Ready for a mid-month update on area Bike More Challengers?!

Maybe the most interesting observation of all comes from the largest category for firms and groups with 500 or more staff. 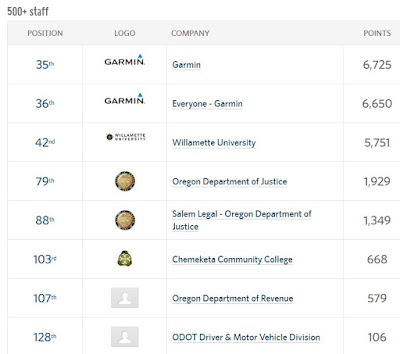 The second place firm, Daimler Trucks, has only 49,170. OHSU is lapping the field!

Unfortunately the Challenge doesn't report a per employee ratio in the summary standings, which might be interesting to compare in addition to raw totals. If you drill into the company profiles, you can see OHSU reports a 2.8% participation rate, but Daimler shows an 8% rate, and Daimler is a much smaller company. So there's that.

Anyway, down here in Salem, Garmin leads the way with 6% participating with Willamette closely behind at 4.4%

And the observation that seems most interesting is that Salem Hospital, who aligned with OHSU recently, doesn't seem to be participating in the Challenge, and bridging the differences in corporate culture on commuting and healthy living seems like a surprisingly big challenge. OHSU is a gold-rated Bicycle Friendly Business and has a very robust transportation options program. By comparison the Hospital is in the dark ages of Eisenhower-era autoism, still committed to building new, large parking lots and opposing an expansion of transit. The spirit of wellness at OHSU is supposed to be contagious!

There's also a lot of sets and subsets and supersets from entities, and so Garmin, Willamette University, and many State agencies have sliced things up in multiple ways, and if you're outside of each business, it's hard to know how best to look at the slices - but not in the end very important to understand.

And hey look, it's a City of Salem sighting! Public Works is holding down second place and they've got a 1.4% participation.

It doesn't appear, however, that the City as a whole is participating, and while our new City Manager may have too much still on his plate this year, there is, it should be said, an opportunity to set an example for all City Staff and to make a stronger City commitment to this kind of Encouragement activity, starting at the top. (It's not too late!)

More interestingly, we should probably be talking a lot more about Corban University. They're out in the hinterlands in the former State TB hospital. (It's one of our best stories of repurposing a former State Institutional building, by the way!) 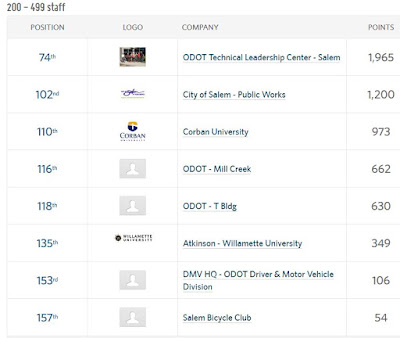 In public comment on the OR-22 study currently underway, people associated with the college said


Students attending Corban University, and other people without a vehicle would benefit greatly from a bicycle and pedestrian path at least from 25th to Lancaster on OR 22. And students would also benefit from bike/ped improvements on Lancaster between OR 22 and Cordon Road.

With Garmin and the University, there's a significant demand for options out Mission Street in addition to drive-alone trips, but because the whole Mission/25th/Turner/Lancaster nexus is such a charlie foxtrot, it has seemed irredeemable.

This demand, which doesn't get the visibility it should, is reason not to give up on this part of Salem. (At the same time, it is also an argument for locating large new businesses closer to the city center so that it is easier to reach them by bus or bike.)

At this size it's a lot of the usual suspects, and mostly public agencies. That seems like one of the main challenges for this kind of Encouragement project is how to get interest and commitments from a larger number of private businesses here. 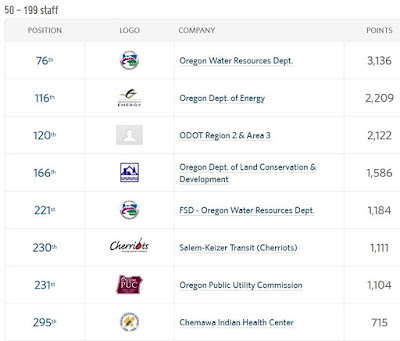 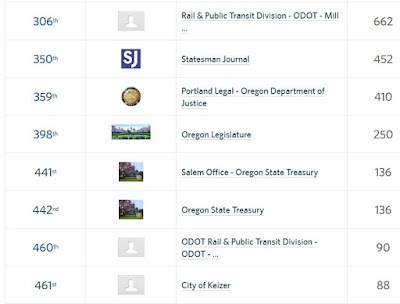 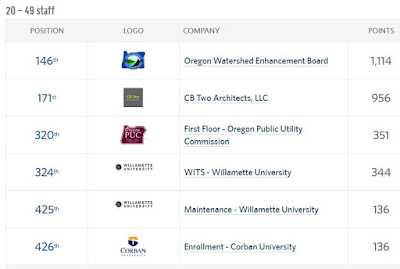 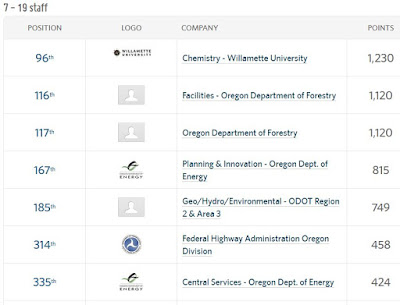 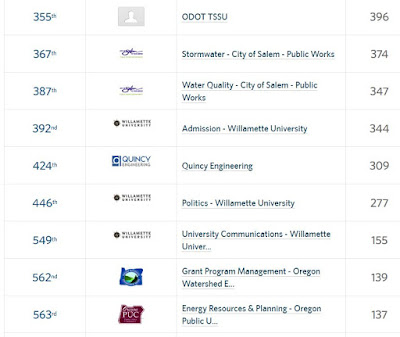 It looks like this year the Northwest HUB is going to challenge South Salem Cycleworks for the prize in this category! 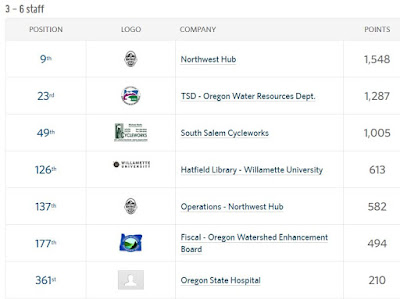 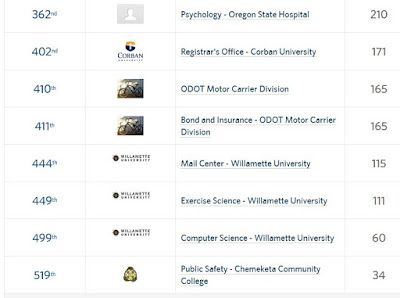 Do you see any other patterns in the aggregate that jump out?
Posted by Salem Breakfast on Bikes at 11:30 AM

The Northwest Hub firmed up details and announced they're hosting an after party on June 3rd at 5pm!