Transitions in vineyard land might seem unimportant, especially on a bike blog, but they're really an indicator, and yesterday's front-page piece missed on an important element there as well. 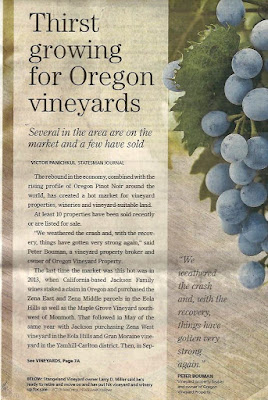 It framed up the vineyard sales this way:


The rebound in the economy, combined with the rising profile of Oregon Pinot Noir around the world, has created a hot market for vineyard properties, wineries and vineyard-suitable land.

Later in the piece there was more about the challenge of succession- and estate-planning, passing businesses on to a next generation, unknown or unknown.

In many cases people or businesses from out of state are buying up the properties:


"Californians are again moving up into Oregon," said Pattie Bjornson, winemaker and co-owner at Björnson Vineyard. "Judy Jordan bought Eola Springs Vineyard, Larry Stone has a large planting and is building a winery on Lone Star Road NW/Hopewell Road NW, and we just sold 80 acres of our 245 acre property on Perrydale Road to a couple from California"...

According to SFgate.com in California, Jordan sold her Sonoma-based company J Vineyards and Winery to E & J Gallo and then purchased Chehalem Mountain Vineyard in the Willamette Valley.

There's an important reason for this, but it's not in the article!

As areas in California suffer from drought and too much warmth for grape-growing, vineyards and wineries will move north, and Oregon will be more attractive for things other than cool-climate grapes like Pinot Noir. Trans-generational California firms might be investing in Pinot Noir vineyards today, but in a generation or two, it seems likely they will be grafted over to Cabernet Sauvignon and Merlot, warmer-climate grapes that prevail in Napa and Sonoma today. The purchases are not just market-driven, but are long-term strategy and risk-hedging.

From a piece a year ago in the Oregonian:


"Just within 40 years, we've seen dramatic change," said Maria Ponzi, president of Ponzi Wines.... "The challenges [we have] are very different challenges [my father] had."

Greg Jones, who teaches and studies how climate change affects wine at Southern Oregon University, says it's entirely possible that the warmer growing seasons of the Napa Valley and Sonoma Valley in California will eventually migrate to Oregon.

There are near-term reasons for Californians to be investing in Willamette Valley vineyard land, but even more important are longer-term structural reasons, and articles on the business of local vineyard land should also discuss this context.

The Northwest HUB has a nice note about a very well-attended event at Scott Elementary School. Look at the demand for bicycling there!

A few years back an article on walking and biking to school featured the lack of sidewalks on Brown Road.

In the intervening time, through multiple slices and funding sources - there's like three or four distinct projects on a length of Brown Road that to the rest of us looks like it is naturally one continuous stretch between Silverton Road and Sunnyview - Brown Road has been scheduled for getting sidewalks and bike lanes.

For a stew of reasons including the fragmented jurisdictions and important demographic factors, walking and biking here almost certainly doesn't get supported with the right proportion of resources. It's great to see HUB and the Bike Club working on that!

SBBA is going to inaugurate their "Slow Roll" series this weekend with a nice, leisurely ride from Englewood Park to Riverfront Park on Saturday at 1pm.

That will be a great way to kick it off.


Steamboat business along 17th street has been on the decrease for the past week or two, owing to the overflow of tho canal near Lansing's rapids, which makes it rough sailing. There has been talk of there being locks put in the river similar to those on the Columbia, provided it does not interfere with the Portland Light & Power Company's rights, when they repair their roadbed. When will that be. Jake?

What are Lansing's Rapids? What does "steamboat business along 17th street" mean?

This passage is completely inscrutable! The actual river is too far distant.

It's probably some joking code that actually means something else.

Do you have any idea?

I don't know if this is a real group in Salem or if it's just spam - or something in between:


Go check out @downtownsalem and give them a follow! Salem is a growing city, especially the downtown area. If you're interested in what's going on @downtownsalem then I highly suggest following them! Tag #insalemoregon and #salemoregon to be featured on our page!

But it's really funny!

There's a guy standing, a little pompously perhaps, in the middle of Liberty in the crosswalk on State Street, and his back is turned to oncoming traffic. The photo is taken from the middle of the intersection.

So unless they got a permit and closed down the street, the image shows a substantial pause in traffic - much more than a mere gap - time and safety for multiple people to position and turn their backs on traffic. (Even the google streetview from August 2015 shows little traffic.)

The City persists in clinging to the idea that we need four full auto traffic lanes here, but we could probably do with three and could convert that fourth lane of carspace to biking and walking space and shopping/dining space.

With our current lane configuration that has more downtown lanes than I-5, if we can take pictures of guys standing in the middle of the road downtown, then that's a sign we've misallocated space!
Posted by Salem Breakfast on Bikes at 9:00 AM

I am in agreement on your comments about too many lanes of traffic running through downtown. I think that with some signage we can divert a lot of commuter traffic away from downtown that is just going to the bridge to West Salem. AtFerry there is already some signage, but we could also encourage it at Court Street for cars to go onto Front Street to use either the on ramp, or if you are not fond of changing lanes and want to go directly into Wallace Road, go around Marion Square Park and enter via Commercial. I use this method all the time during rush hour and it works like a charm...yes, Virginia, people let you in the flow of traffic at Union St.

I would like to see both reduced lanes (dare I suggest two lanes) on Commercial and Liberty, wider sidewalks, a protected bike lane, and return to the grid system downtown. I know, I am a dreamer!

If I were in the wine business I would be very worried that Marion County is planning to expand the incinerator at Brooks and is importing medical waste from out of state. They are interested in profits of course, but just like they found out in Portland the DEQ standards for emissions are not adequate to protect people's health. NO ONE tests the soil for accumulation of lead, cadmium, mercury, and dioxins that the burner emits. For 24 years they have pushed out pollution that covers the Valley north to Newberg, south to the Jefferson and Croisan Creek area and east to Silverton. By expanding the the incinerator with another 3rd burner, importing waste from Metro and medical waste with all those plastics we can expect that the situation will get worse over time.

In France they used to have incinerators in the Champagne area until they found out that their wine was full of lead and other toxins and it was making it unhealthy. That may be our destiny.

But then again, wine is not the only food that is produced in this area. What about the milk?