Normally personnel isn't a topic here, but last summer you may have noticed that Judith Johnduff left the City's transportation planning group. This impacted staffing for the Commercial Vista Corridor Study, and it went a little quiet.


But the Study is back, and will be at the Planning Commission tomorrow with an informational presentation on what looks like the final report.

It may be necessary to revisit this later this week, but at the moment it doesn't look there are any major changes - but it does look a little smaller, like it has been dialed back some to be more modest in totality, and it may be useful to compare the final recommendations to the draft ones in finer detail.

The big things strike me as still being retained.

The crossing and continuation for south-bound bicycling on Commercial at the "dysfunction junction" with Liberty is retained.


One possible omission is that not all the pedestrian medians seem to be shown.

The big picture is that even in an imperfect or suboptimal state, we should want to move forward with the recommendations - something is better than nothing!

You may remember that the beacons and crosswalks was in an ARTS grant application, and that process with the State has also been delayed. Hopefully this summer there will be good news to announce.

This also might merit some follow-up and a separate post, but the Planning Commission has also reversed the Hearings Officer's decision on the proposed May's Landing concept for 96 apartments on 23rd, near 25th and Mission Street. 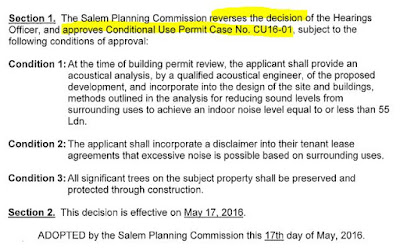 Because this does not seem consistent with a decision Council made on a previous round of appeals, it would not be surprising for Council to call-up this reversed decision. (See comment from Councilor Andersen below.) Still, the Planning Commission apparently voted unanimously, so perhaps the case for reversal is more compelling.

The Planning Commission meets Tuesday the 17th - like everything's happening on the 17th! - at 5:30pm at City Hall in Council Chambers.

(For previous notes on the Commercial-Vista Corridor Study, see here. The City's project site is here. For more on May's Landing see here.)
Posted by Salem Breakfast on Bikes at 12:01 PM

The Mays Landing desision cannot come before the Council and is final. (There still may be site review and other planning/permit issues.) The original decision on appeal from the staff determination was from a Hearings Officer. There can only be one appeal from this decision, either to the Council or the Planning Commission if not called up by a councilor. Since the second appeal was to the Planning Commission, it cannot have a third appeal to the Council. I am the Councilor for Ward 2, where the project is located. I did not call it up for two reasons. First, I saw the "no" decision by both the staff and the Hearings Officer, so did not anticipate that the Commission would do anything differently (as well, I cannot say that the Council would not also have overturned the hearings officer - how's that for a triple negative?). Second, I received no comments or questions from any neighbor or SESNA, the local neighborhood group, which ultimately tied on whether or not to support the project. Post-Planning Commission decision, I met with near neighbors to discuss the matter. Tom Andersen

"Well, I'll be" as they say. That's some procedural jujutsu they did.

The multiple hierarchies and appeal paths is confusing. Thanks for straightening that out.