Yesterday the Street Trust came to Salem and asked the Legislature to allocate better funding to Safe Routes to Schools programming.

Oregon should spend more on transit, bike and pedestrian infrastructure and less on widening freeways, the architects of a proposed $8 billion transportation funding bill heard at a public hearing Tuesday night.

“At the exact time we should be working to ease congestion by making it easier and safer for people to walk and bike, we are doubling down on dirty fossil fuels at the expense of our communities and the planet,” Angel Falconer, Milwaukie city councilor, told the Legislature’s Joint Committee on Transportation Preservation and Modernization in submitted testimony.

As if to demonstrate the need in the worst way, on Monday a person driving a pickup truck struck and seriously injured an Elementary School student walking after school was out. 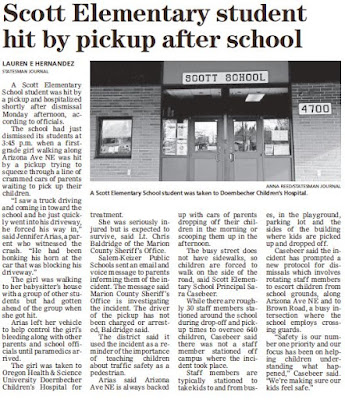 One reason funding has seemed difficult is that victim-blaming is normalized in subtle and not-so-subtle ways.

The framing in this story shows this and seems problematic on several counts:


A Scott Elementary School student was hit by a pickup and hospitalized shortly after dismissal Monday afternoon, according to officials.

A driver, a person driving a car struck the student! This passive voice nonsense ascribing agency to the car itself, and minimizing the driver's agency and responsibility, must end. Drivers are responsible for the safe operation of vehicles, and (at the moment anyway) the cars don't suddenly decide on their own to hit people or to engage in dangerous driving maneuvers.


The school had just dismissed its students at 3:45 p.m. when a first-grade girl walking along Arizona Ave NE was hit by a pickup trying to squeeze through a line of crammed cars of parents waiting to pick up their children.

"I saw a truck driving and coming in toward the school and he just quickly went into his driveway, he forced his way in," said Jennifer Arias, a parent who witnessed the crash. "He had been honking his horn at the car that was blocking his driveway"....

The district said it used the incident as a reminder of the importance of teaching children about traffic safety as a pedestrian.

Anger and impatience by an adult seems to be the core of the problem here, not any careless or distracted walking by a child being a child.

The lack of sidewalks and other safe infrastructure for kids on foot and on bike seems to be a contributing problem. This lack of safe sidewalks exacerbates pressure on parents to choose to drive their kids. There's also a vicious circle here - the more parents feel they need to drive kids, the more dangerous it becomes for kids.


Arias said Arizona Ave NE is always backed up with cars of parents dropping off their children in the morning or scooping them up in the afternoon.

The busy street does not have sidewalks, so children are forced to walk on the side of the road, said Scott Elementary School Principal Sara Casebeer.


While there are roughly 30 staff members stationed around the school during drop-off and pickup times to oversee 640 children, Casebeer said there was not a staff member stationed off campus where the incident took place.

Staff members are typically stationed to take kids to and from buses, in the playground, parking lot and the sides of the building where kids are picked up and dropped off.

Casebeer said the incident has prompted a new protocol for dismissals which involves rotating staff members to escort children from school grounds, along Arizona Ave NE and to Brown Road, a busy intersection where the school employs crossing guards.

"Safety is our number one priority and our focus has been on helping children understanding what happened," Casebeer said. "We're making sure our kids feel safe."

"Seriously injured" sounds like an understatement if she was taken to Doernbecher. This could be a life-changing event with life-long consequences.

She was seriously injured but is expected to survive, said Lt. Chris Baldridge of the Marion County Sheriff's Office....

The message said Marion County Sheriff's Office is investigating the incident. The driver of the pickup has not been charged or arrested, Baldridge said.

I participated in a study of elementary school design in Salem-Keizer with the League of Women Voters back in 1995. We toured about a dozen schools and 4 during school release times. Our conclusion was that it is the design itself that is created by the School District is part of the problem with loading area.

They have a goal of having 'neighborhood schools." This means they embed them into residential areas. While this is good in concept it presumes that children will walk or ride a bike to their local school. Reality is that at least half do not. Part of the reason is the weather in Oregon and part is that parents do not want their children walking alone to or from schools.

The Safe Schools Project is wonderful. I was involved in the early years of bringing it to Salem along with Kate Tarter (who is the real hero of the program). Unfortunately it is hard to get enough volunteers to actually do what was intended...to provide safe walking groups as well as safe walking routes for children.

So designing a school entrance is important as part of the solution and the Salem-Keizer School District has not taken the issue up seriously. They seem to consider it a given that there will be problems and kind of throw up their hands.

Part 2
Back in 1995 the District had just built Yoshiki Elementary. They did not listen to community concerns about the traffic issues and they designed the entrance to the school to be just a one road in and a one road out. That is their "design standard."

I raised the issue of what do you do if there is so much congestion on the neighborhood streets that you can't get an emergency vehicle into the area. The principal was sympathetic, but had no clue of what to do other than have more crossing guards. So, I took the issue to the Facilities Director. He gave me his attention, but nothing much else.

Two weeks after my meeting with this person, my question was answered. A child was struck while in the parking area running to meet her mother. She was seriously injured and needed to be transported by ambulance. However, the ambulance could not get within 4 blocks of the school! Finally they had it go down by Stephen's Middle School which is located next door and drive along the practice field to the location. The delay was about 20 minutes! Thank goodness it was not raining and the field was drivable. After that they built a special entrance for emergency vehicles off Cordon Road with a break away gate so that in an emergency they could gain access.

Part 3
So, did the District learn from this event? You guessed it. No.

When they built Hallman Elementary School a few years later the District once again built it with only one road in and out. Within a few months they realized their mistake, but it took a few years of protests before they finally decided they needed a second emergency access street. Luckily they were able to purchase a small strip of land behind the school to gain limited access. It cost taxpayers hundreds of thousands of dollars to buy this new parcel.

Now the District is going through another huge bond to fix our schools. I don't think any of the money is going to go towards such issues as fixing these kinds of traffic problems.

Scott School is in the neighborhood that I lived in for 30 years. The lack of sidewalks on Brown Road has been an ongoing issue for all of that time. The road is in Marion County and they just put in new sidewalks this past couple of years. Principal Casebeer is relatively new to the school and likely did not know it has been a long fought for need. But of course the County did nothing about the sidewalks on Arizona Street which is the access to the school.

County could make the existing walkway a "No Parking" area as a first step, but it will take a lot of enforcement to make it work.

But of course poor street design is only part of the problem as you rightly point out.

I was involved in the re-design of the parking area that includes drop off and pick up areas for parents and for buses at Swegle School a few years ago. A long standing problem was that Swegle is located on a major arterial of Market Street and it had no sidewalks on one side of the street and limited parking spaces on the other. Parents would park along Market in the bike/pedestrian lane and wave to their children to run across the busy Market Street to the car.

So, we wanted to design something better, of course, when they did the realignment of Market with Swegle Road. The design called for parents to come into the area, park in a regular parking space or get into a "wait lane" to wait for their children. This area would be separate from the actual busy street.

At first there was going to be the typical School District design on one way in and the same way out of this area. But we lobbied for a way that allowed for an in and an out. At first the District agree to make it an 'emergency' exit only, but upon building it, they soon realized that it had to function as a real exit, so they made that change.

Unfortunately, the problem of parents parking on Market and calling kids to cross the street did not go away. I blame the parents, of course. Endangering your child to save a few minutes makes no sense to me, but parents do it.

The Neighborhood Association worked with the school to get more police enforcement, send home educational fliers and even had more teachers patrol the area. I think the final solution (or maybe a partial solution) was to have a new system where the teachers hold the child in an area and will not release them unless the parent comes up to the child to gets them. This means a parent can't call their child to cross dangerously, because the teacher is literally holding the child back!

I hope that in the case of Scott School they can at least get some sidewalks on the one side of the street. But the real solution might require training parents to be smarter and safer.

The pictures of the area do not tell the real story. During the time period when the child was stuck, cars were parked illegally and blocked the street as well as the walkway. Enforcement has to be part of the safety effort too!

The School District wants to build a new elementary school with the proposed bond. I think I might ask what is their design for parent pick up and drop off. Maybe it is an opportunity for change.