Highland Market can be Ingredient in Walkable Neighborhood

Apparently the market at Hazel and Highland has been closed for several weeks. 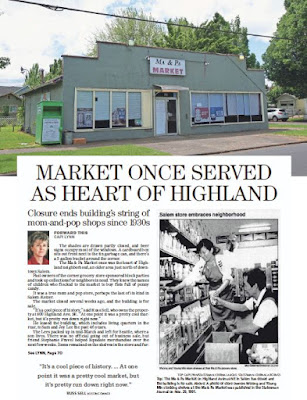 The building's a little shabby and it has some deferred maintenance. It's not on a commercial strip or arterial road, Highland being rated a "collector" street, and as a kind of duplex with living quarters in back, it is almost certainty considered an "illegal" building by our current code and standards. The land's current zoning appears to be for a single-family residence, not for a market or anything commercial. Our current sort-and-separate approach in "Euclidean zoning" is expressly set up to exclude things like this. They are to be eliminated, not preserved or celebrated.

But as an actual corner store smack dab in a residential neighborhood, it should be a central part of what constitutes a real walkable neighborhood!

And there is more here. Kitty-corner is the childhood home of President Hoover. This is an intersection that should have life and many dimensions. It has a latent energy that could be smothered or it could be cultivated.

It may be that there is no economically viable way to use that building as a corner store. The building owner of course has an interest in figuring out an economically valuable use for the property and building.

But the neighborhood and City should also have an interest in a business that offers a pleasant walk for a quick gallon of milk, cup of sugar, cold beer, or pint of ice cream. It should not be necessary to make a driving trip for small grocery runs.

This also seems like it should be a candidate for toolbox loans or grants. Too often it seems like we give City subsidy to projects that are going to happen anyway. Here's a challenging site and worthy project that is not inside of any Urban Renewal Zone, and yet it represents values that might deserve stronger City support than the zoning might suggest.

This transition is a project that deserves more interest than merely nostalgia and deserves some level of city-wide attention.

Though it is surrounded by more multi-family housing - more density - and is near enough to the University that its demographics are very different that those of the Highland neighborhood, New Frontier Market in Eugene at least has a comparable form: It started as a blacksmith and seed store when the area was essentially rural, and now that its neighborhood is solidly residential has morphed into a specialty grocer with organic produce, bulk foods, a small and well curated wine and beer selection.

The corner store, whether in a "convenience" configuration or a more "specialty" configuration, is a typology we need to think more about as we value - or want to value - walkable neighborhoods more.

In last month's minutes of the Highland neighborhood association meeting, there was


concern that the description given in the 2018 City Budget for the 4-to-3 lane conversion safety project on Broadway [between Pine and the Parkway] includes the addition of a northbound right turn lane at Pine Street.

City Staff will be at this month's meeting to talk about it in more detail.

The turn lane could compromise the safety engineering and design, and create inducements to zooming, which the redesign should in part seek to curb. It also could be tied into the prospect of the Salem River Crossing at that location. So it is worth attention also from a City-wide standpoint.