Here's a bit of a stealth project and some very pleasant news.

Though the genealogy from Salem Sunday Streets to Salem Greenway and now to Open Streets Salem is a little murky, it looks like there is a new official and City-sanctioned "open streets" event scheduled for the very beginning of fall, Saturday, September 23rd.

The Highland and Grant neighborhood associations look to be leading it, so it'll almost certainly involved the proposed Winter-Maple Family-friendly Bikeway.

Check out the facebook and follow. More is sure to come! (And they'll probably be needing volunteers to help out.)

ODOT's staring an "Urban Design Guide" and they need to hear that urban streets are not high-speed highways and stroads!


You could also remind them that the National Association of City Transportation Officials has done a lot of the work already, and ODOT could simply adopt those guides as official "standards."

You almost certainly know this already. The bridge


will temporarily close Monday through Friday beginning June 5 for two months. The Bridge will be open to the public Saturdays and Sundays. During the weekday closure, the temporary work bridge will be removed and the remaining concrete retaining walls and bridge paths will be completed....

The bridge will re-open to the public during the celebration event at 4:30 p.m. on Wed., Aug. 2 in Riverfront Park. A passport activity during Downtown Salem's First Wednesday festivities will follow the ribbon cutting. Stay tuned for more announcements about the celebration in coming weeks.

Originally a full closure had been proposed for removing the temporary work bridge, but closing it only during the work week and keeping it open on weekends elicited a strong endorsement from the paper. 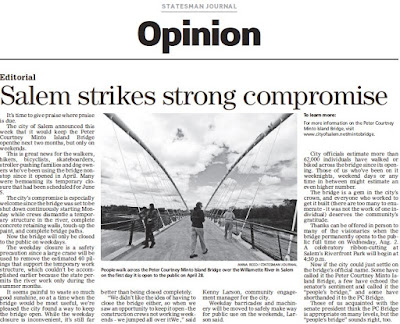 The paper also suggested that some are calling it the "PC Bridge." Really? It remains an interesting question what the citizenry will settle on: Peter Courtney Minto Island Bridge is way too long, and it seems impossible that Salemites and popular culture won't abbreviate it. In addition to "taco," "flytrap" has also made an appearance. One of these metaphors/analogies may stick!
Posted by Salem Breakfast on Bikes at 10:15 AM

Taco Bridge! So apropos for city where about one of every four people is a Latino (nearly all of Mexican heritage). And the number is growing rapidly (just look at our schools). Could Salem become a "minority-majority" community in a few decades? It could happen.

On the same subject, I have had some discomfort riding my bike on the bridge and weaving my way through pedestrians. How about a dedicated bike lane on Taco Bridge?

Not sure yet. For most of May, bike traffic has been 2% of the total on the Minto Bridge.

By contrast, bike traffic on the Union St Bridge has been 26% of the total.

The Minto Bridge may in the end really be a foot bridge, with bike traffic very secondary. We'll see.

There might be a blog post in the future on this, but for the moment it seems like things need more time to settle into "regular" use patterns.

A reader sends word of what looks like a great contest in Eugene to design a parklet. Here's more at the Southwest Oregon Architect, "Eugene Parklet Competition: Details." The City of Eugene and the American Institute of Architects are working together on it.