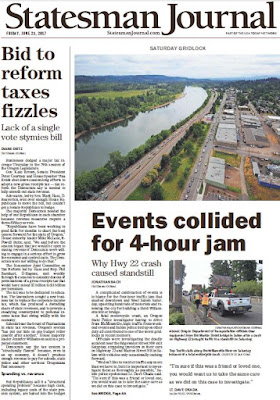 This week over on Facebook, a commenter linked to a recent Transportation Research Board meta-analysis, "Closing the Induced Vehicle Travel Gap Between Research and Practice."


Several studies have rigorously documented the induced travel effect, in which added highway capacity leads to added vehicle travel. Despite the evidence, transportation planning practice does not fully account for this phenomenon, with the result that estimates of the potential congestion-reducing benefits of added highway capacity may be overstated and estimates of potential environmental impacts understated. [italics added]

Here we are. "Despite the evidence..."

The bibliography, that list of evidence, is not slender:

The American Economic Review publishes peer-reviewed papers and is one of the most highly regarded economics journals. It's no publisher of hippie bike kumbaya. It comes at the question from a professional discipline other than traffic engineering and planning. It's a purveyor of cool dollars-and-cents analysis.

Two University of Toronto economists found evidence for induced demand (an effect that had sometimes seemed more anecdotal - or skeptics insisted it was anecdotal as a way to dismiss the effect - than statistically verified) and that we had plenty of roads. As economists, if they thought that road expansion was economically useful, they would say so!

From "The Fundamental Law of Road Congestion: Evidence from US Cities" by Gilles Duranton and Matthew A. Turner:


We find that vkt [vehicle kilometers traveled] increases proportionately to highways and identify three important sources for this extra vkt: an increase in driving by current residents; an increase in transportation intensive production activity; and an inflow of new residents....We also estimate the aggregate city level demand for vkt and find it to be very elastic. We conclude that an increased provision of roads or public transit is unlikely to relieve congestion and that the current provision of roads exceeds the optimum given the absence of congestion pricing. [italics added]

The paper is available for free at the moment, and together with the others it should be at the center of the debate over the Salem River Crossing. 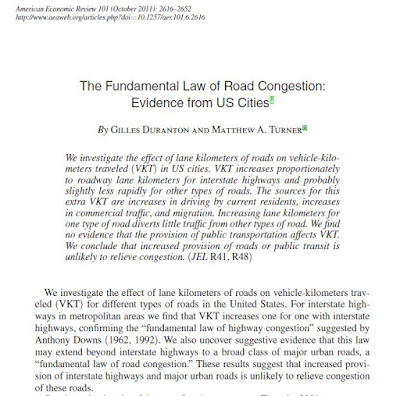 From the standpoint here, not everything is great in the study: It concluded that public transit doesn't help, either.

Congestion pricing it turns out is the most important element in accurately matching supply and demand for roads. They also conclude that in general we have an excess of capacity, an over-supply of roads and road space that is inefficiently utilized.

Others have follow-up on this work. Here's a clip on a paper from California, for example.

The TRB meta-analysis on "Closing the Gap" appears to be an extension of this California paper:


This paper [the TRB analysis] summarizes the Caltrans review and shares the findings to advance understanding of induced vehicle travel effects and suggest steps for additional research.

When you are stuck in traffic, it is easy to be seduced by the blandishments of a giant new highway and bridge and the prospect of free-flow. It might seem like an obvious solution. But it is no such solution, and after a tremendous expense, and the opportunity costs of not doing other valuable things, traffic will simply slow again without any enduring benefits or structural changes in mobility.

And it remains true that demand is unevenly distributed in time, and rather than increasing supply of road space for both peak and off-peak demand, we should employ strategies, like congestion pricing, that realign demand in time with existing supply. A commitment to a giant bridge and highway is to treat the toolbox as if it only contained a hammer and had no other tools.

As for the temporary problem of crashes and incident response, a system of flex-lanes and contra-flow lanes on the existing bridges would certainly handle temporary detours better than the system we currently employ.

Earlier in the SRC process a permanent "two-way" system was briefly considered and eliminated, but it should be revisited in the context of the seismic retrofit of the Center Street Bridge and parallel plans for incident and emergency response.

Because the SRC process has been framed with a predetermined outcome in mind, it has not adequately assessed other approaches to cross-river mobility. Preferring a megaproject solution, we have refused a suite of smaller solutions which in concert could achieve the same or even greater ends. Options other than the giant bridge and highway have not been give a fair shake. I don't think it's a conspiracy or anything, but a consequence - but for some it is in fact an incidental "feature" rather than a bug - of this approach is to make traffic on the bridges worse in the near term, as if to rachet up the pain and apparent "need" for a new bridge.

You will recall that in "Approach to Analysis of Transit/TDM/TSM Options," the project team makes explicit that "investments in alternative modes" are being slighted in favor of "the needed highway improvements." They know it's problematic, subject to challenge, as they say "the proposal has also been reviewed...[as] appropriate and defensible...." (Indeed, LUBA will consider whether it is "appropriate and defensible"!)

An improved, sensible approach to incident management is one casualty of this exclusionary, go-big-or-go-home stance.

For people angry about a huge traffic jam, it's a complicated message, a bit of a counter-intuitive one that doesn't fully address the immediacy of frustration and even rage during the jam, but they should direct their anger at the SRC process and its champions which have systematically eliminated or disparaged smaller, incremental kinds of solutions that could be implemented more quickly.

There are lots of things that can be done about cross-river mobility. By digging in on the totalized "solution" of the big bridge in the Preferred Alternative, policy-makers exacerbate current problems, and push solutions off to some distant future contingent on big funding.

Bridge advocates say "build it now," and there are lots of things we could in fact do in the near term. In way they are absolutely right. Even the State Highway Plan calls for implementing higher priority measures first. It's all there for the taking.

It is the megaproject and the intransigence of the SRC process and its champions that is short-changing people, not the critics of the Preferred Alternative and its expense.
Posted by Salem Breakfast on Bikes at 1:00 PM