The State Street Corridor Study is back! This afternoon the 28th, the Advisory Committee meets to review a couple of memos, one evaluating three road designs and another evaluating zoning, land use, and redevelopment.

You may remember concern that the project team is using the soon-to-be obsolete analytical framework of hydraulic autoism in their analysis. Note all the "flow" language here. From Chapter 3 of the road design memo:


3.1 ANALYSIS METHODS
The Mid-Willamette Valley Council of Governments (MWVCOG) travel demand model was used to estimate traffic volumes for the 2035 build Alternatives. The base year of the MWVCOG’s model is 2009, and the future year is 2035. Post processing of the volumes was performed as described in ODOT Transportation Planning Analysis Unit’s (TPAU) Analysis Procedures Model (APM). The Build Alternative assignment plots have been reviewed in detail to determine if any manual reassignments are needed. Then, the next step was to compare the model future No-Build and Build scenarios. The National Cooperative Highway Research Program (NCHRP) growth and difference equations were applied to the No Build and Build scenarios to determine the 2035 build design hourly volume (DHV). Then, the inflows and outflows at each intersection based on 2035 build DHV link volumes were calculated in order to make sure that the inflows and outflows were equal for each intersection. Where there was a difference between the flows, the overall difference was applied to each of the flows by increasing or decreasing link volumes in proportion to the total flow volume. The next step was to determine the intersection turn movements using a spreadsheet method. Finally, network volume balancing was performed and the volumes were rounded to obtain Future Build DHVs.

Going out to the hundredth decimal (0.92, 0.93, 1.14, etc.) is almost certainly just a whacknut level of prophecy for 20 years out, totally outside of the real margin of error or of a 95% confidence interval. Though this is industry standard rhetoric and procedure, it is also prophecy and gibberish dressed up to sound like science. But it's not science.

Less polemically, this is a exact example of the false level of precision in traffic modeling that carries then a false certainty into policy making. (Just look at how wildly off were predictions made around 1980 for traffic counts in the year 2000. We've also seen how modeling on the Salem River Crossing has not responded to real world conditions. Even with better models today, we still grant a ridiculous confidence to the precision of their outputs for future conditions.)

There are also questions about the model's adequacy. Paris recently closed a major road to cars and found that the total number of car trips was reduced rather than simply displaced. Our models assume car traffic is like water that must be diverted when it is "bottlenecked" or "dammed" on an artery. There are reasons to think this is false now, and even more reasons to think it will be false in the future.

Fortunately, there is also a Levels of Service analysis for non-auto travel.

MMLOS is a measure of the user perception of their experience on a particular transportation facility, on an A through F scale, and is described for each user type below. The simplified methodology produces a range of probabilities that a certain segment will be perceived by a user at a LOS A, B, C, D, E, or F. In some cases, a range of letters is reported to reflect differences in individual user perceptions, as well as differences in user perceptions that may occur due to other factors not represented in the calculation, such as the presence of on-street parking. In other cases, engineering judgement, based on the known context of the facility, is applied in order to identify the level of service.

It's still swamped by the car LOS analysis, but this approach is still young and is a legitimate advance on the analytical procedures that had previously just simply disparaged walking and biking as the problem of "pedestrian impedance."

The land use memo is also interesting. The lots that seem especially promising for redevelopment are worth a look.

And of course an extensive discussion of parking in chapter 7. 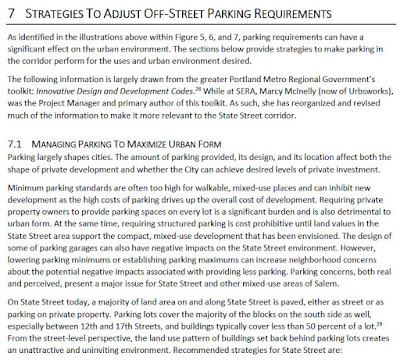 
Price Parking Correctly
It is important to get the pricing for public parking correct. The conventional approach is to provide free curb parking. However, on-street parking directly competes with parking garages in meeting demand. Strategic pricing strategies that vary parking costs between different areas can influence consumer choice and help ensure that parking, which is a valuable public resource, is used efficiently and effectively. Thus the price of parking in a garage should be lower than the price of on-street parking along the primary commercial arterials. Likewise, parking can be free in more desirable areas except during certain hours of the day with peak usage. A more complex and expensive system can also be developed to vary the prices of on-street parking from one street to the next. This can be further managed by implementing “real-time” pricing in order to make available a certain percentage of parking spaces at all times.

Techniques that make consumers aware of the true cost of parking are relatively new. Yet these approaches, combined with approaches that implement duration and price variables, may have higher rates of success in changing parking behavior because they allow users to make individual economic choices. Simply providing additional supply to meet perceived demand is not a sustainable practice, but linking price with consumption can lead to more rational decisions and a reduced demand for parking.


The Stakeholder Advisory Committee for the State Street project is scheduled to meet on Wednesday, June 28, 4-6 p.m., in the lecture hall at Center 50+, 2615 Portland Road NE, Salem. The public is invited to attend. The committee will review and discuss the revised land use and street design options for the State Street corridor.

The materials in the memos and the committee's subsequent discussion will be digested and presumably return in an easier to understand form and another Open House later this summer or early fall.
For all notes on the State Street Study see here.
Posted by Salem Breakfast on Bikes at 12:01 PM

The City's announced a July 25th Open House. There will be a post on that closer to the date.

It's a little disappointing to read this:

"[T]he consultant team, working with the City, analyzed the Road Diet alternative – converting State Street into two travel lanes in each direction with a center-turn lane – and found that it could work if roughly a third of the projected traffic in the future diverted to other streets. She stated that the City was not confident this amount of diversion would happen, so State Street under a road diet could experience significant congestion. The City therefore applied for and received additional State funding to further design and analyze two additional street designs....

City staff’s recommendation for a street design alternative was [therefore] the Hybrid alternative.."

There will be more to say on this as the Open House is nearer!