Back in December, Council approved a $749,000 Opportunity Grant for the Park Front Building, a project that was already in progress, had tenants lined up, and did not necessarily need the funding.

On Monday, Council will consider a $3,000 grant, about 0.5% of the Park Front subsidy, for six bike share stations in downtown.

Capitol City Cycleshare* says they have raised about half of the $80,000 they want right now, and leveraging a bit of City seed money could help finish things. (They are crowd-funding a $10,000 chunk as well.) The grant is intended to cover five years. So the investment then is $600 a year.

Another comparison to make is our investment in public art. The first art pedestal with "The Cube" cost at least $25,000. I think it's an inert failure. Two murals are going up this summer. "Waldo Stewards" looks like a win, but "Mirror Maze" looks like a candidate to be a backdrop for more interesting graffiti. In the public art program we are spending much more per installation, and yet we tolerate some risk and some duds. Heck, we're even paying the Willamette Queen $250,000 a year for not contesting the Minto Bridge. By these standards a $3,000 investment in bike share is very paltry. (Should we just call bike share "public art" and fund it that way? It's certainly more interactive!)

Relative to an office building that was already a sure thing, to our new public art program, and to paying off the river boat, bike share is a far more worthy risk! In broad terms, this small investment should be a no-brainer.

In the details, there are things yet to figure out, however. It remains unclear that the system would be more than mainly ornamental, a tourist amenity and emblem of a certain hipness. It's possible bike share here would be a fad rather than something enduring. But even if it struggles or tanks, it would be a noble failure, a project worth trying.

At the same time as Council is making this investment - assuming they do - Council should redouble efforts for protected bike lanes downtown, to make a system inviting for prospective bike share users.

Right now, outside of the path system in Minto, Riverfront, and Wallace Parks, there's not a good network of routes for infrequent cyclists. And given the number of people walking on those paths, it's not clear that we want to shunt a good deal of bike traffic onto them.

One of the big questions about bike share is whether we have a low-stress network sufficiently large and connected for meaningful cycling by people who aren't already skilled and confident cyclists. Places for Bikes initial Network Analysis thinks that we do not. Downtown and its destinations are especially red!

To give a small grant, do little more, and then turn around and wonder why it's taking so long or it shows a small number of riders would not be fair.

Council should consider a follow-on plan, with measurable goals and parallel municipal investment in other facilities, in order to maximize the chances for success. The interesting question is not "will it succeed?" but "what would it take to make sure it succeeds?" Don't hang it out to dry.

You have already seen the way the proposal to purchase a different segment of the Marine Drive right-of-way was mischaracterized as a proposal for a "bike path to nowhere."

With that came sentiment about a "giant agenda to force people to ride bikes" and a lot of other criticism of people who bike and of bike mobility.

A post on the new buffered bike lanes on High and Church attracted a great deal of criticism for the lanes and the people who use it (and here, kids who remained on the sidewalk and did not use the lanes).

And maybe most crucially, the Mayor's patronage helps both willful and innocent misunderstanding to flourish. 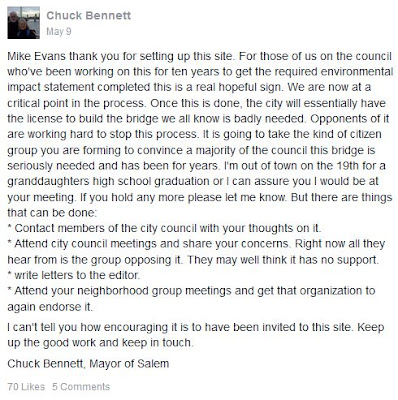 Especially if the appeal at LUBA prevails, and parts or all of the UGB/TSP decision is remanded to the City, Third Bridge advocates will be looking for wins, and I'm afraid they may harness the anger and go after bike facilities in order to have some solid accomplishments. The scale will be all wrong, but the psychology of wins in movement-building may not be.

In all seriousness, this is something to watch.

* And if it's not too late, consider "Capital City Cycleshare" instead?

For previous notes on bike share and the Capitol City Cycleshare project see here.
Posted by Salem Breakfast on Bikes at 9:00 AM

(Probably no one cares, but it was a gloriously hot first weekend of Summer, and there likely won't be a "part 2" on the Council agenda. There's the ADU Hearing, Budget and CIP stuff, Downtown Parking District tax and budget, update on the Strategic Plan, important things, but maybe nothing new to say on them - and too much sun!