In the Neighborhoods: Ass-a-Hell Bush and the Salem Clique!

Have you seen the newish signs at Bush Park? 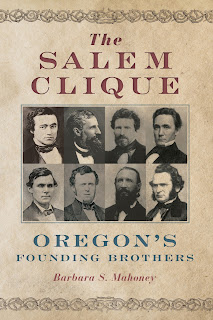 History's in the air.

This week at SCAN, Barbara Mahoney, author of the forthcoming The Salem Clique: Oregon’s Founding Brothers, and probably our greatest current expert on Asahel Bush, will talk about Bush and his political gang.

Bush is the most significant influence on Salem, right? Who else has a greater claim to shaping the city and its culture? He's got to be it. Even though we might look to others during the pre-statehood settlement era, Bush's influence lasted through the second half of the 19th century and into the 20th. He scores major points on longevity.

But it's not an unambiguously positive influence, and we should be talking about it more! One of his nicknames was "Ass-a-Hell," after all.*

So this presentation could be an opportunity to learn more and to think more critically about the ways Bush was great for Salem - legacy things like Bush's Pasture Park - and maybe ways he and his legacy weren't so great.

South Central Association of Neighbors meets Wednesday, August June 14th at 6:30 p.m. in the Pringle Community Hall, 606 Church St SE.
* See Mahoney's Oregon Encyclopedia article and her "Asahel Bush, Slavery, and the Statehood Debate," in Oregon Historical Quarterly for more. The Oregonian just published a review of the book, though it's more of an overview and summary than a critical appraisal.
Posted by Salem Breakfast on Bikes at 5:00 PM

It was a Gremlin! No idea how "August" got anywhere near that. Thanks.

And if the 14th doesn't work, there is a similar program at the Mill the next night on Thursday the 15th at 5:30pm. It's part of their "History in the News" series.

"Accusations and allegations about “fake” news and the manipulations of “mainstream media” aren’t unique to America in the twenty first century. Power, politics, and the press have mixed together throughout Oregon’s past, from vicious editorial exchanges between Asahel Bush’s Oregon Statesman and Thomas Dryer’s Oregonian during early statehood to the muckraking journalists of the early twentieth century and beyond. Join us for an enlightening conversation about the history of journalism’s role in educating, empowering, and enraging Oregonians.

History in the News is FREE and open to the public! Food and drink will be available for purchase."