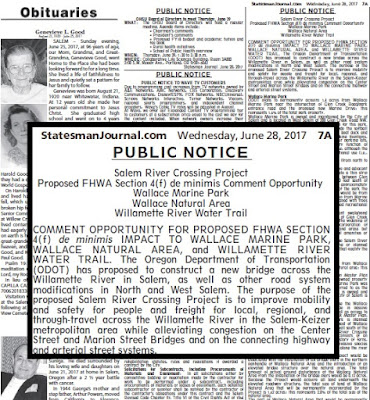 If you weren't scanning the obituaries in the paper or electronic facsimile today, you might not know about a new "comment opportunity" on the Salem River Crossing.

This notice is seeking comments explicitly related to the proposed Section 4(f) de minimis findings described herein, not to issues related to any other aspects of the Salem River Crossing Project. Comments on the Project itself can be provided following the publication of the Final Environmental Impact Statement (FEIS). FHWA expects to publish the FEIS for the Salem River Crossing Project near the end of 2017. The Record of Decision will address all comments received within 30 days of the publication of the FEIS. Comments received before July 12, 2017 in response to this notice that are not relevant to the Section 4(f) de minimis findings presented in this notice will not be considered as part of FHWA's Section 4(f) decision-making process.

FHWA will consider all Section 4(f) related comments on the proposed Section 4(f) de minimis findings prior to making a Section 4(f) decision for each of these three resources. Please provide written comments regarding the proposed Section 4(f) de minimis findings for Wallace Marine Park, Wallace Natural Area, and the Willamette River Water Trail no later than July 12, 2017 by contacting Anna Henson, ODOT Region Environmental Project Manager, via US post mail or email at: 100 Antelope Road, White City, Oregon 97503 OR Anna.Henson@odot.state.or.us. Please contact Anna Henson at 541.774.6376 if you have any questions.

So "de Maximus" is de joke, not a real category of assessment. Here's a discussion at the FWHA site of the real category:

So establishing an "adverse effect" is important in public comment to contest a de minimis finding.

Comments submitted by the Glenn-Gibson Creek Watershed Council back in October get at some of the issues. It might be a good starting point for considering the more narrow de minimis findings. Willamette Riverkeeper's comments are shorter, but also relevant. Our Parks and Recreation Board mainly punted on it.

Its claims are the ones to contest directly. As the notice says, "This notice is seeking comments explicitly related to the proposed Section 4(f) de minimis findings described herein, not to issues related to any other aspects of the Salem River Crossing Project."

These are not arguments we have pursued very closely here, so at the moment others will have better thoughts about how best to engage the particular topics and assessments.

Maybe there will be more to say in another post. (If you know of other particularly relevant documents in the record, please drop a comment or link!)

Though it's not linked on the City's home page, there is a City page and announcement about this, "Input Requested on Wallace Marine Park River Crossing Impacts."

Advocates with a special interest in parks and waterways have started circulating some points for analysis and comment:
The incomplete archaeological assessment of McLane Island might also be relevant.

Advocates suggest that the City of Salem Parks and Recreation Advisory Board will return to the question formally. So look out for that meeting. They also suggest copying the comments sent to ODOT to our Parks Advisory Board, c/o Toni Whitler twhitler@cityofsalem.net.
Posted by Salem Breakfast on Bikes at 5:00 PM

Updated with additional comment from parks and waterways advocates.

This area and the island are part of the Willamette Greenway. Is there some language in that law that can help?