Equivocating on the word Implement: Our Double-Standard

One of the things that has been striking about national politics is how important norms and institutional culture have proven to be in the interpretation of what otherwise had seemed to be unambiguous traditions and laws, even with regard to the Constitution.

Here, it has been striking how our norms in favor of autoism allow us routinely to ignore what otherwise would be the plain meaning of policy to curb that autoism.

A few nights ago N3B and others reported that the West Salem Neighborhood Association voted 302 to 49 to support a new resolution in favor of the Salem River Crossing.

This should not be surprising. For even if tolls are unpopular, tolling is a second-order assessment of the Third Bridge, and the first order assessment "golly, I hate being stuck in traffic and we really need a new bridge" is widely popular. Hydraulic autoism is not merely the engineering and planning paradigm, it is popular culture and norm. Even the City of Portland, with its bike culture, Trimet, and Climate Change Plan, is behind the Legislature's highway expansion projects.

In that context, norms and even statutory interpretation flouting the plain English meaning of policies like "decrease reliance on the SOV" (single-occupant vehicle) and "implementation of transportation system and demand management measures, enhanced transit service, and provision for bicycle and pedestrian facilities shall be pursued as a first choice for accommodating travel demand and relieving congestion" have been banal and customary for a long time. We wink and nod at them, but make sure our actions are only token gestures, enough to give a legal fig leaf for compliance and give the illusion of actually doing something. Our efforts are at best piece-meal, and never systemic. Other mobility is dismissed as "not realistic."

Our prevailing interpretation is as if we wanted to "decrease reliance on eating meat" and primarily sought to accomplish this by adding extra parsley to decorate our plate of prime rib. Parsley! Green! We treat other mobility like garnishes on the main dish of autoism. We are not interested in doing the actual recipe development and cooking for tasty and satisfying meals that don't involve meat or have meat at the center, meals that would be appetizing to people who don't already identify as "vegetarian." (Marinated tofu only gets you so far.)

Since there is this disjunction between policy and its interpretation, between aspirations and conventions, between goals and norms, it is appropriate to hope that the Courts might redirect interpretation back to a plain language sense of the policy. Our norms have some catching up to do, and this is a good time for the Courts to point this out and restore the plain meaning of policy. (Of course, LUBA might not do this! They might not yet be able to perform the Gestalt switch to see the system of autoism clearly.)

In this regard, the functional meaning of the word "implement" remains a matter of some interest. In reviewing some of the previous discussion, it looks like there is another piece we missed the first time.

You may find this tedious, and might even say it's not relevant at all. But from here it looks like an equivocation is also at the center of the SRC's case.

In the memo from October 14th, 2008, "Approach to Analysis of Transit/TDM/TSM Options," the project team uses what I think we would agree is the ordinary sense of the word "implement": 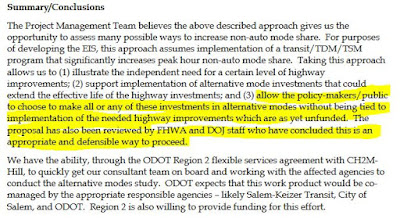 
For purposes of developing the EIS, this approach assumes implementation of a transit/TDM/TSM program that significantly increases peak hour non-auto mode sh are. Taking this approach allows us to (1) illustrate the independent need for a certain level of highway improvements; (2) support implementation of alternative mode investments that could extend the effective life of the highway investments; and (3) allow the policy-makers/public to choose to make all or any of these investments in alternative modes without being tied to implementation of the needed highway improvements which are as yet unfunded. The proposal has also been reviewed by FHWA and DOJ staff who have concluded this is an appropriate and defensible way to proceed.

See in particular clause (3), to "allow the policy-makers/public to choose to make all or any of these investments...without being tied to implementation of the needed highway improvements." [italics added]

Previously we argued here that this makes them wholly optional.

But this phrase "without being tied to implementation of the needed highway improvements" also uses the ordinary understanding of "implement" as fund/construct/actually do.

This may be the only context in which it is used this way in the SRC.

One of the elements on appeal at LUBA is that transportation demand management measures and walk/bike/bus measures must also be implemented first before building new highway capacity.

But the City says that analysis and theory is sufficient to meet the meaning of the word "implement":

In this way the SRC process equivocates on the word "implement" and trades on two different meanings for it.

It should settle on one meaning and use it consistently throughout!

Again, you might this this a trivial nit, but the inconsistency is one of the ways the SRC process seeks to obfuscate and is built on faulty foundations. Maybe it's not as central as it seems here, but it's certainly a piece of the puzzle. In any case, it is a sign of the way we treat non-auto mobility like garnishes and side dishes for the main dish of autoism. The way this slides through largely unnoticed is a symptom of our norms nearly all in favor of autoism.