Buried a little in the post on the Truitt Bros. facility, you might have seen the brief note on a senior living and nursing home facility proposed for Front Street between D Street and Mill Creek.

It is at the Planning Commission this evening. (Agenda here, full Staff Report on the nursing home complex here.)

They will knock down the existing warehouse and replace it "with two buildings, a 48-unit memory care facility and a 69-unit assisted living facility."

There are a few interesting, and one or two even a little perplexing, matters raised in the Staff Report. It's hard to have a settled opinion on the nursing home complex - it's good in some ways, maybe not so good in others - but it seems worth registering the proposal with a little bit of comment, perhaps to come back to later.

Overall, it's a bit of a bummer that for two prime riverfront parcels (at Boise being the other), a nursing home seems to be most viable. People of all ages, including seniors of limited mobility, deserve beauty. So it's not like this is wrong. But if the goal is for walkable mixed-use neighborhood here along the riverfront, nursing home facilities are not the most vibrant or active, and it will be necessary for other adjacent developments to be more active if the district is going to be fully vibrant. This nursing home thing is just very middling and ordinary.

In the note on the Truitt Bros facility you saw the concept for a 15 foot easement and 10 foot path along the river and creek. This is conceptual at the moment, and not something the project seems to be committing to during the initial construction phase. So that's something to register and come back to. A 10-foot path is on the narrow side, however, and it's interesting that it terminates at the creek without crossing north. That could come later, of course, but the circumferential and narrowish path rather than a continuous length of wider path along the river is an underwhelming vision.

It will be interesting to learn more about what is "not acceptable."

And from ODOT Rail there is the tricky prospect of a Rail Crossing Order:


The proposed residential facility will be located adjacent to an active rail line (PNWR) which inherently raises rail crossing safety concerns. Furthermore there have been recent rail vs vehicle incidents in proximity of the D Street crossing which, as proposed, is in alignment to the proposed entrance to the facility. The addition of vehicular and pedestrian traffic to and from the proposed facility will increase the prospect of train vs vehicular incidents. Train horn noise should be considered especially in light of the proposed usage of the facility. Elderly residents would likely be disturbed at any time of day or night when the train horn sounded at the D Street crossing and surrounding crossings.

The proposed 26' entrance to the facility will change the dynamic vehicle characteristics of the crossing at 'D' Street (US DOT 067029K) and thereby constitutes an alteration to the crossing. A Rail Crossing Order issued by ODOT Rail and Public Transit Division will be required. Initially a Rail Crossing Safety Diagnostic will be held. This diagnostic meeting should be conducted at the earliest opportunity once confidence is high the development is going to move forward.

Who knows what complexities are encoded all in that! Things could go sideways.

The zoning, with the envisioned transformation of the area, is also worth notice:

"Residential Care" is not a very exciting way to meet the "High-Rise Residential" designation! The taller building looks to be only three stories, so that's not very "high rise," either.

It's also a question how much the "River Oriented Mixed-use" and "High Rise Residential" clash with all the restrictions the Railroad is able to impose because of issues around Rail Crossing Orders. Is this a real curb on redeveloping the riverfront properties?

On parking there is fortunately a proposed reduction. The official minimum is staggeringly high!


616.030(d)(1)(A) - Off-Street Parking.
(i) Off-street parking areas shall have a scale, orientation, and location that support a pedestrian-oriented mixed-use residential and commercial district.

Finding: The applicant has requested a Class 2 Adjustment to reduce the offstreet parking requirement for the use to a level which is more appropriate based on the needs of this specific use. Landscaping and a 3' foot tall wall will minimize the visibility of parking areas adjacent to Front Street NE....

The statement provided by the applicant explains that the Institute of Transportation Engineers 4th Edition of "Parking Generation" states that the peak parking demand at Assisted Living and Memory Care facilities is between 0.37-0.47 vehicles per dwelling unit. Many residents in assisted living no longer own motor vehicles and purposely curtail their personal transportation. Most of the parking demand is from staff and visitors. There are 117 units within the facility with 87 parking spaces provided on the proposed site plan (0.74 spaces per dwelling unit).

The applicant is proposing a parking requirement that is suitable to operate the facility accounting for the parking needs of staff, residents and visitors, while limiting excessive amounts of paving. Staff finds that the Adjustment to reduce the off-street parking requirement is equally or better met by the applicant's development plan.

Holy smokes. Fortunately it looks like the proposed reduction is not only reasonable, but is prudent.

A little bit of widening, including a sidewalk, for Front from a 60 foot ROW to a 72 foot ROW:


Finding: The existing configuration of Front Street NE does not meet current standards for its classification of street per the Salem TSP. The applicant's site plan proposes a design for street widening that limits impacts to the existing pavement and railroad tracks. The proposed street improvements and right-of-way dedication meet the widths specified in SRC Chapter 803. Modification to the existing pavement section is not required except for surface preparation as needed to accommodate the pavement widening. Construction plans shall be approved and secured per SRC Chapter 77 prior to building permit issuance, and the improvements shall be completed by the applicant and approved by the Public Works Director prior to occupancy.

Condition 5: Along the development frontage of Front St NE, widen and construct a half-street improvement to Minor Arterial street standards as specified in the City Street Design Standards and consistent with the provisions of SRC Chapter 803. Modification of the existing pavement is not required except for minor surface preparation as needed to accommodate the pavement widening.

This may mean that the west side of Front Street will get a bike lane here. There is room for it, anyway.

Grocery Outlet is just a block away, and this area could become very attractive. It's underutilized and a bit empty right now, so some gentrification would be welcome.

Maybe you will see a reason to criticize it or praise it more strongly, but from here it looks, again, like a middling thing that deserves no strong feeling one way or the other.

Here's more on the whole zoning question and the way we might be failing to create a "mixed use" and "high rise residential" neighborhood. 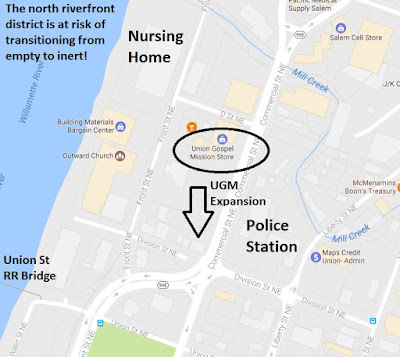 Between the nursing home, the proposed expansion and shelter for the Union Gospel Mission, and the new Police Station, altogether these are not going to create a vibrant neighborhood.

Well, it's nearly a year later, and as it happens, the project is getting tangled in the debate over the UGM shelter relocation.


[T]he proposal has become enmeshed in a debate about the future growth of north downtown and whether Salem City Council members should green light a 300-bed homeless shelter nearby. The council is poised to reach a decision Monday....

During an April hearing at City Hall, [the] local developer...who is appealing the UGM expansion with the city, pointed to [the nursing home] campus as "exactly what was hoped for when the Riverfront Overlay Zone was passed." The overlay zone is in place to attract mixed-use development.

[The developer] said, "I and others have great concern about projects like that coming into jeopardy if a 300-bed facility is right on top of it."

The Statesman Journal asked [the nursing home developer] if he felt his development would be in jeopardy if the homeless shelter expansion were approved nearby. He responded by email, "Yes," but didn't elaborate.

Is nursing home really "exactly what was hoped for" with the overlay zone? I still see a better lens for thinking about the area as the prospect of a whole district of social service delivery - which include the Police Station, UGM facility, and nursing home. It's not one of them in isolation that might be problematic; it's the bundle of them.
Posted by Salem Breakfast on Bikes at 7:00 AM

(Edit: Added a brief note on the proximity to the proposed UGM expansion and new Police Station site.)

The Railroad Crossing scuttled the apartment complex by the Carousel that lead to an expansion of the Riverfront Park. It looks like it would be a problem here since the City has no say over getting that permit.

As a founder of the former "Save The Greenway" (a group formed in 1994 to protect County plans to expand the old garbage dump) I lament the idea of not keeping as much green in the Greenway as possible.

It is nice to see the warehouses being replaced, but it there are going to be replaced by just more obstructive structures, what good is that to the State plan adopted by the Legislature and supposedly required to be protected by municipalities?

What you say about the Greenway is interesting. The approvals on the project say that because a 30-foot view is preserved north and south along the river, the requirements of the Greenway are met. The "view corridors" are not from Front Street, or the interior of the city, to the river. Instead they run along the banks north and south.

And "high rise residential" zoning has seemed compatible with it, so it's not like the Greenway requires a full block width of riparian habitat or parkland or very low-rise development. A path system and high rise residential seems to be goal in tandem.

I have not paid close attention to the Goal 15/Greenway "assignments of error" on the SRC/UGB appeal, and maybe there will be more to say with regard to that matter and possible linkages here and there.

The project was approved and the Decision is an Information Item on the Council agenda for tomorrow. It looks like there were no major changes from the Staff Recommendation.

Added clip from today's paper on the project and its potential relation to the UGM shelter relocation.