State Bike Committee to Focus Thursday on Salem; More on Legislature at SKATS

In addition to the talk at SCAN on Asahel Bush and the Salem Clique (that's a band name for sure!), there are a couple of other meetings this week. But really, they can't compete! Here's another blurb on the "Oregon Style":


The 1850s and 1860s were tumultuous decades for Oregon politics, with rival newspapers indulging in unrestrained attacks on their competitors and opponents. The most notorious practitioners of what became known as Oregon-style journalism were Asahel Bush of the Salem Statesman, Thomas Jefferson Dryer of the Portland Oregonian, and William Lysander Adams of the Oregon Argus (Oregon City). Bush, the “Ass of Hell” to his enemies, served the interests of the Democratic Party; Dryer spoke for the Whig/Republican Party; and Adams spoke for the fading Whigs.

In the midst of their incessant and noisome editorial invective, the three newspapers battled over many issues, including the location of the territorial and state capitals, political appointments, statehood, and slavery. In an age without libel laws and few restraints on journalist haranguing, Oregon newspapers indulged in a series of “take no prisoners” colloquies, with Bush indicting Dryer for engaging in “the grossest personal abuse, the most foul mouthed slander, grovelling, scurrility, falsehood and ribald blackguardism.” Such exchanges moderated in the 1870s with the adoption of a libel law and the formation of a state press association with a professional code of ethics.

What is both more entertaining and more relevant locally than this "incessant and noisome editorial invective" and "foulmouthed slander" at the moment of origin for our state and city? As much as we sometimes lament the intemperate tone of current debates and partisanship, they pale in the shadow of that past invective!

So hit up that SCAN meeting tomorrow night.

Back to more pedestrian matters, the official State advisory committee for walking and biking, OBPAC, has a two-day extravaganza scheduled for Salem on the 14th and 15th.

On day 2, Thursday the 15th, they'll have a special Salem focus, including a ride of the proposed Winter-Maple Family-friendly Bikeway route.

City of Salem Staff as well as Salem Bike Boulevard Advocates will talk as well.

At some point in seeking funding, it is possible that an application would pass through the hands of OBPAC for scoring, and so in addition to having a simple informational purpose about what Salem is doing, there is something of a longer-range marketing purpose here as well. Over the years, other cities and areas have been more solicitous of OBPAC than Salem has been, and so taking the time for this focus on Salem is a bigger deal than you might think.

The Technical Advisory Committee for our Metropolitan Planning Organization also meets today, on Tuesday the 13th, and there are a few items to note.

In the minutes for the February meeting, there was an interesting comment on the MPO Taxing District concept:


Austin McGuigan expressed the opinion that it doesn’t seem like state-MPO taxing districts is a good deal for areas outside of Portland. He stated that smaller groups would be unable to compete with Portland for projects because they don’t have traffic volume and congestion issues. Locals would be taxed but have no means of leveraging those funds.

That's a little bereft of context, of course, but doesn't it look like an indirect admission that projects like the Salem River Crossing are unwarranted because we "don't have traffic volume and congestion issues" on the same scale? That seems like a sentiment it might be worth burrowing into, as it seems to support the case that the SRC is not in fact an urgent need, that if it has to compete, it can't compete.

(The minutes are from February, and there's a note about the joint Dan Burden visit and bikeway Open House, "Get Salem Moving." It just registered that the 2008 bond was titled "Keep Salem Moving." The disjunction here between a perceived need to start moving and the idea of maintaining an existing state of already moving is perhaps an unintended comment on the incoherence of our approach to mobility right now.)

In the meeting packet is a long outline prepared by the Lane County MPO of the current Transportation Bill at the Legislature, and it appears to include some new details.

One of them appears to beef up ways that projects are vetted and scored before making funding decisions. Project analysis would include


The future costs to the department to preserve and maintain the project, discounted to present value...The costs to highway users that are associated with the project, including loss of safety, delays in the time of travel and additional expenses for operating vehicles; The costs of any environmental impacts, including vehicle emissions and noise;

That could be promising.

Earmarks for our Region 2 include:


Nothing on the SRC here.

But the SRC appears prominently in the "congestion relief district" concept: 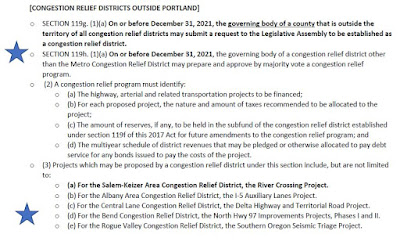 It is called out specifically:


Projects which may be proposed by a congestion relief district under this section include, but are not limited to: (a) For the Salem‐Keizer Area Congestion Relief District, the River Crossing Project...

Another new item is the Task Force on Mega Projects:


If the SRC ever gets this far, it would seem to qualify, as the current $430 million estimate is sure to be revised upwards past the $500 million threshold, and it certainly has attracted "a high level of public attention."

Those were new things I hadn't seen in other discussions of the proposed bill, so the summary was helpful.

On the agenda also is news about an online mapping project about safety. It is still in progress, and the TAC will get an update on it. When it goes live and public it could be helpful.

SKATS Technical Advisory Committee meets Today, Tuesday the 13th, at 1:30pm. SKATS is at 100 High St. SE, Suite 200, above Andaluz Kitchen and Table Five 08.
Posted by Salem Breakfast on Bikes at 9:30 AM

The meeting is accessible and open to the public. It is also accessible through a conference call line and an online program [call that bike/ped # below for the call-in or url and passcode].

Those who wish to provide comments are encouraged to sign up on the public comment sheet provided at the meeting. General guidelines: provide written summaries when possible and limit comments to three minutes. If you bring written summaries or other materials to the meeting, please provide the chairperson with a copy prior to your testimony.

Accommodations will be provided to persons with disabilities. To request an accommodation, please call ODOT’s Bicycle/Pedestrian Program office at (503) 986-3317."