Change at WSNA on the SRC Likely 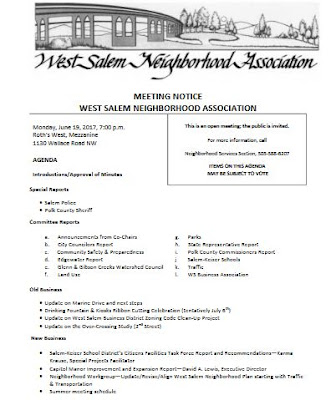 The West Salem Neighborhood Association meets on Monday night, and it looks like its meetings are going to become the most active public site of contest on the Salem River Crossing for the moment.

On the agenda for Monday are two directly related items:
Other items touch on the SRC less directly:
Approximate attendance counts probably tell a story of an important shift in the works:

At the May 15th meeting, which had an update on the lead abatement project on Patterson Street, about 32 people attended.

At the June 5th meeting which was advertised by the SRC advocacy group Salem Bridge Solutions as a call to action, nearly 80 people attended.

It certainly looks like transportation in West Salem is going to be contested loudly, maybe even bitterly, this summer and into the fall and winter.

As we saw, the group misconstrued the neighborhood association's proposal on Marine Drive. WSNA's proposal is pretty clear about building a street not a bike trail, on a more northern section of the Marine Drive alignment:

There is lots of other misunderstanding and ignorance about the SRC out there. So at the meetings, there could be an opportunity to dig into policy, dig into the SRC's process and analysis, and explain why building a giant bridge and highway is:
But that means also developing a critique of autoism, and one of the hallmarks of the debate so far, and something we definitely see at the City, is an unwillingness to go this far. At the City we have a lukewarm interest in more biking and transit, but we don't also take then next step and say, "we must drive less" and enact corresponding policy. Instead we pursue widening and expansion projects that make it easier to drive. City actions are not coherent.

If the question at WSNA is resolved principally through a new up-or-down vote, the SRC will surely win at WSNA, and it remains true that in the abstract, the idea of a new bridge is much more broadly popular than the status quo or other solutions, which are generally more complicated than "a new bridge." It seems likely that the official position of WSNA on the SRC is going to change soon. This is an instance where "the will of the people" is wrong. Popular things aren't always good things.

The West Salem Neighborhood Association meets Monday the 19th at 7:00 P.M. in Roth’s West, Mezzanine (1130 Wallace Rd NW).
Posted by Salem Breakfast on Bikes at 9:00 AM

Well, regardless of the direction of the vote by WSNA, we have seen that the City officials care nothing about resolutions passed by neighborhood associations or this enormous boondoggle would have stopped bleeding a torrent of money many moons ago.

If any pro-gas-tax-hike, pro-toll, pro-car-registration-fee-hike and pro-property-tax-hike council members dare to cite a new WSNA opinion in favor of the 3rd bridge as a reason to hike all those taxes, then we can have a discussion about why only overwhelmingly white and affluent neighborhood associations opinions' matter.

On one level I wish that Neighborhood Association's opinions mattered. But after being involved for 30 years, I know that they only matter if they are in agreement with what the majority of Council wants. In the current case the Council is not going to change their minds because at one or two meetings people come out to overwhelm a vote.

The issue deserves a good discussion in the counties and cities that would bear the burden of the bridge. That has not happened and I am not sure it will happen.

Emotion is ruling the current bridge proponents and not facts or logic.

I presume that before this is all over rational thinking will come forward. That is to say, when you wish for something that is all it is, wishing. What is needed is the ability to pay and that has not been identified yet.

Anyone who has been caught in traffic on Lancaster Drive or Kuebler or South Commercial is not going to want to pay for a West Salem "problem."

Can you imagine how the citizens of Woodburn would vote on a higher tax to help West Salem commuters?

There is a quote I like, "sound and fury, signifying nothing." It fits here.

I wish that these advocates would move on to discussing and supporting realistic solutions like in the Bridgehead Study. Work on more alternatives to single car- single passenger trips.

Earlier this week at the Monday annual meeting, West Salemites elected a new slate of pro-3B officers for WSNA. Since that wave was based on single-issue advocacy, it will be interesting to see how they handle non-bridge neighborhood matters, also.