What do you suppose the Golden Pioneer thinks of the new flashing beacons alongside the crosswalk on Court Street at the Capitol Mall? 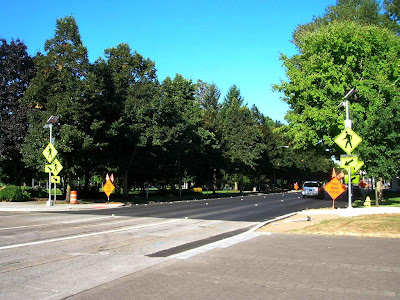 A couple of weeks ago in a comment Stephanie pointed them out and asked about their effectiveness.

The crosswalk itself isn't striped yet, so the crossing isn't complete and the full suite of visual signals to drivers isn't either.

But in the bright morning sun after Breakfast on Bikes on Friday, it was not difficult to see some questions. 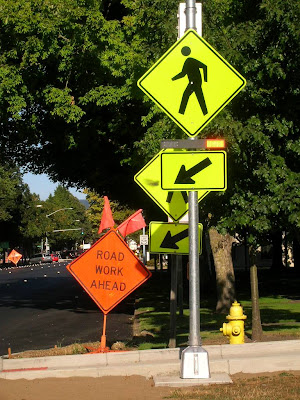 Maybe it's the angle of the photos here, but it sure seems like between the contrast and a bit of sign clutter, the beacons don't necessarily stand out as important visual data. The contrast is interesting, and a function of light levels and the green foliage. But the signs really don't stand out from a distance. In the fall and winter, when there's less green on the trees and the sun is at a different angle, things may be different. But the signs just didn't pop with "pay attention!" until you got closer - after stopping distance.

In low light the flashers will pop of course, and they will be especially useful. I imagine when the Legislature is in session, folks will eat them up! The other thing will be remedied easily by training and habit, but the button on the north side (for a crossing going south) is on the left, and people didn't see it, even though they had to look left for the oncoming traffic. The button on the south side (pictured here) is on the right, and finding it seemed more natural for people accustomed to the "right hand rule."

Stephanie's question, I think, was whether the flashing beacon would raise the bar for asserting the right of way. Most of us, I think, have a lot of difficulty when we are walking at unmarked crosswalks. People in cars persistently ignore our right of way. Even at marked crosswalks it is difficult. In June, over 50 people in cars were cited for failing to yield to a person on foot at marked crosswalks on 17th! So does the beacon now create an expectation that drivers should yield only where there's a flashing light? That is, does it help here but hurt elsewhere?

An FHWA study from Florida was making the rounds recently, but it doesn't answer this question.  And I'm not sure what I think.

I would like to see more flashing beacons near schools, and at tricky crossings like at Union and Commercial.  I hope the City will consider using them more often, as they do substantially improve yielding rates.

But it's true, they might generally increase sign clutter and noise, and diminish drivers' propensity to yield at unmarked or otherwise "lesser" crossings.

So what do you think?
Posted by Salem Breakfast on Bikes at 10:00 AM