Places for Bikes (formerly People for Bikes) just rolled out their Bike Network Analysis, and even the Platinum don't always do very well!

This is something of a competing rating for the League of American Bicyclists Bicycle-Friendly Community assessment. As I understand it, a major industry funder of advocacy, Trek Bicycles, pulled funding from the LAB and instead allocated it to Places for Bikes. So there are industry politics in play here also. Finally, obviously it is a work in progress, a first iteration, and will certainly grow and be modified. There will be useful criticisms of it and refinements for it.

Still, the analysis is very interesting. And as it competes with, or is complementary to, the LAB's rating, it could shed light on important new factors in making for inviting and comfortable city bicycling.

Here's a brief note on method:


The Bike Network Analysis (BNA) score is an evolving project to measure how well bike networks connect people with the places they want to go. Because most people are interested in biking only when it's a low-stress option, our maps recognize only low-stress biking connections. 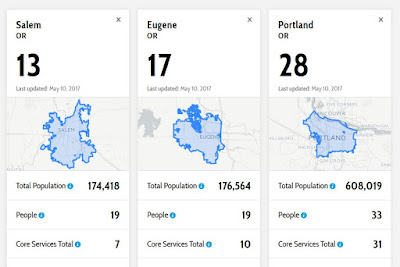 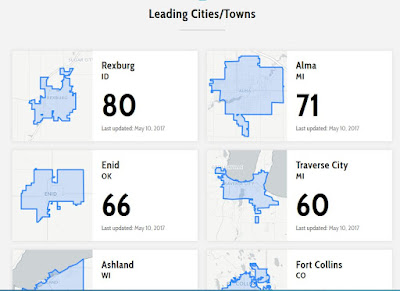 Of the leading cities, Fort Collins is the only city I recognize as having been considered very bikey. Mostly these appear to be small towns with little traffic rather than cities with extensive bike boulevard networks. That is to say, they are quiet in absolute terms, not excellent for biking despite ordinary levels of traffic. The analysis might not be capturing quite the right characteristics just yet.

Cities like Davis, California and Corvallis are also not listed, so that's an important limit as well.

These should probably be regarded as draft findings and we should expect significant revision in the next iteration.

But it is true that Salem's network is still bike lanes on busy arterials, and our land use is diffuse and spreads destinations out, remote from each other. By these measures, Salem is poorly positioned for increases in cycling.

Of course this should not be news. You may recall the Sustainable Cities Initiative project "Accurately Modeling Salem’s Bike Network in ArcGIS" from back in 2011. It showed clearly the dearth of low-stress routes in Salem. Since then we've added a few more, but not on any meaningful scale and with full network effects. They are disconnected, garnishes on the main serving of autoism.

So this assessment will be something to watch as it develops and as Salem builds out its network.
Posted by Salem Breakfast on Bikes at 12:01 PM

Email ThisBlogThis!Share to TwitterShare to FacebookShare to Pinterest
Labels: Rankings

I don't really put much stock in this. Neighborhood streets connect most places in the central part of Salem and are very low stress to ride on. And if you know the streets you can make it very far south, north and east on low stress roads, looking at a map will help with this, I'm not as familiar with west Salem. Just because a street doesn't have a sharrow(which I think are useless) or a bike lane doesn't mean it isn't part of the biking network.

It's not like what you say is completely wrong, but you may be underestimating the significance of these problematic factors:

1) the core of downtown proper, with many destinations for employment and errands, is a black hole with lots of traffic and busy streets
2) the neighborhood streets you referenced are intersected often by very busy streets, which for many are effective barriers and constitute gaps in the network. (For example, a favorite route is to work north-south along a 21st Street alignment between Mill St SE and Madison NE. At Market, Center, and State you have to make a jog in addition to the crossing, and these can be stressful. These should not be underestimated as barriers.)
3) the assessment is for the whole of a city, not just choice sections of it. this is one reason why Eugene does not score highly; outside its streetcar grid, it has areas much more difficult for biking
4) the outer areas of Salem lack the concentration of destinations easy to reach - walkscore is a helpful proxy in this regard

If you zoom in on the Salem detail map, you'll see they accounted for the streetcar grid as mostly "low stress," but look at the red lines intersecting it.

At the same time, again, this is a provisional draft assessment, and you may be right that Salem's streetcar grid should be weighted more highly and raise Salem's total score.

Definitely this first scoring is not a "final answer" and it will be interesting to see new iterations and refinements.