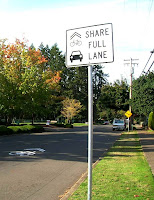 2010 was definitely the year of the sharrow, don't you think? What else directly impacted bicycling in Salem as much?

Still, wrapping up the top stories from 2009, I was hopeful that 2010 would be bigger and better for bikes and greater transportation options. Momentum seemed to point beyond a baseline of a pilot program for sharrows. So 2010 was a little disappointing in some ways - no doubt in part a casualty of the Great Recession.

Sharrows on Commercial, Chemeketa and Rosemount and represented a real improvement in visibility and accomodation.

The Union St. Railroad Bridge reopened after lead abatement, and the number of people who enjoyed using it continued to climb. And West Salem City Councilor Dan Clem sponsored Bridge to Work Day to celebrate the opening - here and here

In several places around town, the Keep Salem Moving $100M bond measure funded road resurfacing and reconstruction. Here the bike lane on South Commercial is ready for the final layer of asphalt. Construction of new bike lanes - always in the context of road widening - will happen in later projects mostly.

(But the bond's a mixed bag for sure, and some projects will create a host of new barriers and problems, like the widening at Glen Creek and Wallace.)

Public Works also rolled out a railroad quiet zone project list. One of the treatments will add a bike-only light to Chemeketa at 12th Street.

The best parts of the year were the DIY moments. And four stood out.

For an amazing and terrific year of Kidical Mass rides, Kat is my bike hero for the year. It was great to see the Statesman recognize her, too. 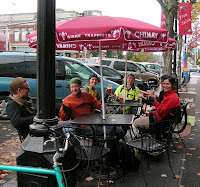 Cory started a new tradition with the Cranksgiving alleycat - great fun and a way to collect donations for Food Share.

The Transportation and Growth Management Grants kicked in and the City kicked off the bike plan update.

Racing was in the news with the OBRA Cross Championships at West Salem High School and Salem resident and OBRA Executive Director Kenji won election to the BTA Board. He also wrote some winning public advocacy. 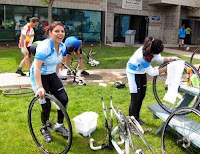 The Boys and Girls Club started the Flow Riders youth development riding team. Technically it started in very late fall 2009, but their coming out ride was the Monster Cookie!

Doug resigned from the BTA board in part over frustration that it remained such a Portland-focused entity. (Portland reaction here.)

The gift from Sanyo Solar of an Eneloop battery-assist bicycle seemed to languish. Instead Portland grabbed the glory as OMSI built the first charging station.

The Rivercrossing Alternative Modes Study was completed, but its sensible recommendations weren't taken up with much vigor. It provided the roadmap for the sharrows, but didn't spur any "big thinking." Hopefully the bike plan update will provide that. (see below for more)

I look forward to seeing more of the ideas and analyses generated by the Sustainable Cities Initiative.

A new non-profit is incorporating to work on the vision of a large loop trail in West Salem and Polk County along the river and through wine country. This is big thinking! Look for more in January and February.

The Rivercrossing Draft Environment Impact Statement on the proposed Highway Bridge will come out. If built, this half-billion dollar project would be the largest infrastructure project in a generation and shape the city in fundamental ways. Look for more this winter.

So what were your big bike stories for 2010? What's missing here? (How about BRMBA, the Bike Shops, Club Riding...what about your corner of the Salem area bike world?)
Posted by Salem Breakfast on Bikes at 11:00 AM

Email ThisBlogThis!Share to TwitterShare to FacebookShare to Pinterest
Labels: Advocacy, Barriers and Bottlenecks, Other Bike Fun, Salem Government and Policy, Year in Review