Library Displays for Walking and Biking Show Problems and Solutions 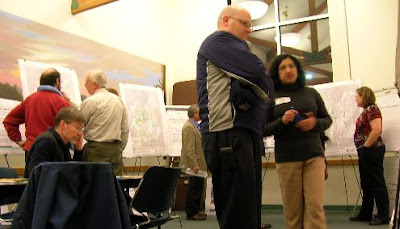 Last night's open house at the West Salem Library for the biking and walking plans was terrific. Dan's got a report on the one at the 50+ Center.

There are two more! So don't miss out. One of the posters is a list of "hot spots." Not surprisingly, Lancaster's at the top of the list. 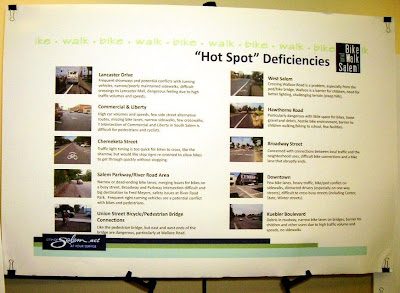 One of the spots not listed was just outside the West Salem Library. The intersection of Wallace and Glen Creek is scheduled for a $12M widening project, which will add several lanes to the cross-section, making an expressway-level interchange.

This will lengthen crossings for people who walk and bike, and generally deteriorate safety for people them. The widening will further separate the library, the transit center, Roth's, and the Union Street Railroad Bridge from the neighborhood just across Wallace, making trips even more car-dependent. And it so happens that the intersection had the highest number of reported crashes with bicycles between 2005 and 2009.

This is moving in entirely the wrong direction.

Moving in the right direction, however, is a set of new Sustainable City displays at the Main Library. If you go for the meeting tonight, don't forget to check this display as well! 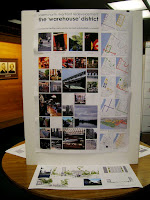 The set of Civic Center boards has been swapped out, and now the area near the heritage center is showing North Waterfront projects. (Click on boards to enlarge.)

The projects fly at a pretty conceptual level, so they aren't always very full of details you might want to latch onto. Moreover, this set is principally concerned with building rather than transportation, so the schemes haven't given great thought to transportation within the development, and even less to how Salem's existing transportation systems might connect with and flow through the development. 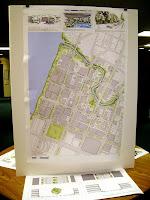 Still, one of them caught my eye for its treatment of Union Street and non-motorized transportation.

At the bottom left you can see the on-ramp arcs of the Marion Street bridge and just above them the Union Street Bridge. Front street is restored to a grid and the by-pass is gone. 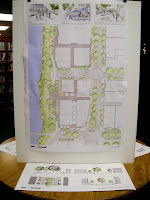 In this detail of Union and Front you can see median strips with trees and what looks like a generally pleasant walking environment, with good connections to the bridge and to the new district.

This is a vision of a very civilized downtown!

There's lots of ideas floating around right now. Lots of opportunity to gather support and to make something happen. At the same time, without support, the ideas may remain just pleasant cocktail conversation. Email your City Councilor and let them know you support better walking and biking in Salem!
Posted by Salem Breakfast on Bikes at 12:15 PM

The widening project you mention at Wallace and Glen Creek is troubling (to say the least). It represents a regression in my opinion, and adds to the already tough problems West Salem faces for making active transportation viable there.

It represents exactly what we DON'T need. Another "Salem Parkway" like barrier to transportation and connectivity. West Salem already has substantial problems with east-west connectivity (and Wallace Road is already a huge part of the problem). Making it wider and adding more car dependency there only makes things worse, and complicates finding a true solution to the West Salem traffic snarl.

I am starting to get the sense there is very little effective communication between the various City of Salem departments. I was just at a W Salem Business Association meeting yesterday where a City Planner discussed some bike/ped hard surface improvements at Wallace Marine to specifically increase the connectivity from Wallace/Glen Creek to the park and the Union Bridge. If they can funnel bike/ped traffic to the park AND make changes on the East end of the bridge it just might work.

The other issue/project, that I must admit I don't entirely understand, is the improvements to 2nd street and these improvements help active transportation/connectivity. Somewhat surprisingly, however, the business group was interested in trees over parking stalls.

On an somewhat unrelated note...Eric - Have you chatted with David Fox from Fox Blueprint. He has some really forward thinking ideas for a more walkable/bikeable downtown!

David Fox is on the Planning Commission and on the Bike Plan Update "Stakeholder Advisory Committee"!