The Union St. Railroad Bridge was funded in part with about $2M in Transportation Enhancement monies. The program completes funding gaps for valuable projects.

Just before Christmas, ODOT announced the long-list of projects being considered for the latest round of Transportation Enhancement funds. The Salem-Keizer area has seven candidate projects.

[update: the policy committee changed priorities, so this list is pretty much totally wrong. See the first comment for the correct priority order. I'll probably write a new post in the next few days.]


Fortunately, the trickiest one is also the one with the highest recommendation from SKATS, our regional Metropolitan Planning Organization.

Improving the railroad crossing on Hines St. SE, between 13th and 14th would just be a standard project of sidewalks and bike lanes. But because of the Union Pacific switching yard just to the south, the switch just to the north will need to be relocated out of the way. That takes special sauce.

The project is also part of a cluster of "quiet zone" improvements. 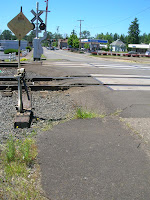 Here is a view from the southeast looking west. There is no sidewalk here, and people on foot or on bike have to navigate ankle-twisting gravel or merge well into the roadway. 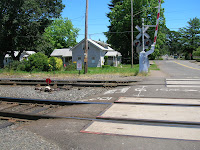 Here is a view from the northwest looking east. There's a little more room, but that pesky rail switch (in red, low to ground) will need to be relocated in order to construct a sidewalk, and that becomes a spendy project for a small stretch of sidewalk.

The other six projects (first two tied for second priority, projects linked to pdf applications) are:

The full statewide list is now out. (Pdfs of all the applications can be downloaded here.) Here's a survey that will be used for public comment. Comment will be taken through January 28th.

For comparison here's more more on the Portland area applications. Early in December I discussed the Salem-area projects in more detail and explained why I did not think they were a strong list.

In any event, Hines is the project to get behind! So "vote early and often," as they say...and hopefully the Salem area will continue to get some of these funds.
Posted by Salem Breakfast on Bikes at 12:01 PM