City to get Grant for NoBro Parking Study

Back in the late 90s, the City trumpeted the North Downtown District as undergoing "revitalization."

It took a while, but a significant chapter in that larger project has been completed. Three sites on Broadway at or near Market street have been sold and redeveloped. Between Salem Cinema, the Broadway Coffeeshop and Commons building, and other businesses, the district is beginning to hop!

With these three large parcels being developed, one of the problems is traffic and the encroachment of parking onto neighborhoods that were developed without attached garages and whose residents depend on on-street parking.

Earlier this year the City applied for two Transportation and Growth Management grants. The Edgewater one was not awarded, but the City did win a grant for the North Downtown study.

TGM grants take a while, and there's a bit of a dance between the State and the grantee as they decide exactly what the scope of the project and deliverables will be. So it may be some time before we learn what exactly the study will entail. 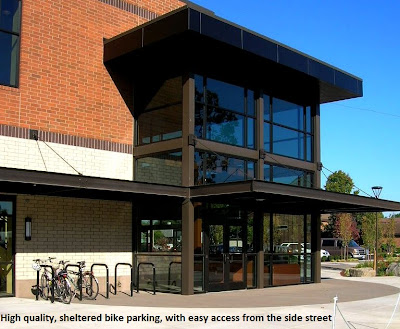 The Broadway Commons building has some of the best bike parking in Salem. It is also easily accessed from the side street.

This, and not a parking garage, or expanses of surface parking lots, should be central image of the study. Making it easy and comfortable for people to feel like they have a broad range of choices, a robust toolbox of transportation tools, should be the goal. Sometimes you need a pickup to access the storage unit across from Boon's, other times you just want to walk for a cup of coffee.

Choice, it's all about having a real menu of choices.

The North Downtown Plan from 1997 is interesting, if wonky, reading.

The section on transportation and parking is limited. Though it moves in the direction of a walkable streetscape, it mostly takes for granted that people will be driving cars, with other travel choices an afterthought. Its priority is more cars, not making it easier for people to feel they have a choice:

Based on current growth projections, traffic volumes on several major arterials approaching the stucy area are expected to increase by 20-40 percent over the next twenty years. [projects to accomodate this increase] may conflict with bicycle and pedestrian activity along the corridor.

The page on grocery stores shows just how dramatically things have changed in 15 years:

[T]here is a small but emerging trend of smaller grocery stores coming back into inner-city locations. Zupan's, a Vancouver, Washington specialty grocer, is developing stores in the 12,000 to 20,000 square foot range in selected inner-city neighborhoods. Nature's, an environmentlly supportive "green grocer" has similar grocery outlets around the Portland metropolitan area approximately the same size as the stores being developed by Zupan's.

Nature's has become part of Whole Foods, and several of the original Nature's team created New Seasons. This summer Salem will get its first Trader Joe's store.

Grocery Outlet is also in the neighborhood. It's important that the area not totally gentrify, and a good move would be to make it easier to walk and bike to Grocery Outlet.
Posted by Salem Breakfast on Bikes at 12:45 PM