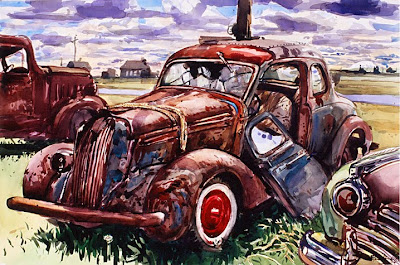 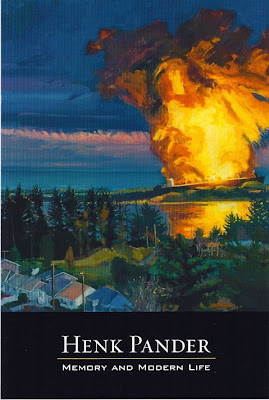 The talk and its amplification was, alas, a bit muffled, but the slides were clear: The juxtaposition of Dutch old masters with modern Panders was fascinating. Pander is Dutch, and the tradition of landscape, still life, and contemporary life seemed wired in his painterly DNA.

One of the things that Hull discussed a little, and which naturally was interesting here, was Pander's take on transportation.

Hull talked a good bit about Pander's fascination with ruins and with the car as a symbol of American mobility and consumerism. One of the paintings in the show is an epic canvas of a rusted out 1940s Buick, crashed and ruined. (I couldn't find an image of that painting, but the watercolor at top may well be from the same series.)

Pander also painted a ruined freighter many times. The postcard for the show shows the New Carissa in flames at night. 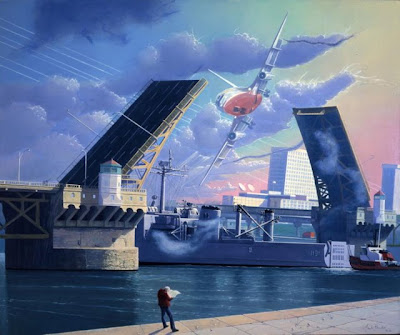 This plane, painted during the Reagan era, appears to crash in between the spans of the Burnside Bridge in Portland. After 9/11 Pander painted Ground Zero several times.

Here he paints the Utah hanger for the moth-balled Enola Gay. He also painted other moth-balled passenger jets. 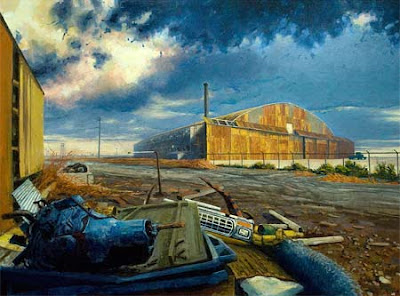 I left with the impression from the show that mobility is enormously problematic for Pander, that in war and in peace it seemed to exact great costs with few returns.

Two forms of transportation were notably missing, however, and Hull did not mention these. Pander painted cars, planes, and ships - but no trains or bikes. I'm not sure how interesting the omission of trains is. But the omission of bikes is quite a lacuna. He's Dutch! He lives in Portland! How can he not paint bikes and show bike transportation?! Hull even showed an Amsterdam street scene full of people on bikes - but no bikes in Pander's canvases, not at least the ones in the show. 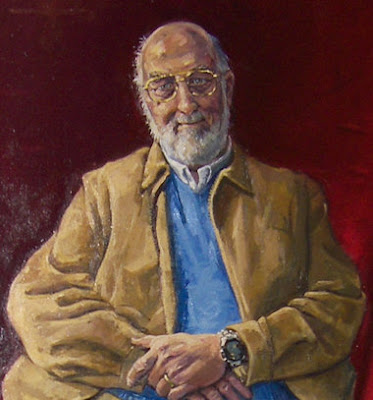 (This is a quickie, and Laura Russo and Bonnie Hull have most of the images and information. The show will repay visits, and perhaps with more time and research, something more interesting will emerge about Pander's take on transportation and mobility. He didn't learn to drive a car until he was in his mid-30s, Hull noted.)
Posted by Salem Breakfast on Bikes at 12:30 AM