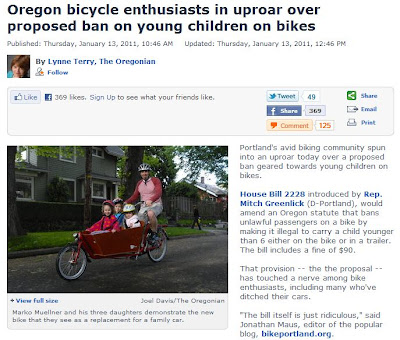 Wow. The intertubes done blowed up over babies on bikes.

Just a huge furor over HB 2228, which would ban kids under six on bikes or in trailers. It also made the Metro section of the Oregonian today.

It's great to see people who bike fired up, but it's possible we're getting fired up over the wrong things, sweating small details and losing sight of the big picture and our strategy. I'm not sure it was necessary to escalate to DEFCON 2 so rapidly.

Part of the problem is that we advocates haven't done a good job of assessing the bills and analyzing them. We comment on the ones easy to parse and understand, like a ban on babies, and ignore the complicated ones, like how we fund school buses.

I know I missed the fact that this was only a three-day organizational session, a prelude to the main session, which will start when the Legislature reconvenes on February first. It might have been better to hold off listing the bills until as advocates we had a better sense for which were viable and which were not. The ban was was almost certainly going to die in committee.

It's not difficult for me to imagine that the energy in this furor - the DEFCON 2 factor - might have been better spent supporting a ban on studded tires or recalibrating the way school busing is organized and funded. Or working on a bill that hasn't even been written yet!

If you have to pick your battles, have we in fact picked the wisest one? Shouldn't have we stayed at DEFCON 4 for a while?

With the change in Salem City government, maybe the most effective thing people can do - act locally, you know! - is to make a commitment to letting your City Councilor and Mayor know once a month how important are bicycling, active transport, and mobility choice. Just once a month. Let your local electeds know how important this is.

Of the bills filed presession (remember, there will be more bills introduced!), there are at least four others that may be much more important and whose debate and possible passage will likely affect bicycling in general much more than a ban on babies transported by bike.

House Joint Resolution 5 is a proposed

This is important because gas taxes can be used only on road expansion - on things that increase pollution and congestion! The amendment could help fund solutions instead of exacerbating the problem.

Senate Bill 266 would legalize electronic tolling. This could make it possible to toll the Center and Marion street bridges, reducing congestion and pollution and helping to fund important transportation projects. It would also make trips other than drive-alone trips, like bike trips, more attractive.

House Bill 2437 would revises method of calculating transportation grant from State School Fund distributions. A debate on this and changes to the way school busing is funded could help improve active transportation and safe routes to schools.

The fourth is House Bill 2333, which would ban studded tires, which yearly cause about $40 million in damage to Oregon roads. ODOT, the agency responsible for state roadways, does not use studded tires on the state fleet, using chains instead. They recommend citizens also use chains, not studded tires. That's $40 million in annual savings to reallocate in other ways!

Between now and the first of February, legislative advocates will read the bills and analyze them, and we'll get some more informed opinions and discussion. We'll also have a better idea for the bills likely to move forward and those likely to die in committee. We need to be more patient so we can have a considered response.

So..back to HB 2228. Things have moved too quicky to stay on top of them all - being current means focusing on too many small details and losing the big picture. Still, here are a few highlights:

Mia Birk of Alta Planning also added her thoughts and asked Greenlick to pull the bill.

In the end, I can't knock the feeling we've made a mountain out of a mole hill! And possibly spent scarce political capital.
Posted by Salem Breakfast on Bikes at 12:01 PM

One does not spend political capital, one invests it, either in productive or nonproductive ways. It remains to be seen which this is.

It's nice to imagine a world where Dem lawmakers don't drop stupid bills as a way to start a conversation, but that's not our world. I suspect that while the response is kind of a tempest in a teapot, the net gain is positive. Imagine if bicyclists had NOT been able to muster a lot of outrage -- given the stupidity of the bill, a quiet response might well have been painting ourselves as too sick and lame to respect.

Shorter: my dog goes berserk over tiny little invasions by squirrels that are themselves meaningless little infringements. But if he doesn't, then its a squirrel party all day and night.

Even shorter: sometimes posturing is a useful communications method.