Why is Lancaster so Effed up? The Patchwork and Mobility Choice

When the mapping project closed, there were still almost no pins in west Salem and very few in east Salem. Between the two areas are important differences in both geography and demographics. So it is difficult to make generalizations that are accurate to both.

One important difference is that while the bike plan update can theoretically specify solutions for west Salem, it may be largely powerless between I-5 and Cordon Road - though the project is both a City of Salem update and a Salem-Keizer School District Safe Routes plan, and it will be interesting to see how they fit together. 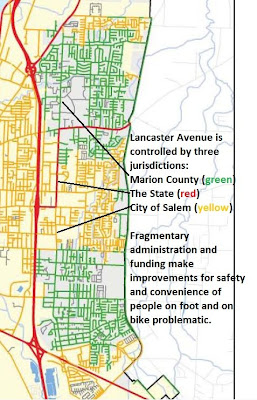 Most of us probably don't give sufficient attention is the fact that there are vast swaths of unincorporated county land that superficially appear to be "inside Salem." This is non-trivial technical detail!

The problem is most acute on Lancaster*, where there are not just two, but three jurisdictions responsible for the road.

No wonder Lancaster is so awful! It's Cerebrus, the three-headed monster!

Bad metaphors aside, the Transportation System Plan for Salem looks atomically at individual roads. You can see how Salem roads are in yellow and county roads are in green. But of course to go anywhere meaningful requires travel across a set of multiple roads - travel is not atomic in this way! It happens as a whole gesture and movement, not as herky-jerky, chopped up bits.

Even with improvements in east Salem, the problem of "disappearing bike lanes" and incomplete bike routes will remain because of the jurisdictional patchwork.

This is also a problem for schools.

One of the Transportation Enhancement grant project applications is for funding to build sidewalks and bike lanes on Hayesville Drive in unincorporated Marion County.

But so far it has stayed out of the City of Salem, even though three of the schools are gerrymandered into the city limits.

Rehearsing the history that led to this would be difficult - and maybe tiresome. But it is clear that having such fragmented city limits and such an expanse of unincorporated land that is developed and clearly part of "a city," and certainly informally is part of Salem, exacerbates transportation problems and diminishes mobility choice.

And unfortunately, it may be that this update process is hobbled from the start in the outer east portions of town.

*Drive of course, not Avenue...sorry!
Posted by Salem Breakfast on Bikes at 12:01 PM

Lancaster is one of the worst streets in Sale. I cringe when I see cyclists on it because I think it is dangerous road for them. There are too many driveways meaning it gives drivers more changes to pull out a hit a cyclist.

Part of me says bulldoze the entire strip and build it correctly.

That is a pretty apt post title, I say the same thing a few times a week.

To me the biggest daily reminder of the 'patchwork' situation is the lack of continuous sidewalks and adequate lighting along Center St east of Lancaster. The high-density housing units in the area create high pedestrian traffic. Currently the road is more of an unimproved two-lane road with wide shoulder than a major suburban street. Cyclists, pedestrians and garbage/recycling bins are forced to share the space which is only compounded during dusk/night hours with little light. A frustrating situation for a street that is so obviously a 'part of the city.'

I will try to dig up a cite but during the last election cycle there was a claim that annexing certain high-density areas actually costs the city more money in services than it would make in increased tax income. This probably speaks to the difficult history that led to the current situation.

A bulldozer for Melina, stat!

The annexation questions and history are complicated, and I don't understand them. I'll be interested in the claim about the cost to deliver services, if you can find it!

I completely agree with D.Davis about the lack of pedestrian friendly sidewalks on Center St between Lancaster and Cordon Rd. On my commute to work (Fruitland School) I frequently see moms pushing strollers and adults in motorized wheelchairs using the "bike lane" because there is no other option. Not to mention large groups of children 15-20 waiting on the edge of the road for the school bus in the morning. These families would be well served with a continuous sidewalk.