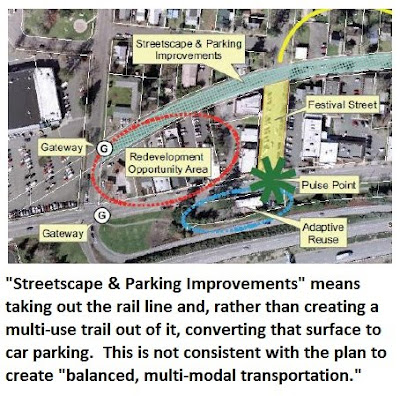 The appetite for car parking too often gobbles up live space, whether public or private, building sites or streetscape. It's like an automaton - a zombie appetite that just won't stop.

But it doesn't have to be this way. If cars themselves are useful transportation tools, they should also be part of a toolbox or a menu of mobility choices. Unfortunately, most people don't feel they have a range of choices.

Without being at all explicitly about it, our commitment to car monoculture and parking is all over Monday's Council agenda.

But first a note about a retirement. Director of Urban Development Rick Scott retired on Friday, and his group was responsible for the Union Street Railroad Bridge project. Thanks, Rick, and happy retirement!

An interesting note about changing the procurement process for the downtown Economic Improvement District. Currently Go Downtown Salem administers the EID. Their contract is up for renewal and it is being opened to competitive bids. City staff feel that the "request for proposal" process will be inadequate and recommend changing to a "special procurement process."

I really have no idea what the change in process would mean, but since downtown connectivity and mobility choice is critical to bicycling in Salem, the EID renewal process is worth paying attention to.

Western Oregon University was interested in having a small campus in the development, and with Chemeketa's CCBI kitty-corner that would create a neat cluster of higher education along the Union Street corridor. The density fits with the opportunity to continue to reshape Union Street as a bicycle boulevard; but also threatens to revert to more of the same auto-oriented development. In any event, as you might expect, the economy has stalled the development. The development team is the same one behind the Rivers condos, and the city's packet contains an interesting letter from them.

The DEQ is requiring additional environmental remediation on Minto-Brown Island, and the easement on Minto-Brown for the Riverfront-Minto bridge needs to be modified slightly.

The status report and update to the December 2009, Council Goals, is the most interesting part of the agenda. Now that the Sustainable Cities Initiative is going, it is clear that many of the projects the students are undertaking dovetail with the goals and interests Council identified.

It's amazing how many of the goals actually relate to car parking. It's sad how much land and how many resources we apply inefficiently to the subsidy of storing cars between trips.

It was also disappointing to learn that the Salem, Falls City & Western railroad right-of-way on Second Avenue in West Salem is going to be used for car parking rather than as a mini rails-to-trails type project for active transportation. Second Avenue could be a great alternative to the narrow bike lanes in the door zone on Edgewater, and the desolate multiuse path sandwiched in behind the buildings and the Highway 22 berm. 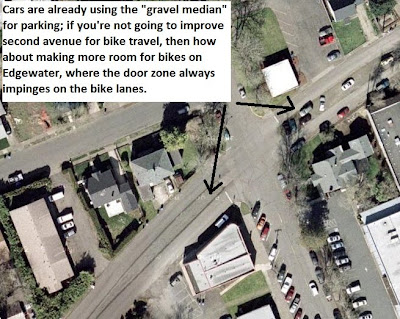 If Second Avenue is going to get a bunch of car parking, then what about taking out parking on one side of Edgewater and restriping so there's a generous bike lane and maybe room for bike corrals?

Connectivity to the Union Street Railroad Bridge is on the radar, but it is not necessarily envisioned through Marion Park and not along a Union Street Bike Boulevard. Still, there's significant progress. If you read this blog, you know all about this!

Finally, a note that relates to thoughts last week about Lancaster.

I don't know that I'll follow this closely, but it's become clear that annexation issues have a significant impact on active transportation and mobility choice, especially in unincorporated areas east of Salem.
Posted by Salem Breakfast on Bikes at 8:30 AM

Re: parking. What's your hunch, Eric? Are downtown businesses requesting more parking? I find it difficult to believe that businesses still don't see the benefit in ensuring a variety of transportation options to their doorstep. Are Salem active transportation voices just not heard enough (or at all) by our local reps? It seems to me we have plenty of space for parking. In my opinion, Salem does not use what they have very efficiently.