Bike & Walk Salem, the process to update the walking and biking chapters of the Transportation System Plan, is making progress!

At the meeting the consultants expect to report on the existing conditions and needs assessment. The consultants made several first-hand visits to see conditions on the ground and to suppliment the survey and mapping data. In mid-December Rory from Alta said he'd "logged almost 200 miles so far on Salem streets this summer and fall."

Several open houses will follow the SAC meeting the next week. Tentative locations include the Senior Center (AKA "Center 50+"), the West Salem Library, and a couple of others.

The online survey and map project have closed. The survey yielded over 700 responses, and the map appears to have gained about 160 pushpins and comments.

Interestingly, at the beginning of January, when the map project closed, there were still very few comments and pins in West Salem. 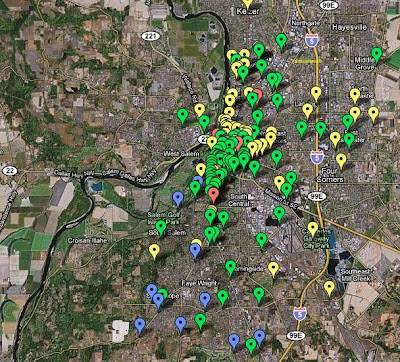 It may be that getting people interested in bicycling in West Salem is more difficult than in other areas of Salem. Because of the bridge crossings, creating a robust set of transportational choices that makes it easy for people to choose not to take a drive-alone trip, is terribly important for the city and region. The paucity of pushpins suggests there might be stronger than usual inertia behind the drive-alone trip.

It will be very interesting to learn more about the consultant's analysis of the survey and mapping.

The project team plans to accelerate in the winter and spring, with monthly stakeholder committee meetings.
Posted by Salem Breakfast on Bikes at 7:00 AM

This looks promising. I am glad the Alta consultant was down here so much getting a feel for what was going on. It will be interesting to see what they have to say. Thanks for covering this. You are all over it - as usual.

Here are the meeting dates and sites: