The Alice Awards are the highest honor given by the Bicycle Transportation Alliance at their annual dinner each year. This year there are four area advocates nominated for Alice Awards. 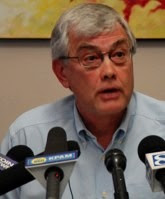 Doug is committed to improving bicycling statewide and locally in the Keizer-Salem area, playing a role in several bike organizations including the Salem Bicycle Club, the Mid-Willamette Valley chapter of the BTA, and, until last year, Doug was the longest-serving member on the BTA board of directors. Doug Parrow is a 13-year veteran of the BTA board. For many years he guided the BTA's legislative efforts, stepping up to volunteer his time almost daily during the 2009 legislative session. Doug helped push bike-friendly legislation and worked to educate individual legislators about realities and misperceptions of bicycling. His work includes: Vulnerable Roadway User law; Vehicular Homicide bill; analysis and position paper to explain how Oregon roads are funded and combat the argument that bicyclist don't pay their fair share of road costs; in 2007, Doug retooled the Oregon Vehicle Code’s Careless Driving provision to include enhanced noncriminal penalties, including community service and suspension of driving privileges, that were probably substantially more serious than what would otherwise apply to a misdemeanor or other lesser crime.

Kenji is the executive director for Oregon Bicycle Racing Association. Under his direction the past four years, Kenji has increased the participation in competitive cycling, while also bridging the gap between competitive cyclists and commuters and advocates, recognizing we are all stronger working together as cyclists. Often cycling groups become separated, but together we can achieve more and Kenji recognizes this. He reaches out to groups like the BTA, USA cycling and regional politicians to advocate for all cyclists, not just racers. We are all lucky to have Kenji in our community. 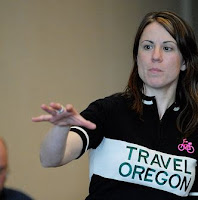 Kristin has been a tireless champion for developing and promoting cycling travel and tourism within the state of Oregon. Her leadership has taken the Oregon Bicycle Tourism Partnership from an informal committee to a committed group creating change and action within the Oregon cycling community. She has also been the driving force behind the creation and promotion of Ride Oregon Ride, the online destination and resource for all cycling-related travel information in Oregon. Her tireless efforts during the past two years have truly been a boon to the state. Finally, her efforts have helped show that cycling-related travel is not only an avenue to greater advocacy, but is also an economic driver, especially for rural communities that are looking to transition their economies to recreational-based ones.

Tim Sinatra, the Executive Director of the Boys and Girls Club of Salem, gained the support of the local community and developed the youth cycling team, the FLOWRIDERS. Tim received donations from local bike shops, race teams and businesses to provide full equipment and gear for nine at risk teens to have everything they need to ride the road as a team. The teens give their time, attitude and maintain at least a 2.5 grade point average, which many did not have prior to the team. I personally have seen their self-esteem increase and their grades improve. It has been great to see the teens grow, not only in cycling ability and strength, but in awareness of the power of their choices in life.

Awesome! I love to see the Mid-Valley so well-represented by amazing advocates. Although, on the Alice Awards page, it has Kenji listed under Portland.

OBRA has mostly a Portland constituency and perhaps some don't know he lives in sleepy ol' Salem, do you suppose!?