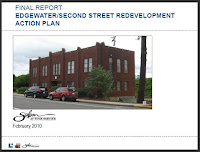 Almost a year ago, the City released its final report on the Edgewater/Second Street Redevelopment Action Plan. It stressed walking and biking.

Shortly thereafter the City applied for a TGM grant to fund parking studies of the Edgewater and Broadway districts.

The City did not get a TGM grant, unfortunately. In the current round, announced last summer, Cherriots received one to fund a new Salem Area Mass Transit District Transportation System Plan.

The show must go on, and today the City announced that

The purpose of the study is to evaluate the existing zoning, parking and development design handbook requirements in the Edgewater-Wallace Road Overlay Zone to remove barriers to redevelopment along Edgewater/2nd Street NW, while maintaining the intent of the overlay. The purpose of the Edgewater Street and Wallace Road Overlay Zone is to promote a mixture of activities, including retail, commercial, and residential development within close proximity to one another in order to facilitate walking and produce less reliance on the automobile.

Another expected outcome of the study is a parking management plan that assesses the parking supply and demand, evaluates alternative management implementation strategies and encourages more efficient use of existing and future parking resources in the West Salem Edgewater/2nd Street commercial district.

The project was identified in the Edgewater-Second Street Redevelopment Action Plan, adopted in April 2010, to guide spending investments in the 450 acre West Salem Urban Renewal Area. The Action Plan recommends a series of projects to be completed over the next three to five years on Edgewater and Second Streets, between Rosemont and Patterson Streets, that support creation of a mixed use, commercial district, new housing, enhancement of bicycle and pedestrian amenities, enhance the area's historic character, and generate private investment.

A Citizen Advisory Committee (CAC) will advise staff and the consultant, Otak, throughout the duration of the Study. The first meeting of the CAC is Tuesday, January 18, 2011, from 9:00 a.m. to 10:30 a.m. at Annette's Restaurant located at 1311 Edgewater Street NW.

The City's web page is empty for the moment, but hopefully the link will be populated soon.

Note the emphasis (bold added) on mixed-use development, and on access for people on bike and on foot! There's tons of potential here for a walkable neighborhood!

(The building on the action plan cover is the old West Salem City Hall. It was built in an art deco style in 1935 as a WPA project. Down the middle of second street is the old Salem, Falls City & Western rail right of way that links to the Union St. Railroad Bridge. Rails-to-Trails! There's some of that historic character.)
Posted by Salem Breakfast on Bikes at 7:00 AM

Good stuff, Eric. This initiative will be critical to the success of the Salem Greenway Trail. W Salem will be the "gateway" to the system. The Rs-t-Ts project you mention is on the radar of the Salem Area Trail Alliance. Hopefully the City and SATA can work together to make this trail a reality. I contacted the SBC, with the intent of sharing SATA's mission/vision, with no response. Any suggestions as to who I should contact?

Ah, I should clarify: There is no Rails-to-Trails project on 2nd envisioned currently. I think my note was ambiguous about that and possibly misleading. Let me restate it: I wish there was an RtP project there! Let City Councilor Dan Clem know your interest! dclem@cityofsalem.net