Autoist Spin: Under the Sign of Addition Commercial at Kuebler is Subtraction

Over on the Facebook, the City's been posting notes about the upcoming street and road projects.

One of the big ones is at Commercial and Kuebler.

About it the City says:

For whom does this improve things? Not all road users!

For people on foot and on bike, Boone Road is sometimes more pleasant than Kuebler, and it looks like what had been a frogger-style scamper may now be expressly forbidden with closed crosswalks. If so, out-of-direction travel definitely maximizes delay!

That orange median looks like it will compound difficulty rather than ease the crossing. While this makes sense for zooming car traffic, because Kuebler is so rotten for people on foot or on bike, piling up the barriers at Boone here is really a strike against urban mobility and a move for compulsory autoism.

Additionally, there is a complicated weave with the bike lane and turn lane here. If you are south-bound on Commercial, the curbside bike lane terminates just before the corner at Boone. Then, in the middle of the intersection and just south of it, there's the transition with the right-turn only onto Kuebler, and the bike lane is sandwiched between the through-lanes and the right-turn lane. There are two potential right-hooks here: Right-turns onto Boone and right-ward weaves for the right-turn onto Kuebler.

This makes me queasy.

On Kuebler, the east-bound bike lane here also has a transition across a right-turn lane for cars. Kuebler is very fast here, and I just don't see how the weave is very safe at all. No green paint, even, like on Glen Creek at Wallace. When traffic is slowed it may be usable, but at highway speed a driver will be on top of you and crushing you in an instant.

Sure, placing the bike lanes on the left of the right-turn only car lane helps protect against a right-hook crash, but the necessary merging movement prior is nerve-wracking and hardly safer.

The proliferation of slip lanes also looks like it prioritizes auto turning movements at the clear expense of those on foot and on bike.

And if you are going east on Kuebler and wish to turn north onto Commercial - what a Rube Goldberg set of maneuvers you'll need to make! A lot of the turns here are really complicated.

No matter what you think of each individual component, in aggregate it's hard to say they improve things.

More crucially, they utterly fail the test of something a child might use safely on their own. Would you send your child for ice cream to bike on this? 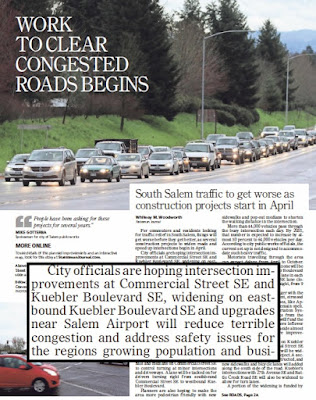 Why would anyone walk or bike here for any reason other than absolutely necessity to get to somewhere else? Whom are we serving here?

It is now five years since we were in the middle of "Bike and Walk Salem," our update to the Transportation System Plan, and the insights it generated sit only very lightly as veneer on top of autoism and road design as usual.

It's true that, for example, we are grappling more deeply with things like connections on Union Street to the Union Street Railroad Bridge, but we are still struggling to get past sharrows. There is no definite plan yet for a fully protected bike lane anywhere in Salem. A bike boulevard on Winter-Maple is theoretical at the moment, and it is not certain it won't be a struggle to make sure it has robust design elements for non-auto traffic and is not a bike boulevard in name only, a line on a map. And out here, far away from the center of the city, on this near highway-level interchange, there's almost no evidence of the analysis in "Bike and Walk Salem." This is still 1980s engineering, not best practices, not even current 2010s design.

Still a generation behind.
Posted by Salem Breakfast on Bikes at 1:00 PM

I totally agree with you on this so called improvement. It will help cars, but it will be disaster for pedestrians. It is very similar to what they did at Lancaster and Market. There are lots of low-income apartments in the area and people used to walk to nearby stores. Some even used the mobile wheel chairs to go to the store. Not anymore! They have to rely on friends or family ar pay for the CherryLift to give them transport by car.

What happens in that you can't cross on the light in the time that is given. With the new traffic law that allows cars to go as soon as a person clears the lane, you are at risk and feel stressed. So, a lot of people do not try it. I wish there were a way to design these streets so that an island can be created for pedestrians to take refuge in while waiting for traffic to clear, but the truth is that with this kind of volume, there is never a break in the action.

Almost no one bikes on Lancaster or Market anymore.

It did seem to cut down on auto accidents, so it was not a total waste.