Well, this is interesting! 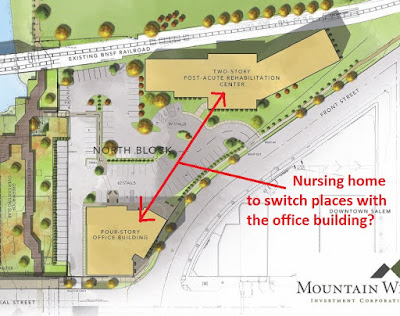 In an announcement in the paper this evening about the north block parcel at the Boise Redevelopment, it looks like there's a major shift in site disposition for the buildings.

The nursing home, you may recall, was sandwiched into the angle of Front/Trade and the railroad.

Now it looks like the office building will be in that wedge-shaped space.

And on the rounded corner at Commercial, instead there will be the nursing home.

These plans suggest a much more walkable plaza at the corner. It's still not great because of the zooming traffic, and I really wonder if many people will actually want to sit there and hang out, but at least as a concept elevation, it looks more promising and something that will potentially help to activate the sculpture garden kitty-corner at the Conference Center.

And here's the old office configuration on the corner.

About the nursing home itself - yeah, that's still a suboptimal use for prime downtown creekside real estate, and it's too bad that something more lively like restaurants or shops still could not have been substituted for that.

Anyway, the piece in the paper doesn't include any architect credits, and it may be that CB|Two is no longer engaged for the projects. (I'll update the image credits with any new info.)

I don't know that the switch is all that important now, but it's interesting and maybe will be an improvement. Hopefully more info will come out if there is formal site plan and design review!

CB|Two for the nursing home, AC+CO for the "flatiron" building! I'm really warming up to the plaza on the corner. It's not going to "solve" that corner and magically transform it into a walkable paradise, but it seems like it's a strong move in the right direction, especially considering the constraints from decisions already made about the Boise project.

The "flatiron" concept also fits better with the contraints created by the railroad and, given the limits of walking along Front/Trade there, will create a much more interesting walking experience and visually interesting building form.

It seems like switching the two buildings, along with the design changes, really improves the total effect. I like it.

Briefly, forget the "flatiron" building! Remember instead the Fry warehouse.

Posted by Salem Breakfast on Bikes at 8:30 PM

The office building is being designed by AC+CO and the Marquis project is CB Two Architects, LLC. Currently the Marquis Companies rehabilitation facility will have retail space on the ground floor near the intersection of Front and Commercial with the plaza for seating.

Thanks! will update image credits later!

And! updated with image of Fry warehouse, a triangular building a lot like the planned office building. Surely the echo is intentional.

Is anyone concerned that this will block the view of the river from the Convention Center? Just wondering.

Well, if the Fry Warehouse wasn't a problem at design and construction for the Conference Center, why would this new "flatiron" building of very similar mass and height be any different?

More generally, why would anyone think it will be other than a vast improvement on the concrete slab and mess that is there now?

Some additions to our meagre urban skyline will make for a pleasant view!

The mayor said something last year about being upset to lose the view of the river from the Convention Center, but did not more than complain. But you make a good point in that anything there is likely to block the view. At least the corner will be finished off in a way that is better than nothing like it is now. I may be criticized by some for this opinion, but I am pleased to see the whole development happening. I think it is maybe not the best design overall, but it is such an improvement to the area. I hope it sparks more development downtown.

Someone recently criticized Salem as not be as nice as Portland or Hillsboro or whatever, but I think we have a lot going for us. We lack vision and we lack leadership and we lack faith in our government, BUT there is so much potential here and many good people trying to make it a better place to live, work and play!

I appreciate what the biking community is trying to do to make things more 'people friendly' !