As the Downtown Advisory Board is working on the scope for a small $1.2 million streetscape project, there might be some great ideas here for downtown!

Our streets are so broad downtown. There's tons of space we can consider using more efficiently. We have really limited our imaginations with it.

Back in the 1996 Riverfront/Downtown Core Area Master Plan, there was a concept for much widened sidewalks. But we never did it!

That concept didn't add bike lanes or modify the amount of parking, though, and now we might also want to make adjustments to these things as well. In several cities sales have gone up when bike lanes have gone in. (Sometimes curbside parking is removed, as well!)

Paint and plastic wands offer a way to experiment with non-permanent installations, and is something the City should consider more strongly. 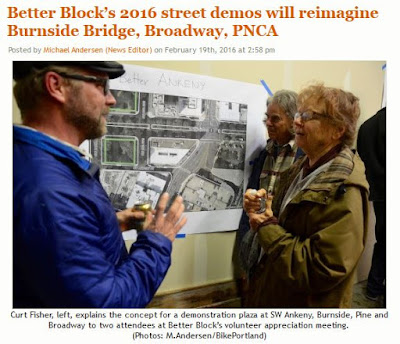 As Curt mentioned in a comment, BikePortland posted a story a while ago about the 2016 edition of "Better Block PDX," an enterprise described last year in the Portland Mercury as


the local chapter of a national movement to reimagine public space[. Last year they] popped up seemingly out of nowhere last fall with big notions of how to spiff up dingy Old Town. With buy-in from business owners and city officials, the group molded an ultra-wide, three-lane segment of SW 3rd into a pedestrian plaza. One lane of car traffic was permitted to trickle through. The rest was given over to bikes, and walking, and leisure.

This year in partnership with PSU, they're expanding the number of projects.

Curt worked on one for the infamous sneckdown formed by the triangle of Broadway, Ankeny, and Burnside in downtown Portland. 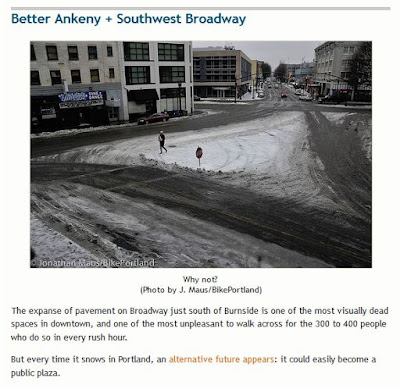 
Partly inspired by what PSU’s Curt Fisher called a “famous BikePortland photo” and wishing for a space at the heart of the city that could become Portland’s answer to Times Square, a team of planning students developed two concepts: one for a triangular space that’s currently unused for almost anything except walking...And one more ambitious version that would take Broadway down to one southbound travel lane plus a bike lane to create a large parklike space with food carts and more. Both plans also envision a new “Ankeny Alley West”: repeating the experiment of SW Ankeny Street between 2nd and 3rd, where a block once used mostly for parking has been rented by businesses to add outdoor cafe tables

Check out the full story for the plaza concepts!
Posted by Salem Breakfast on Bikes at 12:01 PM

BikePortland had a nice report on a tactical urbanism project I worked on in Portland last year. We may get the chance to install it this summer! As you say, Salem's large streets offer many opportunities for similar projects here. Our project didn't cost anywhere near $1.2mil.

Thanks! I had a draft post in the queue from a while ago, but sat on it as you seemed to be keeping a lower profile. So I just incorporated the bulk of it here.