You probably saw the news that Starbucks abruptly closed the store at the corner of Chemeketa and Liberty.

The vacant bank across the street and the fact that Penney's lacks a corner entry are certainly ingredients in the lack of foot traffic here and exacerbate difficulties that Liberty Plaza itself has had in keeping quality tenants.

But another ingredient in the lack of foot traffic is the way the skybridges here suck people, energy, and life off of the street-level sidewalks and reinforce the blank walls and boxy forms of Liberty Plaza, Penny's, and the Mall - especially the blank brick of the mall walls.

The contrast with the more vital street activity at Liberty and Court is strong.

I believe our skybridges harm downtown vitality, and that we should consider getting rid of them - or at least spending more energy and resources designing our streets and sidewalks to compensate for their siphoning action.

Their origins had been somewhat mysterious, but a document recently posted by Salem Community Vision tells perhaps more about their origin.

Salem Tomorrow Report, (1984) was a visioning document, described as "quasi-official," written by volunteers with a City Councilor and with the blessing of Mayor Harris (nee Harris, now Sue Miller).


While other sections of the country have either torn down existing structures in order to establish enclosed shopping malls, or turned over other open spaces to this use, the City of Salem has directed its attention to accomplishing much of the same result without the need of such extensive demolition, reconstruction, or diminishment of open spaces. The answer in Salem appears to be the establishment of skywalks in the downtown area.

A skywalk is an above-ground, pedestrian bridge system which interconnects adjacent buildings with interior corridors, thus permitting pedestrian travel above grade across city streets. Such structures would allow shoppers to traverse the downtown commercial area without leaving a controlled, not the least of which is dry, environment. In essence, the effect will be one of creating a shopping mall effect with unlimited access to commercial establishments without competing with either automobiles or the elements.

The first skywalk will connect J.C. Penny's with Nordstrom Mall, and construction on this first link is proposed for the fall of 1984, with public bid and contract to be awarded during the summer of 1984.

The City, through its Urban Renewal Agency, will act as a catalyst using tax increment financing. The building owners and tenants will execute a promissory note to purchase the skywalk from the City over a 15 year period, with 10 inter- est. Anticipated total cost for the initial span will be approximately 250,000, presently 1 funded, and it is anticipated that it will open in the fall of 1984. Thereafter additional links are anticipated to be constructed between other major facilities in the core area. 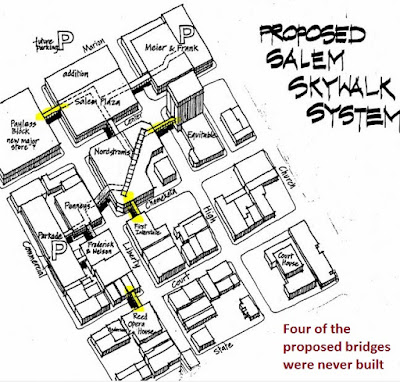 Happily, only half of the network was built. You'll notice that connections to Payless/Rite-Aid, to the Belluschi/First Interstate Bank, to the Reed Opera House, and to the Equitable tower were not completed.

It might be too much to ask for the ones that were built to be removed. They connect parking garages with the mall and big chain department stores. If "a shopping mall effect with unlimited access to commercial establishments without competing with either automobiles or the elements" is what you want, they deliver.

But they are also rooted in car-oriented mid-century demolition and redevelopment on the "mall" template. If they offer shelter from rain and other zooming cars, they also inhibit circulation on the sidewalks and connections with the smaller and older storefronts that retain streetcar scale and pattern. Skybridges get cars and car exhaust away from people - but crucially, they also get people out of the way so car drivers don't have to stop or slow. They are pedestrian displacement systems.

In total, skybridges correlate with coarse-grained biggness and dullness and work against finer grained variety and vitality.

The Downtown Advisory Board met yesterday, and in the minutes for the February 11th meeting are notes that they are allocating $1.2 million in urban renewal funds to a "downtown streetscape" project. A subcommittee of four DAB members has been working to define a scope of work to give to a consultant for the project.

The dollar amount is too small to fund removal of the skybridges, but maybe folks can think about this more and more.

In the meantime, there are elements from the Vision 2020 project, from the Downtown Mobility Study, and from the Salem Downtown Partnership's concepts - and maybe you will know of others - to draw on and combine in a revised plan that we will actually fund and construct.

The solution to downtown streets is not MOAR PARKING, but is more people strolling and shopping. People on foot are the foundation of this, and they arrive by many different means, not just driving. The most successful streetscape project will put people first and ask parking and traffic to support that - not parking and traffic speed to lead.

If one approach has been to leave car traffic and to remove walking people, the verdict is in: That approach doesn't work. It's time for a new approach that has a heavy dose of traffic calming and support for walking.
Posted by Salem Breakfast on Bikes at 12:01 PM

Great post. Wholeheartedly agree. Last year Charlie Hales made a statement that the city of Portland had adopted new design guidelines that prohibit the construction of any new skybridges and that it was city policy have the existing skybridges removed at the first opportunity. Being from Salem, I find it surreal that Portland city leaders speak with such clarity and conviction on the value of good urban design.

I have thought a lot about why I do not stop and shop on some of the streets in Salem and why others are more inviting. i have come to the realization that for me it is the parking. Not the amount of parking, but the kind of parking. I avoid parallel parking. I especially avoid parallel parking on a street that seems busy. This is because you have to stop in traffic, get the person behind you to remain far enough behind you to allow for you to back up and then park. AND if you do not park properly the first time, then you have to try again! It is not easy even if you are practiced, which I am not Plus my new Hyundai has almost impossible rear visibility ( it does not have a back up camera either). So, if I am going to parallel park it will be only in very limited locations. Liberty Street has all the factors that I find off-putting. The traffic is too fast, too heavy and parking is too hard. So, I just never stop and thus never shop in any of the stores in that area. I kind of am interested, but the street is totally uninviting.

The street scape that you copied here to me makes it even more uninviting to me. I would prefer two (maybe 3) lanes of traffic with head in parking only. I think that was the way it was when I was a kid and that was about the last time I used to frequent the area.

I'm happy that you have so many parking opportunities at Keizer Station, Lancaster Mall, South Commercial and soon Keubler Station! The future of parking is bright in Salem!

Anon 1 is right about Portland. They don't allow blank walls either. Active ground floor uses and minimum window glazing are also design requirements in the central city. What they have in Portland is no accident--its the result of decisive city action and committed leadership.


Granted that a wall of brick or concrete is not very interesting to look at, but neither is a wall of glass that has the shades drawn (usually ground offices that want either privacy or less glare, examples in downtown Salem are too many to list) or empty buildings (ditto).

The document states that the skywalks were to be city funded and then purchased over time by the businesses. Does anyone know if that happened?

"The skywalks are an exclusive zone that cost millions of dollars to create and have siphoned business and activity away from the streets. Now some cities are trying to bring pedestrians back onto the street and make better use of the existing public sidewalks."