Even the Feds are Beginning to See: Too much Subsidy for Autoism 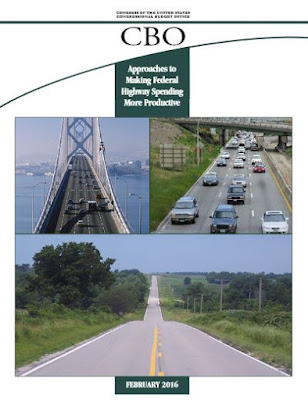 There's a new report from the non-partisan Congressional Budget Office that has been making the rounds. Titled "Approaches to Making Federal Highway Spending more Productive," it leads with this:


Spending on highways does not correspond very well with how the roads are used and valued.

Over at City Observatory, economist Joe Cortright has some great commentary:


the translation is straightforward: the big cause of our transportation problems is that we’re charging road users the wrong price.

Collectively, road users are paying too little for what they use, which is why taxpayers have had to chip in more than $140 billion over the past seven years to make up shortfalls in the Highway Trust Fund....

Drivers who use lots of expensive capacity (urban roads at peak travel times) don’t pay their costs, and money gets allocated to spending that produces limited value for the nation.

There's also a nice critique of false-equivalence in discussions about autoism:


other modes, like transit or biking or walking, don’t cover their own costs with user fees, either—there’s no sidewalk maintenance toll, and nor should there be....We’re not confronting the cost of multi-billion dollar sidewalk investment projects due to peak hour congestion caused by under-priced foot traffic. Just as importantly, transit riders, bikers, and riders don’t create any, or very, very small amounts, of the major social costs of driving, from deaths and injuries in crashes to pollution.

Anyway, it's worth a read.

Over at the Economist, they also say "stop subsidizing driving."

And another set of pieces from the Washington Post have also been making the rounds.

The car century was a mistake. It’s time to move on. https://t.co/wRMoW4Haa5 via @PostOpinions
— Washington Post (@washingtonpost) March 1, 2016

And:
And to get out of the echo chamber with a heady dose of cranky and contrarian skepticism? Chief Autoist and everybody's favorite TransitFoe!