Local MPO to get Update on Mission St/OR-22 Plan; Open House on the 30th

Next Tuesday the Policy Committee for our local Metropolitan Planning Organization meets, and there's a couple of interesting things. (Meeting packet and agenda here - 168pp.)

Most interesting is material on the OR-22/Mission Street study, which will have an Open House on the 30th.

Overall, the material shows the thinness of our imagination and the failure of our moral framework in designing and assessing roadways. Two or three generations from now, historians will look back on this stuff in amazement that we tolerated so much death and injury arising from "ordinary" and "routine" use of the public space we call a "road."

First off, in our official approach to design and assessment we're still stuck on eliminating the moral and effective agency of human drivers ostensibly in charge of a motor vehicle moving swiftly with lethal power.

A person, a human operator, not an autonomous "passenger vehicle," ran the red light, struck, and killed Connor Jordan while Jordan made a lawful and prudent crossing in the marked crosswalk. It was human error, not robot error!

And the human error was compounded by roadway design intent. It was on a roadway posted and designed for highway speeds, speeds we know are almost certain to kill a person exposed while walking or biking. At 20mph, running the red light might have given Jordan enough time for an evasive maneuver, or let the driver brake or make a steering recovery, or mitigated the severity of the crash so at least he didn't lose his life. In every way, speed kills.

But because we insist on a system of hydraulic autoism that privileges free-flowing and fluid auto traffic, his death is just noise in the system, the speed that caused death the necessary flowing action to avoid congestion.

Inside the city limits 85th percentile speeds - so, remember, that means 15% of  people are going faster! - range from 43mph to 69mph. At these speeds a crash involving a person on foot or on bike is nearly certain to be fatal.

Apparently the vision for the future is even worse:


In the Long-range Transportation Strategy section (years beyond 2030), it is recommended that OR 22 may become a limited access facility through the Salem Urban Area. One improvement identified in the long-range plan is a new interchange at Cordon Road which should become part of a series of grade-separated interchanges at Cordon Road SE, Lancaster Drive SE, InterstateS, and Hawthorne Avenue SE. Another improvement would be to eliminate driveway accesses along Mission Street SE/OR 22 between Hawthorne Avenue SE and Church Street SE and instead have a system of frontage roads to provide access to properties lacking frontage on side streets. [italics added]

That's like Kuebler or the Salem Parkway. That's a pretty bleak vision of autoism, and will create a canyon impeding north-south connectivity across Mission Street.

This is a great reason for the State to devolve funding and control of "urban highways" to the cities. For all the criticism here of the City of Salem, I'd still rather have City Council rather than ODOT making decisions about Mission Street/OR-22 inside the city limits.

A lot of the impetus for the project is "freight."

Interestingly, it turns out there are reasons to question our analytical framework also for freight.

At the Active Transportation Summit this week, economist Joe Cortright presented a new critique (at least one new here).

I had thought the loss of Hanjin was a terrible blow, but here's some preliminary evidence that suggests this is not at all the case. I'm not sure this is conclusive, but it's very interesting and shows that we just cannot uncritically accept shibboleths about "freight, freight, freight." At the very least we need to push our analysis of freight's importance and double-check the conventional wisdom about it. What we "think" is true, may not in fact be true.

Back to bike things, in the "Future Conditions and Needs Memo" there is a brief assessment of the sidewalks and bike lanes. 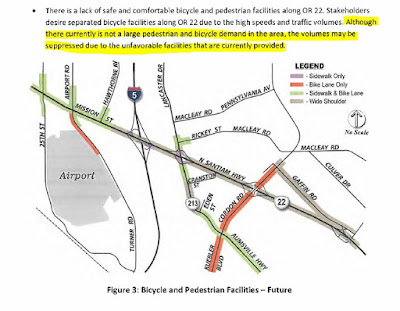 It contains a great understatement:


Although there currently is not a large pedestrian and bicycle demand in the area, the volumes may be suppressed due to the unfavorable facilities that are currently provided.

But it also lacks the same kind of rudimentary multi-modal "level of service" analysis that the same consultant performed for the Commercial-Vista Corridor Study.

You can see how having as a client the highway branch of ODOT instead of the TGM group makes a substantial difference in the resulting memos and conclusions.

It seems clear that improved sidewalks and bike lanes and crossing facilities will be secondary considerations, things wedged in on the margins after the primary flow for auto traffic is assured.

The annual work plan is also on the SKATS agenda, and there may be more to say on it in a separate post.