"Envision" sounds like an antidepressant or a geriatric medication. It's soporific, is what it is! 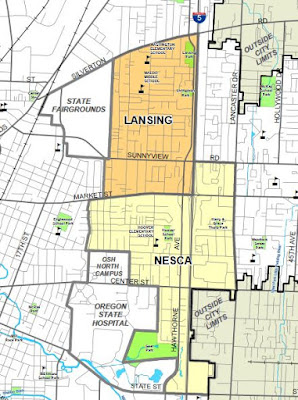 But it's also the name for the Lansing-NESCA neighborhood plan update project.

Hopefully it won't put you to sleep, because it's potentially useful and important.

One of the major issues for it will be the North State Hospital redevelopment. There's a trio of possible outcomes there:
Additionally, it is increasingly clear than an important way to reduce the cost of housing is to reduce required parking and to make sure new development is walkable and well served by transit.

If we don't have to build subsidized homes for cars, we can build more homes for people. And if because they can walk or bike or bus households can make do with n-1 cars, then it's not at all far-fetched to suggest there's an extra $5,000 or $10,000 in the annual household budget.

Even aside from environmental issues, there are important reasons to want a lower-car future.

The eastern boundaries of the two neighborhoods are weird: I-5 or Lancaster is the natural boundary, but because of the surplus of unincorporated county land at Four Corners and Hayesville, the eastern boundary of the neighborhood plan doesn't follow a natural line. This may introduce some interesting skew into things.

Transportation offers a lot of potential for remediation. North-south there is little natural connectivity through the area, and I think Hawthorne, a strange sort of frontage road, is the only one. Of course I-5 itself is also a major disruptor. East-west, several old market roads that have become stroads cut the neighborhood into sectors and offer the only connectivity to Lancaster and its commercial centers: State, Center, Market, Sunnyview, Silverton. D Street hasn't been messed with as much and may have more potential as a human-scaled whole street. And there is the abandoned Geer Line through the very southern portion. But none of these would be cheap projects to fix.

Reverting to less auto-centric forms of development on them would also help service the immediately adjoining neighborhoods with more walkable commerce.

In the interiors of the neighborhoods, since they are outside of the original streetcar-era boundaries, the grid has broken down and the local streets aren't always as connected as much as might be most useful. There might be some interesting possibilities for mitigation there.

Anyway, the character here is different from that in Morningside or in NEN-SENSA, the locations of two most recent plan projects, and it will be interesting to follow this project. If you live or work in the neighborhoods, be sure to join in!

The first meeting will be 6:30 p.m. Tuesday, April 12th at Salem First Church of the Nazarene, which is located at 1550 Market Street NE.
Posted by Salem Breakfast on Bikes at 7:00 AM

Here's an interesting note from a recent TRB abstract:

"As a whole, the top 100 census tracts [for bike commuting] had a bicycle commute mode share of 21%. Seventy of the top 100 census tracts were in locations that had fewer than 10 days per year with high temperatures below 32°F (0°C), and 68 were within 2 mi (3.2 km) of a college or university campus. Seventeen had relatively low college populations and were in high-density neighborhoods close to large city central business districts....After climate and topography were controlled for, being a top 100 census tract was associated with several socioeconomic and local-environment characteristics, including being located closer to a university and having more households without automobiles, more people born in other states and countries, higher population density, more housing constructed before 1940, and greater bicycle facility density. The results suggest that policies to model employment centers after university campuses; design neighborhoods that support routine, multimodal travel; and reduce barriers to bicycling in bad weather may help create more local areas with high rates of bicycle commuting."

Not sure there's any great surprise here, but the data behind it might be useful in dispelling myths.