Rapid Response on Bike Lanes shows too Much Myth

Lots of interesting things in the "rapid response" speed-date style letters to the editor today.

But one in particular is especially dismaying.

A person who represents himself as regular cyclist says:


As a bike rider, I appreciate special lanes but as a taxpayer, it is hard to justify removing car parking and travel lanes downtown.

Downtown is not really a problem area for me as a bike rider. I bike about as fast as most cars drive downtown. I’d rather see improvements for bikes on well-traveled roads, where cars are going much faster than bikes and there currently is little road shoulder.

"Downtown is not really a problem area for me."

This is a pure expression of strong and skillful riders who seem to think that their fitness and confidence is average and normative!

In the bicycle world, in fact, this is the tyranny of the 1%!

How about facilities for the other 99%? - or at least the 67% who want to be able to ride in comfort and safety at least occasionally.

This is evidence for the way that there is no such thing as "the bicycle community," that the interests and preferences of those who bike are not unitary or monolithic.

Whether by accident or intent, there is a small cadre of people who bike who apparently like downtown the perilous and exclusive way it is!

They are not representative.

Other responses have lots of opinion that is not always well supported by fact. 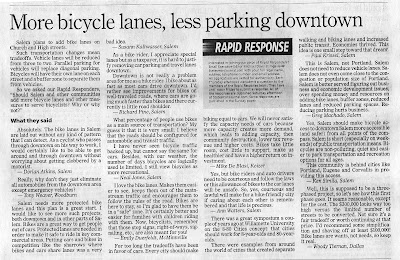 
What percentage of people use bikes as a main source of transportation? My guess it that it is very small. I believe that the roads should be configured for automobile and transit traffic.

We configure roads for future demand. We don't generally design roads to service existing demand only.

Data from Salt Lake City and New York and elsewhere show that taking out parking and putting in bike lanes actually increase business. Too much car parking not only requires subsidy, but it also discourages visits from other customers. Moreover, people on bike visit more often - they can't carry as much! - and over many visits end up spending more for a higher "lifetime value."


I think that if Salem did a study over the last 10 years, they would find that automobile traffic has increased many times over than bicycle traffic. We already have a situation of gridlock in nearly all of our downtown streets. Removing more auto traffic lanes will only exacerbate the existing problem.

Nope, not true either.

And again, we should design for the future we want, not the present we have.

Anyway, too much of the rhetoric and positioning about bike lanes is related to bicycling as symbol and to feeling rather than to fact, data, or substantive argument. Fortunately, the overall sentiment - including some familiar names from commenters here! - seemed to be in favor of the lanes.
Posted by Salem Breakfast on Bikes at 10:00 AM

Many more people would be on their bikes if the infrastructure made cycling safe and convenient. This includes protected bike lanes, city bikes with stations throughout the downtown area, convenient bus/bike options, and park 'n ride lots that connect to a robust system of mass transit.

With the existing infrastructure, cycling is an option only for highly confident, adult riders. My kids are grown now, but if they were young I certainly would not want them out on a bike in Salem, beyond biking around the neighborhood or driving out to Minto Island and cycling there.

Thanks for educating folks about the very real advantages of a diverse transportation system for health, for the environment, and for a prosperous downtown.