OTC to Allocate nearly $200 Million Windfall - But a Missed Opportunity?

It's hard to track the OTC and other state-level things on a consistent basis, so mostly we leave that to others. The MPO is the largest unit it has been practical to follow consistently - more on them later in the week! So this is an abbreviated and incomplete note.

The Oregon Transportation Commission meets tomorrow, Thursday the 17th, and there's quite a quiet slush fund in play.

Somehow this doesn't look quite balanced.

It looks like ODOT has plans to spend $196M and I certainly haven't heard much about it yet. Curious others' thoughts.
— Gerik Kransky (@gerikkransky) March 16, 2016

It seems like the priorities and proportions ought to be vetted more in public. The BTA's public advocate doesn't seem to have heard much about it.

Especially in light of the needs identified in the draft Bicycle and Pedestrian Plan, the Enhance Non-Highway allocation seems mean and cheap! 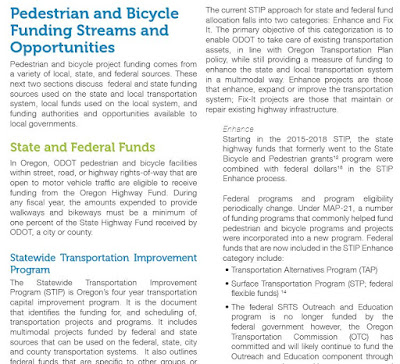 Probably there should be more biking and walking things, and more seismic things as well. Some of the other buckets seem like candidates for reduction. Some of the buckets have federal mandates, but others have more state-level discretion.

You might also recall our MPO Chair saying "current local plans would accomplish the [greenhouse gas] targets if there was money to fund the projects included, [but] unfunded, in those plans."

Well, here's a pot of money that could go to greenhouse gas reduction!

The point is, we make very deliberate policy and funding choices not to support greenhouse gas reduction and sustainable transportation.

Instead it's business as usual with late 20th century patterns of spending and road expansion.

You might also recall David Bragdon's critique of ODOT from the fall:

In this morning's BikePortland story on this, they link to a January letter from the BTA asking for a different set of priorities...

Also recall that to be eligible for Safe Routes to School funding, the jurisdiction and school district need to prepare a plan for each school. That is a limiting factor in the Salem-Keizer area.

Transportation for America claims the funds are more flexible than ODOT implied!