Last night was the first Open House for the State Street Study and at least two candidates for City Council have posted to facebook about it already (here, here). That was nice to see!

The meeting slides and boards are posted and in the second half they broke up into small groups. 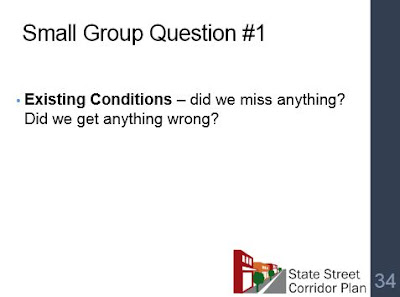 The first question for the groups was, "Did we miss anything?"

And from here the biggest problem looks like our increasingly counter-productive obsession with Levels of Service for automobiles and the antiquated mobility standards that are behind it. 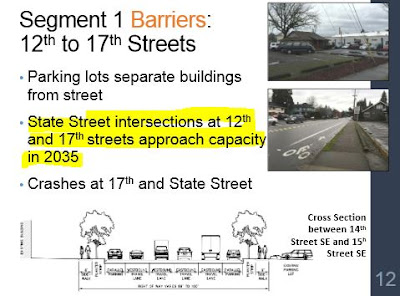 If there is a thing that right from the outset could tank or seriously compromise the project, this is a leading candidate. 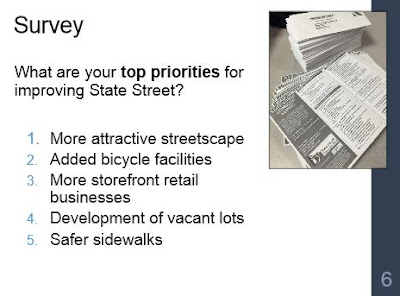 No matter how terrific is our rhetoric about making things better for people on foot and on bike, if formally we limit ourselves to solutions that preserve Eisenhower-era mobility standards for automobile traffic, we will get Eisenhower-era solutions!

If we don't want State Street to look like it currently exists, then measuring it for 2035 by the standards that led us to this exact outcome in 2015 is methodologically totally wrong. If we want a different outcome, we need different measurements.

Digression on Traffic Modeling for 2035

Briefly, the mobility standards for 2035 are problematic for two reasons.

The first is math and science. The model is broken and no longer corresponds to reality.

Since before the Great Recession in 2008, traffic plateaued. Cheap gas has meant an uptick, but still there are reasons to think our patterns of driving are undergoing structural changes. Even the highway-happy Feds are changing their model (which is still pretty autoist).

Here in Salem the modeling that underlies claims that intersections will be at or above capacity in 2035 continues to rely on 20th century assumptions that are no longer true.

Empirically, the model is broken, and we cannot trust its assessments.

The other reason we should be doubtful about claims for 2035 capacity is about values, not math.

We have said in our highest level policy document, the Salem Area Comprehensive Plan, that


transportation system and demand management measures, enhanced transit service, and provision for bicycle and pedestrian facilities shall be pursued as a first choice for accommodating travel demand and relieving congestion in a travel corridor, before widening projects are constructed.

The "first choice for accommodating travel demand and relieving congestion in a travel corridor [like State Street!], before widening projects are constructed" should be provisions for things other than drive-alone trips.

It's right there, in black and white. We should not let some hypothetical demand and a faulty model for 2035 constrain our vision here.

It's time that our studies actually enact the values we profess to hold.

Back to the Study

Like so other recent studies, if we don't change the analytical frame, we will start with optimism and end in a pallid, timid set of minor, incremental changes that don't alter the underlying structural problems.

So it looks like an important area for criticism and comment right off the bat is to say that this study by its very nature means that a commitment to mobility standards for 2035 is inappropriate and that alternate mobility targets need to be developed and adhered to.

If we judge this project by car traffic only, it is doomed to failure. 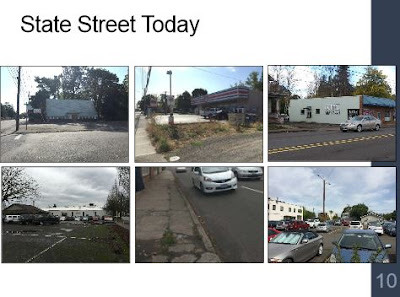 And you wouldn't think this would be so difficult to prove. Here's a great set of images that show autoist blight.

In response, the project team correctly identifies some of the great bones that are underneath the corridor! 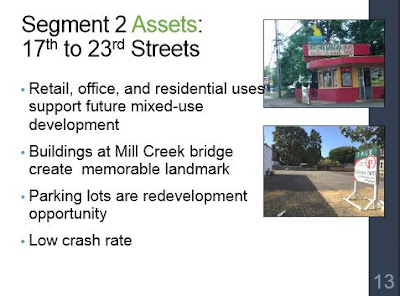 In general terms the presentation looks solid, but the point about 2035 mobility standards is very concerning.

This will be a route to the gradual erosion of vision for the project and yield a dim set of minor, incremental improvements. The project team will say "we tried," but "the ideas didn't meet requirements for auto capacity in 2035." What a sad epitaph that would be.

For previous notes on the State Street Study see here.

Here's a cartoon that illustrates a back-n-forth in the comments below:

When I went to the meeting last week, I was relieved that I didn't hear a thing about widening State Street. Actually, the only "widening" I heard about was making sidewalks along State St. wider, which was refreshing. Also at the meeting, nearly every small work group that reported back to the larger group said that they wanted only 2 lanes and a center turn lane on State St., and they wanted car lanes to be narrower and the speed reduced. There was conversation around whether or not to have bike lanes on State or to direct riders to parallel bike facilities along Ferry St. (south) and Court St. (north) instead and then reconnect at State somehow west of 12th St.

Well, I suppose this is perhaps a bit of a disagreement on the edges and not on a central matter...

Because of the constraints in right-of-way width, it seemed likely from the start that widening wasn't an important possibility.

But the point about 2035 capacity standards is less about widening than it is about the ways that an attachment to some hypothetical future and to LOS analysis for cars will limit the possibilities for reshaping the roadway so it serves a larger number of people, especially those not in cars.

The fact that you mention directing people on bike to Ferry/Court kindof proves the point. From the very start it seems we're at risk of letting auto capacity "needs" dictate an alternative that displaces people from where they actually want to be and go.

1) It resembles the way Saginaw functions as a displacement for people going south on Commercial Street SE between Mission and Rural. But of course all the important business destinations are on Commercial. Similarly, the destinations will be on State Street, and it is reasonable that people will want to bike on it.

2) Because of the Court St footbridge on Mill Creek between 18th & 20th, which is better for walking than biking, because Court ends at 21st, and because Chemeketa extends all the way from 25th to Front St, Chemeketa has seemed a preferable low-traffic alternative, not Court.

We should go ahead and plan a better bike boulevard for Chemeketa and Mill, and maybe some spot improvements for Ferry and Court - but we shouldn't use them as an excuse to not make State Street accessible for ordinary people on bike. Our solution for State Street shouldn't be a bicycle displacement system to "get them out the way."

Anyway, it is premature to get wound up about anything just yet! But it seems like there's something to watch and perhaps be a little wary of already.

Yes, I agree about your point about the 2035 capacity standards, and they should be using the revised standards and not clinging to the old to inform decision-making today.

As for parallel bike facilities, those who advocated for them the most (at my table) were actually bicyclists, which I thought was interesting. But, I understand your point about the car-first mentality that pervades this and other street improvement studies. Actually, my first thought entering the meeting was to have bike facilities of some sort on State St. itself because it's the street that's already being used to provide that east-west connection to downtown. The bicyclists at my table, however, felt that the riding experience on either Ferry or Chemeketa would be more pleasant and safe, even after an improved State St. Perhaps their attitudes towards State St. will change as this project progresses?

Also, I'd like to correct a mistake I made in my post above -- it was Chemeketa St. (not Court) that was identified by my table members as the northern parallel bike facility because of all the reasons you state above. Thanks for pointing that out.

Here's a cartoon for follow-up!

Maybe the best way to think is that a high-quality low-traffic supplement to State Street would be a very nice thing.

But a nearly mandatory low-traffic alternative route would not be very helpful.

Nice. I like the idea of thinking of it as a supplement, rather than as a mandatory route.

The meeting notes are posted now. I don't know how interesting they necessarily are at this point: They're scattered and not always coherent.

For example, in one place:

"There is an excess of surface parking lots, with the excess often leased to area employers."

"City should have a parking garage in the area for people to use."

So it will be more interesting to see how the project team adjudicates the tensions and contradictions in shaping a draft set of recommendations.

Over at On the Way, Bonnie Hull has a nice note about a project a generation ago, circa 1990, on State Street.

Some of the trees they planted then are at risk of being cut down now.

It is also a sad comment on the loss of institutional memory, as she claims none of the City staffers were aware of the project.