On Social Media the City announced a new database and website for Council agenda.


To get City of Salem Council materials out to you earlier, we're using a new tool for sharing City Council agendas and meeting materials. Beginning with June 6 meeting, to access Council meeting materials, you'll still click on the "Meeting Agendas".

What you'll find is a list of upcoming meetings and links to meeting materials, audio, and video. Those upcoming public hearings, Council work sessions and future agenda items will be featured at the end of the agenda - instead of the beginning. And, you'll still be able to find materials from previous meetings in the old system while we're moving them over to the new.

The first impression is that this adds layers and makes it more difficult to find and access Staff Reports and other agenda items! It's a little like a Ptolemaic epicycle.

Internally it might be easier to load and publish Staff Reports - as a "content management system" it might seem to offer advantages, especially for internal city staff.

But as a move for better communications, as it faces outward to the public it looks clunky rather than elegant - an "improvement" only a software engineer would love. While it may be more organized in theory, in practice it is still looks labyrinthine.

There's a new url for the calendar and hopefully this will not complicate searching - or break old links. 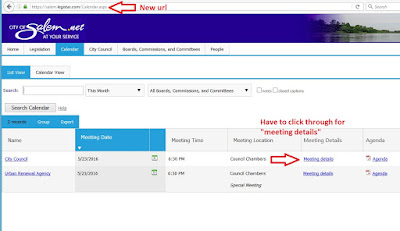 You have to click through to the "meeting details" for a Council agenda.

This one for the meeting just past lists 21 items. It's less "wall of text" than the old style, but in its listness it's still not easy to grasp what might be relevant and what is not. A "proclamation" has the same weight as an "action item" in the list, and there's not a typographic or other graphical organizing filter that elevates the important from the fluff. The old outline stucture (see below) was a small help in this.

And you have to click again to find an item's individual listing.

On this third window you can click for the Staff Report, but it doesn't open up in a web browser and instead forces you to open a new piece of software and download the attachment. 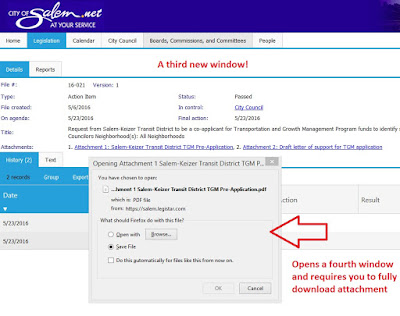 So that basically is double the layers from the previous system, which allowed you to scan an agenda directly and open staff reports to preview in the same instance of a web browser, needing only a new window. It was a "wall of text," it's true, but it was also simple and direct. Even from the screenshots inset here, without enlarging them you can grasp the logic of the old system, but you cannot with the new. It has a different kind of clutter.

For one item the new system may not seem like a problem, but if you want to view multiple Council items this adds a fair bit of new "inconvenience" factor.

Earlier this year, the "Communications and Public Engagement Existing Conditions Summary Report" touched on the fact that the current City website is terrible for mobile users. On the one hand, it seems like reading Staff Reports on a mobile device would be a seriously suboptimal experience, and so the City still might find it best to optimize for the desktop experience, even though that seems so last decade already; on the other hand, this new website doesn't look like it has been "tabletized" for mobile users.

It's premature to say altogether that this new system is a success or failure, but here the first impression is deeply mixed.

Have you checked it out? Maybe you're a power user on mobile? Do you see something about it that makes it instead an unambiguous improvement?
Posted by Salem Breakfast on Bikes at 12:01 PM

Reminds me of agencies that send out emails saying "The agenda is now available on line. Click here."

Why the heck don't they cut and paste the agenda into the email itself? So readers can scan and see if they want to dig further?

To measure click-throughs? Probably not. There's simply no one minding the citizen engagement store. Sigh.

Agree totally with Evan on the need to put the agenda into the actual message. I have complained a lot about this over the years. I get no reasonable answer.

Last week staff for the neighborhoods was asking 'how can we make communication better?' and I made this suggestion, but they just took note and gave no answer.

I saw on the City's Facebook page today that they were bragging about the diversity of Salem with so many different languages being spoken here. But yet they do not publish any information in other languages. For years I asked them to at least do important notices in Spanish since 25% of the population is of that nationality.

Finally after about 10 years of asking I got them to put one sentence in Spanish on the bottom of documents that essentially says, this document contains important information that may affect you, so if you need help call this number..."

When the City was working on this website update...for over 3 years...I suggested that they have a 'citizen panel' to black box their ideas. Nope!

If you are trying to communicate with your audience, don't you think that it would be a good idea to consult with them along the way?

My eldest son worked for many years as a webmaster for a large non-profit. Then he went on to work for a consulting firm in Eugene that designed websites for major organizations like Nature Conservancy and OEA. He looked at the City website and said it was a design nightmare. So, I tried to communicate with the IT staff with some suggestions. The most important being you always test your ideas with the intended audience.

This update cost thousands of dollars and many man-hours. I hope it will be worth it, because it is going to be many years before the City does another revision.

That said, I tried out the one page that you linked to and found it ok, except that a lot of links were not working yet. Hope it gets better soon.