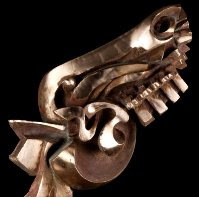 At Council on Monday, the most interesting item is the proposed public art purchase!

But it's also one of the least important - so to the bottom it goes! Considerably less thrilling, but in many ways more important, are the topics of a downtown parking survey and funding sidewalk repair...

Urban Development is presenting the results of a downtown parking survey. The results don't appear to offer any great surprises, but well over half of the respondents are coming from zip codes 97301, 302, and 304; while the outer stretches of these zips may be too far for frequent bicycling, the inner stretches of these zip codes should offer ample scope of short trips under three miles.

There's a significant amount of trips made by car that could be made by bike - if the facilities existed to encourage it! Make it safe, comfortable, and convenient to bike, and there will be more parking available for people who need to come from longer distances.

There's not enough money, and sidewalks occupy one of the lowest priorities. Potholes and congestion get more attention than trip hazards and places where gravel shoulders and ditches exist in place of sidewalks. We badly neglect our foundational level of mobility.

It's not entirely clear whether this represents a reallocation of monies - taking from one area to fund another - or the nearing completion of one subset of repairs and the expansion to a new subset of repairs. I hope it is the latter! (It appears that because of ADA complaints, the City redirected repair efforts in 2009 and this may represent the completion of that redirect.)

In any case, building on the "critical ADA routes" generated from Bike and Walk Salem, the City hopes to start funding some neighborhood sidewalk repairs.

The current priority is this:

1) A complaint from a person with disabilities;
2) Any facilities altered since 1992;
3) Critical ADA Routes as determined through a Title VI process;
4) State and Local Government offices and facilities;
5) Transportation corridors;
6) Places of public accommodation; and
7) Local streets

The new priority would add 30% of funds to local streets:

City staff proposes to spend approximately 70 percent of the program's fiscal year funding complying directly with ADA priorities, and approximately 30 percent its fiscal year funding resuming systematic neighborhood sidewalk repairs on local streets from where it was suspended in 2009. As Bond-funded projects conclude, and higher ADA compliance priorities are completed, more resources will be directed to systematic neighborhood sidewalk repairs each fiscal year.

The Planning Commission voted 4-1 to accept the Fairview Refinement Plan. (See here for meeting notes and here for analysis.)

A subdivision off Wiltsey Road was also approved. Connectivity with Reed Lane, Madras Street, Candy Flower Avenue, Fabry Avenue, and Wiltsey Road were significant issues - if you know the area, it's worth looking at more closely. The letter from the South Gateway Neighborhood Association raises a number of concerns, and I can't tell exactly if they are all addressed.

In March administrative purchases by the Urban Renewal Agency, OBEC got $833K for "engineering services" on the Minto Bridge and Path.

Art's way more fun than parking and sidewalks and roads!

The Urban Renewal Agency proposes to spend $33,000 two works of art for the public.

One of the artists, Weltzin Blix is well-represented in Salem already. He designed the Sprague Fountain on the Capital Mall in front of the Transportation Building.

The City of Salem also has a work at the Civic Center. 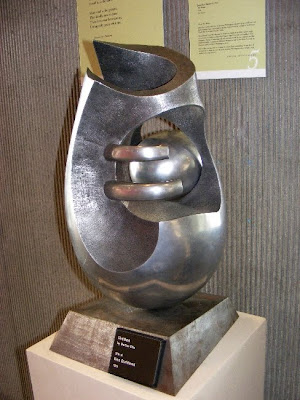 (Untitled, Weltzen Blix, image from the Conference Center.)
The Weltzin piece the City proposes to buy "won the 1984 Portland Art Commission Percent for the Art Competition." So is Portland deaccessioning it? I couldn't find any info on the particular piece, "Break Dancer."

The other piece, a stylized horse skull by Robert Hess, is already on temporary loan in the Sculpture Garden. 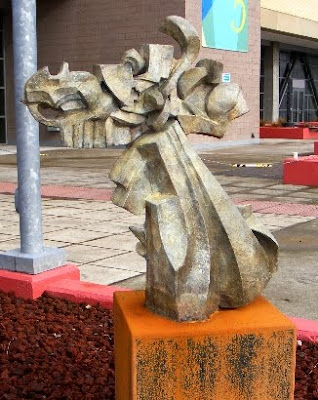 (Skull by Robert Hess at Conference Center
So this isn't really transportation related, but does involve a dead spot in the urban fabric. As the Boise/Pringle Square project gets going, there will need to be attractors that bridge the gap between the Civic Center and downtown proper. A vibrant sculpture garden at the Conference Center could do that. 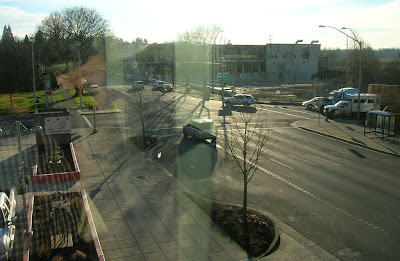 But if the goal is to enliven an underused and even desolate concrete pad, at an important and very wide crossroad that's also pretty much empty (apologies for the crappy photo!), I'm not sure these are the best pieces of art for that purpose. I'm underwhelmed by Blix's work generally and the Hess piece in specific. Even in metal, they make me think avocado, harvest gold, and macrame. The skulls also make me think of eastern Oregon and the desert. Your mileage of course may vary. So much about art is personal taste.

Do these pieces thrill you? It'd be great to hear from folks who love them and especially people who think they are well suited to this particular site.

(Top image, detail of a different skull from Waterstone Gallery)
Posted by Salem Breakfast on Bikes at 12:30 PM