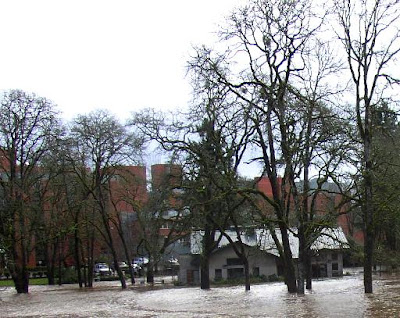 The Vision 2020 Bike/Ped group hadn't met in Pringle Hall since the flooding in January. The hall had been cleaned and you wouldn't know that muddy water had flowed through the hall! (Image: City of Salem)

Mostly it was a check-in and update kind of meeting. Lots of small things, but no real big things.

Did I forget anything?

A traffic engineer sends this sign as MUTCD approved!
Posted by Salem Breakfast on Bikes at 7:00 AM

"The Rivercrossing draft Environmental Impact Statement is scheduled for an April 20th release. There will be a 60 day comment period."

A delicious irony, releasing that so near Earth Day.

As Salem slashes library hours, SK schools lay off librarians and teachers, it's good to know that local governments have the right priorities: promoting sprawl and subsidizing the 1% who own airplanes.

I don't know about the MUTCD, but there are plenty of "Do Not Enter" signs with an "Except Bicycles" sign below them. Here's one on Flickr:

That would probably work. You can see them at the entrance to bicycle boulevards, where auto traffic is one way (out of the boulevard) and bike traffic is two-way.