Pedestrian Impedance and the Invention of Jaywalking

Historians and preservationists are at the Conference Center today and tomorrow. They'll be taking some walking tours of downtown Salem, setting out from one of the worst places downtown to walk: The block bounded by Liberty, Commercial, Front, and Trade - big, busy streets.

So here's a quickie note on a pivotal moment in walking history.

Right around 1920, we see the invention of the wayward walker. The Atlantic had a piece on it a couple of days ago that was making the rounds, and I was curious to see what things looked like around here. 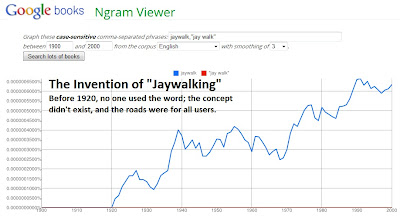 In 1919 the traffic bureau of the Portland Police created a "safety first" film and showed it at the Lyric Theater on January 25th, 1919. "Policemen and others were utilized to show how pedestrians should cross streets at right angles and be careful not to jaywalk and be careless in other ways destined to offer a fine target for the speeding motorist."

In a not too careful search, this was the first local use of the word "jaywalk" I could find in the papers. Not surprisingly, its date jibes with its first use in books.

Jaywalking and making other aspects of walking legally problematic was clearly a product of advertising and PR linked with the auto industry. It was part of a concerted and coordinated national effort to displace blame and make the person walking the problem.

Just three months after the safety film, in April the Oregonian reprinted "a new set of simplified traffic rules for motorists, pedestrians and children" from Detroit, written with the Detroit Automobile Club.

But it wasn't just in the big city. A year later, in April 1920, the Klamath Falls Evening Herald published a note about jaywalking in San Francisco. Soon, it was credible in the large Saturday Auto section to publish a jocular screed arguing for the criminalization of walking behavior. In February 1921, someone could write about the ways people on foot rob the autoist of "joy":


Auto drivers are only human, and even though their cars are provided with all the latest safety appliances, they cannot control tho actions of a city full of racing, scrambling, suicidal, indifferent people, and about the only thing that can bring them to a realization of their danger is an ordlnance that will give Chief Hank Wilson authority to arrest every one who needlessly takes his life in his own hands, even if it takes a couple more jails and an unoccupied- court-house or two to give them jail room.

And it worked. Let's undo it!
Posted by Salem Breakfast on Bikes at 12:01 PM

Others are catching up! Here's Vox on "The forgotten history of how automakers invented the crime of jaywalking."

And here's a great note that pushes "jay walk" back to the 19-teens and, even more interestingly, shows that "jay drive" has an origin and use from a decade prior!