Long before Boise Cascade, and even before the creek was called "Pringle," a mill stood over the mouth of south Mill Creek. It's always been the site of industry.

An old flume yet remains, but not for long.

The Commercial Street bridge over Pringle Creek is going to be rebuilt, with construction starting this summer, and running for two years. While the flume under it may not date back to the old flouring mill, it's another reminder of old Salem soon to disappear.

The new bridge and path will be good, of course, but it's worth taking a moment to think about what was there before. 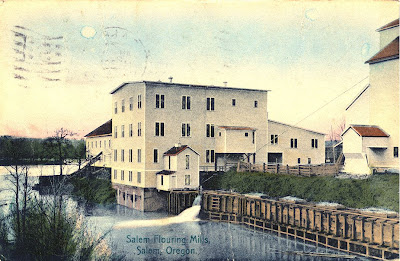 The flouring mill existed on the north side of Pringle Creek, where it empties into the slough. The site is now a concrete wasteland and parking lot, perhaps the fifth or sixth major thing there. The mill was there very early in Salem's history (in a couple of iterations), and a lumber mill just a block away. Lumber rather than flour prevailed and the complex grew into the modern Boise Cascade (see the aerials of Riverfront Park here).

Nowadays, tucked in on the bank under the Fire Station, there is a newer flume, made of concrete and braced with metal. History on it is not easy to find, and it seems likely it post-dates the flouring mill and is related to early lumber milling. 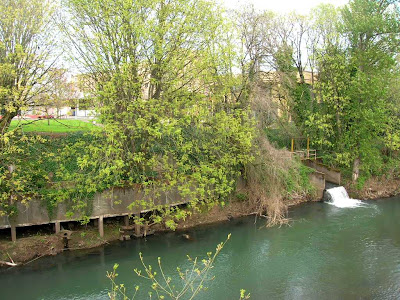 On the grassy bank above the flume is the site of the old Salem Water Company. The urban renewal project effaced it, and no visible trace remains. (Here's a view circa 1900 from approximately Trade and Commercial looking southeast, and a 1940s view from about Bellvue and Commercial looking north.) Apparently some foundations remain, however, buried in the soil, fill, and ivy.

In the cascade of water on the right you can see where, after winding through Mission Mill, the Willamette Campus, SAIF, and Pringle Plaza, the Millrace empties into Pringle Creek.

The flume and vestigial foundations are scheduled to be demolished as part of the construction of the new Commercial Street bridge and a path system underneath it. Some interpretive signage is expected to be installed, fortunately. Already the landscape is so much changed, and while we should not wish for stasis, we should also want to remember what came before.

The plans call for path segments on both banks. Here you can see them on the north and south sides of the creek. The north segment will connect to the sidewalk along Trade Street and Pringle Parkway only, but the south side will be tied into the longer system along the creek through the urban renewal area.

In the cross-section and elevation you can see the location of the flume.

The path is only going to be 10 feet wide and rather twisty. It really won't be meant for bicycling, not at least in any sense other than tootling around with the kids. As a way to go from Bush Park to Riverfront Park without having to navigate downtown traffic, it will be great for families especially.

As a connection to west Salem for commuters? Not recommended.

It will really be for walking, for taking a stroll. And that will be a great thing!

Construction again is scheduled to take place over two years - half the bridge will be blocked at a time, and as you'd expect the impacts to auto circulation drive the schedule.

It's also unclear what will be the schedule for completing the west side in the Boise redevelopment project. 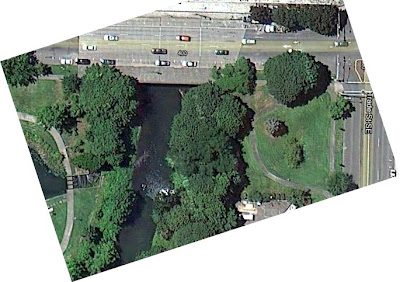 There may be more on tree preservation, spiffing up the brutalist landscape, flume and foundation demolition, building the path on the the Boise side, and other tidbits in a second part!

Thanks for posting this. I have often wondered what this was used for when I have walked or cycled by. I hope that this blighted area of town will change for the better. Right now, it is one of the greatest eyesores in the Valley.

Glad to hear others are curious about it as well!

The archeological report - yes, they do these, and I'll have more in a second note - suggest the flume is even later, post-1950, and used in the pulp and paper manufacturing - maybe even the source of the "effluent" about which we hear so much in the settling ponds.