Historic Landmarks Commission to look at Bridge and Cremains Memorial

In a last minute addition to the Historic Landmarks Commission agenda (so new it's still not on the website), the Salem River Crossing project team is asking the Commission to make an "informal" recommendation tonight.

I think that kinda merits a WTF.

As best as I can tell, the draft Environmental Impact Statement is not officially out. And even it were, the 1000 page document would have been only out for a day or two. No reasonable person could have read it.

So we don't know exactly what buildings and other cultural resources, historic or not, might be be impacted and in what ways. We can make some good educated guesses, but without details ultimately it's all just speculation. 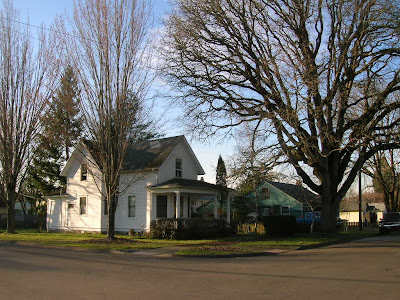 This house would probably be affected by a couple of alignments, but we don't know for sure.

So basically, the Rivercrossing team is asking the Commission to pull an answer out of their nether regions.

Having been continued for a couple of months, the Cremains Memorial at the State Hospital is also on the agenda. Reasonable people may - and passionately do - disagree on it and, in fact, it poses an interesting question about loose and strict interpretation.

Last month the Planning Commission approved a "refinement plan" that they found to meet the letter of the guidelines in the Fairview Master Plan, even if to most observers, including some Commissioners, it rather egregiously failed to meet the spirit of the Master Plan.

A few months before that, City Council approved the vacation of an alley by the cemetery, a vacation that seemed an egregious violation of both spirit and letter.

The restoration and preservation of the historic J building at the State Hospital is one of the glories in the City. It's easy to walk or bike by and the internet is full of pictures of dilapidation and ruin. You can do the before/after easily. You will be amazed.

Back in February you may recall the first mention of the cremains memorial.

One of the buildings not demolished in the Hospital Replacement Project is an 1890s gabled "pest house" and morgue. Mid-century, a sidebox was added. The building was relocated and retained, without the sidebox, for a "1% for art" project that would house and remember the unclaimed remains of those who died and were cremated. 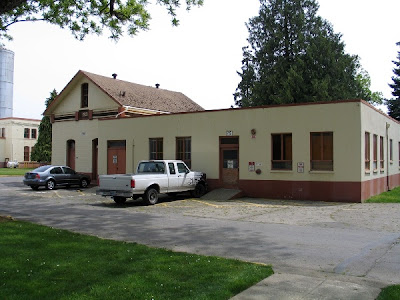 The side of the building attached to the sidebox had large openings cut into it and it no longer presents its original appearance.

The proposed memorial design would open that already altered side and make it into a large window. 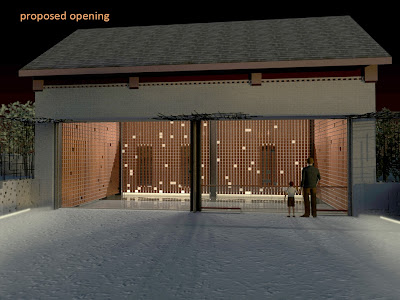 The other three sides of the building would be restored to the original appearance.

Looks like a good compromise! The neighborhood associations adjacent to the Hospital grounds, mental illness advocates, and design professionals praise the plans.

Three historians active in historic preservation locally have written letters in opposition to the plans.

Hazel Patton, Jim Scheppke, and Virginia Green each think there are problems with the proposal. Patton and Green zero in on the north wall.

the present proposed design involves removing historic fabric from a National Register Building....it is a misuse of the building and destroys a very visible and important North side of the building.

Green says that she objects to the

touristic display of [the cremains]. They are arranged around the walls of one room...[and] a fourth wall of this National Register designated building must be demolished....[An] unsightly courtyard is attached to the building on the north side - the view of the building from the hospital entrance. This altered aspect is the one that hospital visitors will see.

Having walked to the building from both the north and west, I prefer the approach from the west and think Patton and Green overstate the visibility and significance of an intact north wall. I don't know, also, what is the parking plan, but visitors may park in the lower lot and approach from the west anyway. I'm not sure there's so much priority for a north approach.

Additionally, Green may forget the idea of pilgrimage. Pilgrims have been traveling to relics and remains for centuries. Her notion of "touristic display" may miss this dimension.

But regardless of pilgrimage or details of landscape architecture, they are arguing for a strict interpretation of preservation guidelines - that whole buildings should remain intact and in as close to original condition as possible. And the historic preservation codes by my reading tend in this direction.

But here I think a loose interpretation is warranted - that the spirit of preservation is better met by modifying the building than insisting on something more static. The chair of the North East Salem Community Association recognizes this when he says that without the memorial and modifications, the building risks ending up "a rehabilitated storage structure." Good preservation requires both a building and an interesting use. The memorial, even with a modified building, is a much better and higher use than a storage structure.

The staff report acknowledges ambiguity and makes a recommendation for a certain measure of interpretive latitude:

While the creation of a viewing window is a significant alteration [the guideline says "alteration of features and spaces that characterize a property shall be avoided"], the applicant's proposal to retain the original portion of the facade, viewable on the interior floor of the building, ensures the character of the building will be retained. Therefore staff recommends that the HLC find that the proposal meets [the guidelines].

The letter from Roger and Bonnie Hull may come closest to the kernel of the proposed compromise. They write

The proposed design retrieves and features the original building of 1896 while alluding to the mid-century changes, thus providing in subtle ways the architectural history of this structure.

It's good to think about this, though. What do you think?

Well, the whole letter/spirit and loose strict things got a little mixed up - not a model of clarity, unfortunately. Not sure I'll go back and clean it up, however - I think the general drift is clear.

The HLC voted 5-3 for a strict interpretation.

'Now the architects designing the memorial have to go back to the drawing board.

“I think what we’re proposing is a relatively minor change, but to historic preservationists it’s the end of the world,” said Daniel Mihalyo of Seattle-based Lead Pencil Studio, who is designing the memorial along with his partner Annie Han.'

'“While the applicants have an infinite number of possible solutions available to them in the realm of design, this structure has only one historic expression,” said David Skilton, who helped place the state hospital on the National Register of Historic Places, in a letter to the commission.'

In a LTE today, Green writes:

the design "is to somehow remove human remains from the urns...and place them in modern stainless steel containers, future location unknown....The emptied copper urns, in continuing colorful disintegration, will be an artistic display, lined up side-by-side, floor to ceiling, inside the building on the remaining three sides, covering every window. Thus the fourth wall of this National Register designated, historic structure must come down to bring light inside this theatrical stage set....Building 60 will attract curiosity, not respect."

The prospect of a transfer of remains hasn't got much visibility and deserves a whole lot more attention.