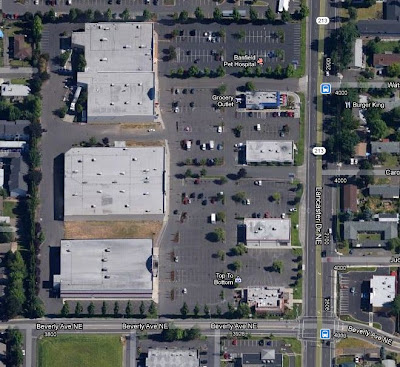 But zoning variances and the associated planning apparatus sometimes can offer important gaps in the status quo and may create moments for incremental improvements. At the same time, the language is opaque to amateurs and it's hard to know how to break through. Here's a notice for a May 9th hearing.

A consolidated request for a VARIANCE to reduce the number of required off-street parking spaces for a proposed physical fitness facility...from 180 spaces to 60 spaces, and a Type II SITE PLAN REVIEW for the change of use from a furniture store to a physical fitness facility, for property approximately 3 acres in size, zoned CR (Retail Commercial" and located at 2787 Lancaster Drive NE.

As you can see from the map, there's a large surface parking lot fronting the big box stores. The middle building is the one in question. Since there's already a large parking lot that should more than adequately serve the building, it's not immediately obvious what it would mean to reduce the parking from 180 to 60 spaces. The City clarified by email:

Off-street parking for a multi-tenant complex can be tricky. If you had 4 businesses and each of them required 25 spaces, the minimum parking would be 100 spaces. Let's say that the shared parking lot includes exactly 100 spaces. That situation meets code and is fine. But some tenants require more parking spaces than others. If one of those businesses moves out and another moves in with a requirement for 50 spaces, then the scenario no longer works, because the development would require 125 spaces while only providing 100.

That is what is going on in this situation. The variance is to reduce the parking requirement for the fitness center, because there would be more spaces required for the multi-tenant complex than are existing in the parking lot.

It sounds like everyone recognizes that there's no need for extra parking here. This is probably the kind of variance and hearing that makes people frustrated with government "red tape." It's a no-brainer, right?

At the same time,

Pursuant to SRC 163.070(b), approval of a TYPE II SITE PLAN REVIEW application shall be granted if the Hearings Officer finds that:

(3) Parking areas and driveways are designed to facilitate safe and efficient movement of vehicles, bicycles, and pedestrians...

Lancaster Drive is on the short-list of worst places in Salem to walk and bike. With a grocery store on the block, a fitness club ought to be a high-level destination for people on foot and on bike. McKay High School and Park is also very close by. On the south edge of the development, Beverly has been identified as a candidate for tier 1 bike/ped improvements in the proposed update to the Transportation System Plan.

So the question is, since reducing the demand for car parking here is a good idea, what can be done incrementally and fairly to improve facilities for people on foot and on bike? Covered bike parking? Sharrows on Beverly? What do you think? 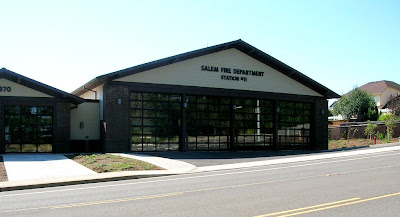 It is perhaps more than trivially interesting that at the same time we are talking about a giant highway and bridge to facilitate development in West Salem, we are also talking about closing or reducing hours at one of the fire stations and the library in West Salem. It's probably more than just a coincidence, you know? Some commentators have seen evidence for a nefarious design by the City, but the reason may be more basic and structural. It is possible that we are seeing clear ways that development there has outstripped the infrastructure and the City's ability to pay for it.

If we can't afford the fire station, how can we afford to overbuild a bridge and highway - which will induce more demand and more development on the edges?
Posted by Salem Breakfast on Bikes at 6:30 AM

More evidence that we are "spending like it is 2007" when it comes to keeping up the illusion of "eternal progress through the automobile," but robbing Peter to pay Paul in the process. Sadly, Salem seems bent on learning most lessons late in the game.

The City adds detail on the Fire Station decision:

"City-wide in 2011, 77% of fire responses were for medical calls; 2.3% were for fires; the rest of the responses were related to hazardous conditions, mutual aid, etc. Last year, the busiest fire station responded to 1,592 priority calls. Fire stations 8 and 11 were the least busy, with 510 priority calls at Station 8 and 368 at Station 11. This is why these two stations were initially planned to be staffed at 40 hours/week during the day when most calls occur, the schedule initially used at Station 11. We were not able to reach agreement with the Fire union on the same contract language used earlier with Station 11 so we must now move to a different deployment model."