In the News: Long Commutes; the Crisis in Walking; Bike Salmon

I knew Salem Ore was a commuter town, but I had no idea how many until I wrote this story. #SalemORstjr.nl/I129BQ

Yesterday Michael Rose's "Company Town" column checked in with the second entry, and it's another solid contribution. 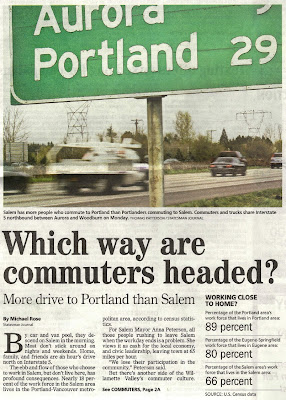 33% of those who work here live elsewhere. And another chunk of people live here but work elsewhere, so the total proportion of people who both live and work here is much smaller than 2/3, perhaps as little as half or less.

There's a rootlessness to Salem, perhaps, something transitory at its core. Even if people don't view themselves as transitory, and even if the net movement of people between Portland and Salem is closer to an even exchange than outright loss, Mayor Peterson's point about people with long commutes having less time for civic participation stands: There's fewer people and less energy for volunteering, for grass-roots politicking, for following local issues.

Those with long commutes are prone to being tired and cranky!

So that's another reason to want a transportation system, housing stock, and an economic system in a more compact configuration - less time on the commute means more time for family, neighborhood, and city.

Former Salemite Michael Ronkin led off Tom Vanderbilt's 4-part series in Slate on walking, "The Crisis in American Walking: How we Got off the Pedestrian Path." Later in the piece, Vanderbilt says:

Simply by going out for a walk, I had become a strange being, studied by engineers, inhabiting environments whose physical features are determined by a rulebook-enshrined average 3 foot-per-second walking speed, my rights codified by signs. (Why not just write: “Stop for People”?) On those same signs in Savannah were often attached additional signs, advising drivers not to give to panhandlers (and to call 911 if physically intimidated), subtly equating walking with being exposed to an urban menace—or perhaps being the menace. Having taken all this information in, we would gingerly step into the marked crosswalk, that declaration of rights in paint, and try to gauge whether approaching vehicles would yield. They typically did not. Even in one of America’s most “pedestrian-friendly” cities—a seemingly innocent phrase that itself suddenly seemed strange to me—one was always in danger of being relegated to a footnote.

Which is what walking in America has become: An act dwelling in the margins, an almost hidden narrative running beneath the main vehicular text. Indeed, the semantics of the term pedestrian would be a mere curiosity, but for one fact: America is a country that has forgotten how to walk. Witness, for example, the existence of “Everybody Walk!,” the “Campaign to Get America Walking” (one of a number of such initiatives). While its aims are entirely legitimate, its motives no doubt earnest, the idea that that we, this species that first hoisted itself into the world of bipedalism nearly 4 million years ago—for reasons that are still debated—should now need “walking tips,” have to make “walking plans” or use a “mobile app” to “discover” walking trails near us or build our “walking histories,” strikes me as a world-historical tragedy.

What to do about wrong-way cycling? Advocates, hipsters, and vehicular cyclists mock it as bike salmoning.

But to many it seem the most natural way to go.

A Letter to the Editor defends bicycling against traffic for this reason.

The comments on the letter attest to the prevalence of this sentiment. The fact that so many continue to want to bike this way is also evidence for how crappily the roadways accommodate non-auto travel.

Still, information and education has an uphill climb against fear of the unseen.

The two deaths of people on bike in Polk County this year have been caused by rear-end crashes. That seems like a big problem. Fear of a rear-end crash is a significant barrier to bicycling for many people. And because a person might see on-coming traffic, one feels more confident about evading the threat while bicycling wrong-way.

But in aggregate you are more likely to be hit on a bike from the side or the front than from behind. It's more about what car-drivers can see and expect to see than what a person on bike can or cannot see. 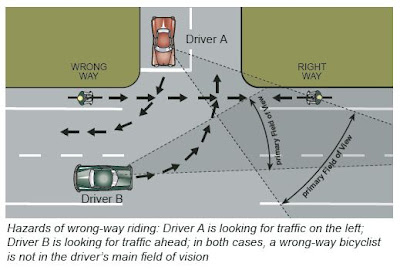 (Image from Oregon Bicyclist Manual.)
Posted by Salem Breakfast on Bikes at 6:45 AM

Looks like one more argument in favor of separated bikeways. If some separation is added in the form of a cycle track or a buffered bike lane, most of the fear about being rear-ended on your bike goes away. Salem has a large contingent of "salmon" bicyclists who would seem to benefit from separation.
Gary

So we are financing a $99 million dollar road bond with property taxes. 98% of it looks to be aimed at increasing capacity for commuters who don't even live here to pay property taxes. The increasing capacity is making our streets more dangerous and less livable for those of us that live here 24/7. Ummm... Social engineering, income redistribution, regressive taxation, etc.