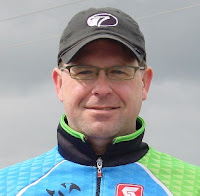 Here's a nerdy little detail that illustrates some of the behind-the-scenes bureaucratic and administrative wrangling that can be involved in changing the system sometimes.

Many of you will recognize Scott McCanna from the Salem Bicycle Club and OBRA circles, but you may not know he's also works for ODOT. (Image: Willamette Valley Cycling Team)

Recently a news item came across about a mid-March meeting of the Oregon Traffic Control Devices Committee. One of the discussions was about adding a wrinkle to a sign used in temporary traffic control during road construction.

Apparently the "bikes on roadway" sign exists only on a roll-up material. 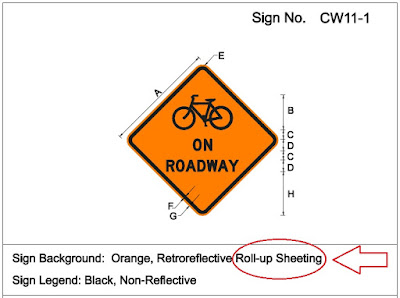 The committee needed to discuss and approve putting the sign on rigid backing material.

In a large state agency, it's not always possible to make changes quickly and easily, and it's important to keep that in mind as we so often get impatient for change!
Posted by Salem Breakfast on Bikes at 12:01 PM

I'm encouraged to finally see this topic being elevated. Few bike riders appreciate the complexity involved to bring about change in the public works realm.
I'm involved with a linear utility project that will take a full lane of traffic + bike lane out during construction. It's a heavily used bike corridor and I'm looking for ways to beef up the traffic control plan to address the high volume of bike commuter traffic. Recently saw signage on another local project directing cyclists to "merge with traffic" where the contractor was using the bike lane for staging/stockpiling. What are your thoughts about this? I am also looking for ideas how to address bike traffic with a flagger.

Good for him! It's people like this guy that makes the world a better place to live in, even if it's a small step in that direction.
-Jon @ construction site safety