The Council Finance Subcommittee met earlier this week and the draft was a major topic. (Full meeting packet, 100+ pp. here.)


is a five-year plan for financing major public assets based on City-adopted master plans, goals and policies. The purpose of a CIP is to match scarce financial resources with the capital needs of a growing community and to preserve or enhance existing capital assets to provide efficient city services.

The "Keep Salem Moving" bond is run through now, so our total projected transportation spending is down and the project list is smaller. 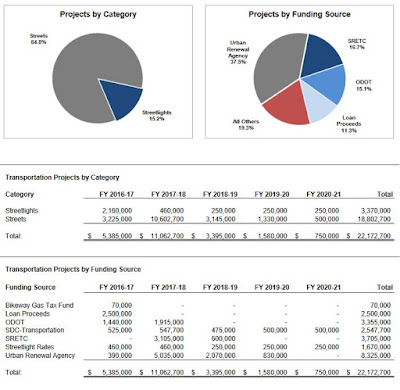 The Urban Renewal Agency and its funding is now the largest driver of transportation projects.

(By comparision, here's the same table from a few years back...the dollar amounts are a lot bigger! It's interesting that because of reduced driving and lower gas prices the 1% bikeway fund dropped from $94,000 to $70,000 in 2016-17 in the four years. The SDC dollar amount is a lot different, too, but I'm not sure that's significant.)

There was only one surprise in the list, and I will have to do some research to see if it really counts as a surprise - maybe it is just something I missed.

It will not be at all surprising if that has to fish around for another source of funding.

There's a bunch of projects out by the Mill Creek and "Sustainable Energy" office parks, and it's hard not to feel these are just a waste on what will eventually be stranded assets and infrastructure.

There's information on the next two "art pedestals" for downtown, to be located on Commercial and Court, and on Center and High.

Our dinky little gas tax allotment for bike infrastructure will go towards the bike lanes on High and Church downtown. Which is appropriate.

Finally, there remains the mystery of just what constitutes "enhanced bicycle facilities" on Union Street between Commercial and Winter. The latest information suggests sharrows only, but I am hopeful this turns out to be wrong or is revised.

Candidate projects to be added to the CIP when funding is secured or confirmed:
New funding sources:
This is a draft, so there will be more discussion and revisions later to come.

Also, folks who are following the Police Station may be interested in the Finance Committee's discussion of bonding. 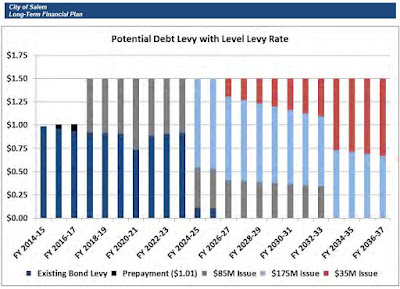 Just to be (un)clear, there's not enough context in the slides to know what exactly is being discussed here, but there's a series of charts that show future possible bonds. Here's one with an $85 million bond starting in 2018 - the Police Station, I bet! - and a $175 million and $35 million.

What's going on here exactly? The $175 million is probably a transportation successor to the 2008 "Keep Salem Moving" bond, but it's bigger and probably contains some Third Bridgery, so that's something to watch. I don't know what is the probable nature of the $35 million.

This is mostly beyond our scope here, but I suspect some readers may find this of interest.
Posted by Salem Breakfast on Bikes at 7:00 AM

This is the one that has me peeved: The Lone Oak Bridge, down in extreme South Salem. We are going to be paying $650,000 because a very wealthy developer doesn't want to pay for infrastructure that will only benefit his development. Unsurprisingly this developer has been a large contributor to local politicians and in return has received large tax abatements, the most recent being the Boise Cascade site.

This bridge will only benefit a very small number of people and does not benefit the city as a whole. The development in question was built in an area which is inaccessible when there is ice and snow. Now the developer of the property is getting this bridge built for them because they built a development in a place inaccessible at certain times.

Apparently it's on the agenda for April 11th -

And a better pdf of the CIP itself -