While the roadways and suburbs and vast highways sometimes all seem part of the "natural" order of things, this classic 1954 propaganda from General Motors shows just how much persuasion and social engineering went into mid-century development patterns. 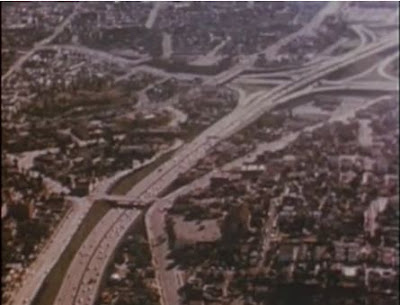 "This is the American Dream, of Freedom on Wheels." (You can hear the Capitals of Great Metaphoric Significance, as a friend says.)

The irony now is rich, and it's nearly impossible to watch and listen to it straight. Freudians, too, might be able to mine it for great comedy. (Talk about permissiveness! It's titled, Give Yourself the Green Light.) What's your favorite part?

Give Yourself the Green Light via the Atlantic and Prelinger Archives
Posted by Salem Breakfast on Bikes at 10:00 AM

My how times have changed: http://bikeportland.org/2012/04/05/odot-transformation-continues-no-more-highway-division-69928

And when I'm getting this forwarded to me from city council: http://www.oregonlive.com/opinion/index.ssf/2012/04/where_were_going_america_doesn.html

Along with the USPIRG report it has to make you wonder... Has our narrative gone mainstream?

"it can't carry the mounting traffic of our growing greatness!"

The "growing greatness" was a favorite, too!

It would be terrific for the SJ to reprint the Sirota piece, especially to coincide with the Rivercrossing draft EIS.

As for ODOT, I'm waiting for the walk - for them to walk the talk and walk back on the crazy rivercrossing schemes they've got going. By the budgets, we will know real progress!

(Still, did you see the Bike Snob review in the SJ today?! I'll probably post on that separately! To see that in Salem is indeed a sign of changing times.)