Council meets on Monday, and between the water rates Public Hearing and the SRC Public Hearing on the 12th, there's not a lot of room for other things. 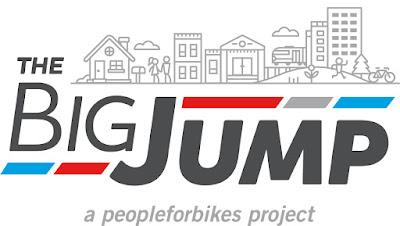 But one item is particularly interesting. The City is going to make formal application for the People for Bikes "Big Jump" project.


The Big Jump Project is a three-year effort to help 10 places achieve a big jump in biking – a doubling or tripling of people riding – by building a network of safe and comfortable places to ride and engaging the community. The goal is also to validate a core concept: that if a city does all the right things, more people will ride and the community will be a better place to live, work and play. The Big Jump team is looking for 10 places that will achieve great things for biking between now and 2020.

The City proposes to focus on


the area generally bounded by Salem Parkway to the north, 12th Street to the east, Bush’s Pasture Park to the south, and the Willamette River to the west. This focus area meets many of the interest areas prioritized by the Big Jump Project, including safety, access to jobs in neighborhoods with concentrations of low income residents, connecting to paths and parks to encourage physical activity, and growing tourism.

One part that is not directly addressed in the City's materials is the local funding partner. People for Bikes say


Applicants are highly encouraged to include a local funding partner as part of their leadership team and include a letter of commitment from them with their application package. The participation of local funders has two primary benefits: the project will be more effective with additional resources, and local funding is a strong indicator of local support.

The level of financial involvements may vary community by community, but we are suggesting local funders participate at $50,000 per year over three years - a total investment of $150,000. Local funding partners are welcome to contribute at higher levels than the suggested annual contribution. We would encourage local funders to reach out to us directly about the appropriate levels of participation and any unique ongoing efforts that might be leveraged during The Big Jump.

Since there is not an entity other that the City involved, the City of Salem must be the partner, but the Staff Report to Council or draft letter from the Mayor is not clear that there is a recommended/required local match.

As I read the draft letter from the Mayor, it is rather unfocused - it is a draft - and not written from the standpoint of someone who actually bikes and who understands the real assets of Salem's network and the real deficiencies:


Please receive this letter as a statement of my excitement and enthusiasm for the City of Salem’s application to participate in The Big Jump. The work that People For Bikes will be doing through The Big Jump program is vitally important to cities that want to establish a comprehensive bicycle network for their residents. Salem is one of those cities.

The City of Salem is home to a vibrant bicycling culture comprised of riders of all ages and skill levels. We have worked tirelessly to provide first-rate bicycle facilities city-wide to meet the needs of our bicycling community. Our transportation network includes a bicycle lanes and multi-use paths designed to ensure that all users can access Salem’s commercial and recreational attractions. We have supplemented that network with amenities such as bike racks, bike lockers, and a newly updated bicycle map. The Salem City Council recently adopted a resolution naming Salem a member of the Healthy Eating Active Living (HEAL) program, which will make Salem eligible for grants to be used on upgrading bicycle infrastructure.

The City of Salem’s goal for The Big Jump is to study our downtown in order to maximize the efficiency of the existing network and to identify opportunities for growth. We seek to improve the bicycle connections between downtown and the other areas of the city in order to provide users with access to everything Salem has to offer. A major connection set to be completed in Fall 2016 is the Peter Courtney Minto Island Pedestrian and Bicycle Bridge. Once completed, this bridge will connect downtown Salem to 1,200-acre Minto-Brown Island Park and its 19 miles of trails. I believe The Big Jump is a wonderful opportunity to get the best out of this new bridge and other potential connections.

I would like to reiterate our energy and enthusiasm for bicycling and for the possibilities that would be opened by our involvement in The Big Jump. This great program can help the City of Salem to get the best out of a strong existing bicycle network, as well as to educate our entire population about what is available to them. On behalf of the City of Salem I thank you for the opportunity to apply for The Big Jump, and I eagerly anticipate becoming involved in this important effort.

I key on this: "The City of Salem’s goal for The Big Jump is to study our downtown in order to maximize the efficiency of the existing network and to identify opportunities for growth. We seek to improve the bicycle connections between downtown and the other areas of the city in order to provide users with access to everything Salem has to offer."

But we already have the Downtown Mobility Study's recommendations for improved connections downtown. Our current problem is less a matter of developing a plan for connections, and more a matter of actually funding and constructing the connections we already have in our plan. Big Jump says the "support package and services offered as benefits of joining The Big Jump Project is valued at $250,000 annually per community." But that's not actually going to fund and construct anything. Maybe it could be design services, but without a stronger commitment from the City to fund and construct already existing plans, I'm wary of the puffery in "our energy and enthusiasm," which hasn't actually been "tireless" and visible in much, and is directly contradicted by our commitment to the SRC, which will harm bicycling citywide. It seems important also to note that the HEAL grants are "six grants statewide in amounts between $5,000 and $15,000" and if we got one, that's not large enough to construct any upgrades in bicycle infrastructure. That's a few sharrows maybe.

So. At the moment I don't read this as a strong and thoughtful application. At least 92 cities intend to apply, so it will be competitive. I read ours more as PR than as a substantial new commitment to bike transport downtown and close-in. Your mileage may vary. You might be more optimistic about it. Maybe with the work of the Salem Bike Boulevard Advocates, as well as the prospects created by a new City Council in January, something like this can really be forward-looking and escape our current horizons. Applications aren't due until the 28th, and so there is time to refine and strengthen an application from Salem.

(Unfortunately, the SRC merits most of the attention right now, and it would be nice to linger more on this and more on a couple other things at Council. So this will get lost a little. Maybe SBBA will have more to say on it.)
Posted by Salem Breakfast on Bikes at 6:30 AM

As quoted in the SJ's article -

'“We’re not planning any type of a cash-match at this time," said Mike Gotterba, a spokesman for the city. But if Salem were approved for the program, city staffers would go out to promote cycling initiatives, an indirect use of local government funds toward the project, he said.'

I would vote we create a more safe route from down town Salem to Chemeketa Community College for both students and employees.

Any route that would go from Salem to Chemeketa would happily improve the cross town bike lane situation.

Sharrows are about $300 ea. Possibly cheaper in bulk or on a state contract.